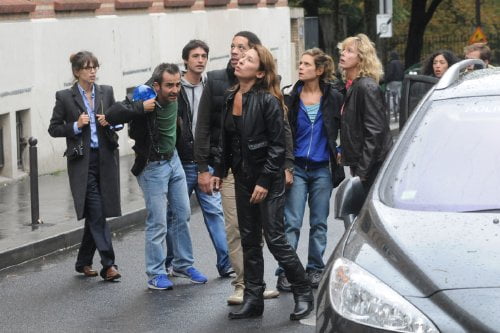 The Child Protection Unit of the Paris police is a dedicated team of law enforcement professionals responsible for the safety of the children of the city. Daily, they must deal with child abuse, adult molestation and rape of children, juvenile thieves and teenage prostitution. Their work is taxing and they get together after work hours to blow off steam, laugh, sing, dance and brawl in “Polisse.”

They work together, play together, flirt with each other and sometimes end up together which makes the Paris Children Protection Unit just like a dysfunctional family. Cowriter (with costar Emmanuelle Bercot)/director/actress Maïwenn ("All About Actresses") http://www.reelingreviews.com/allaboutactresses.htm immersed herself in their culture after seeing a television documentary that drew her to the subject and has made a great leap forward as a filmmaker, winning the 2011 Cannes Jury Prize for "Polisse." This docudrama features a large, engrossing ensemble captured both on the fly and in closeup by two to three digital cameras (Pierre Aïm, Claire Mathon and Jowan Le Besco) and the audience is thrown right into the action, beginning with the interview of a pretty little thing whose daddy may or may have not done something inappropriate. Maïwenn establishes right away how difficult it is being an advocate for children's safety. It is a challenge to get a clear story from a child who may not even recognize their own victimization, but the obstacles also include other police departments who not only look own upon them but get priority on valuable resources and a chief, Beauchard (Wladimir Yordanoff, "The Taste of Others," "The Hedgehog"), busy playing politics. The crew is introduced as Maïwenn's ("The Fifth Element," "High Tension") character of Melissa is. As the newest member of the team, she'll be responsible for photographic evidence, playing the director as photojournalist. Her position here is uneasy, as it's made known that her boyfriend is responsible for the gift now hanging in the Chief's office. After meeting the newbie, we get to know these cops through their partnerships. Nadine (Karin Viard, "Time Out," "Potiche") is getting divorced after catching her husband Hervé (Laurent Bateau, "The Concert") cheating and she's being staunchly supported by Iris (Marina Foïs) who is hiding her own problems. That initial interviewer was Chrys (Karole Rocher, "Stella"), whose partner Mathieu (Nicolas Duvauchelle, "Wild Grass," "White Material") clearly wishes he were the father of her unborn child. Fred (Joeystarr, "All About Actresses") is the group's most vocal, identifying as he does with the immigrants of the Beauville district. He adores his daughter, but argues with her mother, Céline (Carole Franck, "The Names of Love") and takes out his frustrations after one long day's work on Melissa. Three partnerships, three love triangles of a sort. There is the Romanian (the word 'gypsy' is notably avoided) running his camp's children as a pickpocketing gang, the girl whose grandfather's story keeps changing as she refuse to capitulate and the wife (Sandrine Kiberlain, "Mademoiselle Chambon") who turns in the husband (Louis-Do de Lencquesaing, "Father of My Children") whose daughter tells her 'loves her too much.' (This latter arrogantly tells the cops he has connections only to have Beauchard tell them to 'go easy on him' not five minutes later.) A full day and night of tracing a baby kidnapped by its drug-addled mother causes all kinds of frictions that result in celebration when the child is delivered from harm. The cops recoil in horror as a 14 year-old professional defends the sex trade as the way it is, yet collapse in hysterics when a schoolgirl the same age recounts how she gave out blow jobs to get her stolen phone back. These are genuine characters, all showing the various ways they release steam from the toll their work takes. A scene is a disco is a stunning achievement, each character defining him or herself on the dance floor or its sidelines (it is here that old pro Fred and Melissa make their sexy connection). Early on, we see lesbian Sue Ellen (Emmanuelle Bercot) cautioned on her alcohol consumption and keep an eye on her ourselves ever after. These dedicated cops' lives are as messy as the ones they come into contact with work, the stresses compounded. There is a series of eruptions in the film's last act. Nadine boils over when Iris drops a comment about her idling on Facebook, having allowed Iris's strong feelings to manipulate her own marital decisions and Nora (Naidra Ayadi) becomes militant when pitted against a Muslim who felt he had the right to control his under age daughter, railing against the failures of her own people. When faced with Chrys's husband at a joint operation, Mathieu shows his weakness - when he is shot, Chrys barrels to his side. These scenes are more effective because Maïwenn lets her audience connect their own dots, never spoon feeding information. Instead we get the pleasure of seeing situations come into focus, prior unmoored tidbits now valuable building blocks. Editor Laure Gardette ("Caramel," "Potiche") often uses visual motifs to segue from one scene to a completely different one, giving a nice flow to a story which is actually continually upending us. Only once did this trick confuse, when a strong resemblance between actress Franck and the rape victim who follows left me finding my bearings. Maïwenn, who used real CPU cases to build her film around, has made a dynamic, human story with tremendous momentum. Her cast is terrific, with Joeystarr a first among equals (the film also stars Frédéric Pierrot ("I've Loved You So Long") as unit head Baloo, "Declaration of War's" Jérémie Elkaïm and Riccardo Scamarcio ("The Best of Youth") as Melissa's commitment-phobic 'partner'). But the film's very last act features a shock ending where crosscutting between the CPU and one of their rescued victims illustrates that while many of these kids land on their feet, their saviors often don't. Here Maïwenn seems more concerned with the artiness of the point she is making than having that point derive from sufficiently organic ground laying. Still, it's a minor nit on a film that more than earns its grit.

Based on actual CPU cases, actress turned writer-director Maiwenn (Le Besco) sets the tone for her story about the players in this specialized unit of the Parisian police. Their boss assigns a photojournalist, Melissa (Maiwenn), to chronicle their day-to-day trials, tribulations, successes and failures and the photographer soon becomes one with the dysfunctional child protection people, especially brooding Fred (Joey Starr). The film shuffles between getting to know these cops and the many cases they must face in increasing numbers. The cases that CPU investigates usually begin with interviews with sexually abused children – this can be stomach churning at times – and with those that abuse them – also stomach churning. After the interview process the CPU detectives follow up on the information that results in the children protected, the abusers arrested and more cases piled on them. This path is the most compelling and socially relevant and represents the heart of “Polisse.” The other path revolves around the after hours lives of the CTU members. They are a closely knit family and they act just like a large and loud family – on steroids. A family fight is not just a lot of shouting. With their emotions fueled by copious amounts of alcohol, bickering becomes full-fledged fist fights as they blow off steam after their daily grind protecting children from adults. As in many families, there is jealousy, envy, caring, impatience and patience. This family, though, is heavily armed. A number of set pieces – a cop sing-along in their cop bar, one time, and a cop dance off another are two that, to me, seemed forced and staged – are used to show the interactions between the men and women in CPU. Maiwenn shows the dedication of the detectives to their wards when the adult molesters/rapists try to explain why they do the things they do to their children. “We don’t care” is the cold-eyed reply by the detectives who have seen and heard it all before. The large ensemble cast works well, especially during the many investigations, but the photographer Melissa character feels forced, an indulgence by the filmmaker, I think.