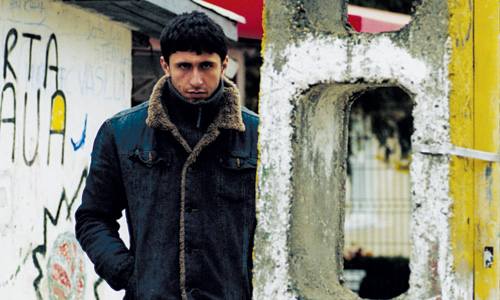 Undercover cop Cristi (Dragos Bucur, "The Death of Mister Lazarescu") is being pressured by his superior Nelu (Ion Stoica) to arrest a teenaged student, Viktor (Radu Costin), who's been smoking weed with some friends. Cristi believes it makes more sense to trace Viktor's dealer rather than ruin a young man committing a harmless crime's life, but the Romanian state disagrees. Cristi's Captain, Anghelache (Vlad Ivanov, "4 Months, 3 Weeks & 2 Days"), pulls out a dictionary to convince him in "Politist, adj."

Cowroter/director Corneliu Porumboiu had a playful look at rewriting history in his last film, "12:08 East of Bucharest." In a more serious vein here, he looks not at the aural nature of verbal storytelling but at the written word, and how it is used to set tone. Many have complained of the drawn out nature of "Police Adjective," which seems to accompany Cristi's stakeouts and bureaucratic legwork in real time, but the film is gripping - just like those small words add up to bigger meaning, so does Porumboiu use small details to create a larger portrait. From the opening credit sequence - white letters against a black background - which suddenly segues to a gray landscape every bit as stark, Porumboiu is tonally in control. Along with his cinematographer Marius Panduru ("12:08 East of Bucharest"), Porumboiu finds beauty in the ugliness of institutional, bloc housing. In one shot, a horizontal crack in a wall zigzags like a living vine on the left side of a frame while the right hand side is all sharp angles. In cool "Cache"-like observation, the teenagers being watched are foregrounded by a higher energy scene of little kids playing soccer, a pictorial in looking beyond the obvious. The director uses sound craftily too, such as how he builds tension with the motor of an unseen car coming up a hill. Both come into play with an extended shot of Cristi eating his dinner at the kitchen table, partially obscured, as we hear the trite pop song his wife Anca (Irina Saulescu) is playing in their bedroom - the scene is amusing, but also reminiscent of Polanski's shot of Ruth Gordon on the bedroom phone in "Rosemary's Baby." When the scene does shift into the bedroom, it's a surprise that the song is being played on a computer instead of a phonograph, and, as he does in both scenes with his wife, Cristi debates word usage, here the lyrics to the song. The modern flat screen monitors Cristi and Anca have at home are the opposite of the outdated CRTs Cristi accesses at work, a reflection of Cristi's modern thinking vs. the police state still in effect. The film is interrupted for extensive shots scrolling the length of Cristi's police reports, his written word (narrated) both stating exactly what happened in infinite detail while also projecting his own opinion. This device is echoed by the film's final, most densely dramatic scene when Cristi's use of words is turned upside down by Anghelache wielding his dictionary and even we are surprised by the emotions we have invested into the meaning of the words 'conscience,' 'moral' and 'law.' "Politist, adj." is a very thoughtful film with a slow build to a powerhouse ending. Porumboiu's screenplay is one of the most devious and delightful of the year.