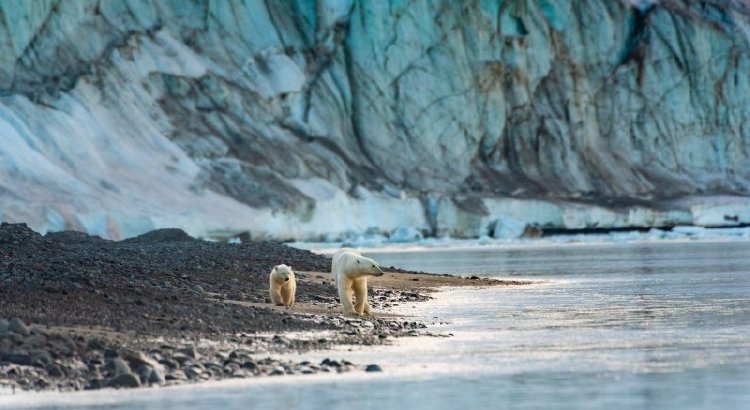 A new mother reflects on everything her own mother taught her about surviving in this world as she begins to do the same for her own daughter.  But the challenges are great when your environment is the Arctic which has changed dramatically in the span of the lifetime of a “Polar Bear.”

Disney has been noting every Earth Day for almost twenty years with a release under its Disneynature label.  Unfortunately, outside of some truly outstanding nature photography, most of them haven’t been very good, as is again the case with the latest from the directing team (Alastair Fothergill, Jeff Wilson) and writer (David Fowler) behind Disneynature's disappointing 2019 effort "Penguins."  The same problems that have marred earlier efforts crop up here – simplistic anthropomorphization and an overly kid friendly approach that is light on facts – but this one is also haphazard in its timeline and continuity.

Catherine Keener, haltingly assuming the voice of a female ‘ice bear,’ looks back on life with her mom and twin brother cub in the Arctic, a life which consists mainly of a continual hunt for food balanced with abundant play.  The film is at its best illustrating the adult female polar bear stalking seals, suspenseful sequences which climax with a bloodless success, edited for the eyes of young children.  There is an unexplained death (starvation?) hastily dealt with.  Then the female cub is ‘told’ it is time for her to go off on her own and we observe her eventually pairing off with a male, then embracing motherhood.

We do learn that seals, the major source of food for polar bears, need ice to breed and that that ice is quickly vanishing (a post credit title informs us that there will be no ice in summer as early as 2040).  We also discover that polar bears are now often forced to hunt for ‘small scraps,’ as shown by an adult male clinging precariously to a cliff to raid bird nests.  But the filmmakers do not really get across the urgency of the situation.  The documentary is also choppy, Keener’s narration suddenly jumping to her adult incarnation for all of fifteen seconds before returning to the cub story where the cub seems to grow and shrink and grow again.

Much of the footage is really worthwhile.  There are majestic overhead shots of polar bears swimming which reveals what graceful creatures they are and the cubs and their big ungainly feet are adorable.  We also see stunning landscapes, the darkness of winter enlivened by the aurora borealis.  But when a story is fabricated around this footage that coasts on a bumpy surface, imagery alone isn’t enough.

Climate change in the Arctic and a momma polar bear struggles to raise her two cubs, a girl and a boy. The ice flows are melting away and, with them, the seals that the tiny family depends on to survive. Their very existence is threatened, because of man, in “Polar Bear.”

This is the 16th entry in the Disneynature franchise and, to me, is squarely aimed at the 4-8 year old crowd. This is a problem, though, for anyone older than said age group who want a bit more depth. Directors Alistair Fothergill and Jeff Wilson previously co-directed (with Mark Linfield) the popular “Penguins (2019)” with its cast of millions, well, at least thousands.

The latest entry in the nature franchise lacks the plethora of tuxedoed flightless avians and, instead, focuses, almost solely, on the mom and her babies in the ever-changing and threatening wilderness. The starkness of the terrain and near total isolation of the subjects lacks a backdrop of the vigor and vitality of Mother Nature. Instead, we see a world that is slowly (or, not so slowly) dying and its inhabitants either struggle to survive or succumb.

What should be a much stronger indictment against climate change is primarily an anthropomorphic treatment of the tiny family of white bruins and falls far short of its message potential. Instead, we get a run of the mill nature documentary that sheds little light on the issues but has lots of the cute cubs frolicking and gamboling and mom trying to feed them. It is a tough life but I never got the sense of urgency, just bears being bears, which the aforementioned 4-8 year old demographic will love.