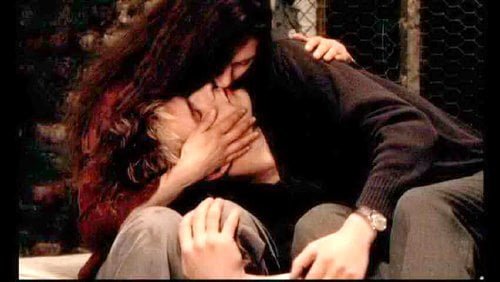 Years after going to movie jail for cost overruns on the lavish "The Lovers on the Bridge," Carax returned without his usual collaborators and their absence is felt. While the filmmaker's themes about love against all odds are still here, it is difficult to care about any of these characters. Unlike the Alex trilogywhich were original works by Carax, this film is an adaptation of a Melville novel, and an unusual one at that ('Pierre, or, the Ambiguities' ) about a man who goes to ruin for the love of his sister. The novel didn't do well for Melville and it doesn't serve Carax either. Guillaume Depardieu ("The Duchess of Langeais") has seemingly been directed to be Denis Lavant, which he is not. (In an eerie bit of life imitating art, the actor was in a motorcycle accident, as his character is in this film, which eventually cost him a leg.) Catherine Deneuve is made to ride a motorbike, which she clearly is not really piloting. Carax's signature tracking shot is cut short. Cinematographer Eric Gautier ("Wild Grass," "On the Road") dispenses with Jean-Yves Escoffier's color signals, instead composing more natural, lush shots (the film looks something like a fairy tale made by Douglas Sirk). If any of Carax comes through well here, it is in the music, here an experimental orchestra in an abandoned factory, its musicians producing eerie dischord as they gaze worshipfully upwards, towards their conductor. "Pola X" is beautiful to look at and listen to but it has a cold heart.

“Pola X” is a unique film in Carax’s sparse bibliography in that it is the only of his films that does not showcase his favorite actor, Denis Lavant. In this 1999 work, a young writer, Pierre (Guillaume Depardieu), is being watched by a strange, dark-haired girl named Isabelle (Yekaterina Golubeva). When he finally confronts her face to face, he learns her story: she tells him that she is the daughter of his father. This revelation puts Pierre’s life into a downward spiral. This is the only Carax film (again, I am not including “Tokyo!”) that has others credited for screenplay, not just himself. It is also the only film that is based on adapted material, the Herman Melville novel, Pierre, or, the Ambiguities. And, his favorite star, Dennis Lavant, is nowhere to be seen. As such, this is the least of the Leos Carax films Carax is a visual director and “Pola X” works best when he uses his locales and set design to excellent effect, like when Pierre crashes at his friend’s digs, an old factory that the musician owner uses to create his avant-garde and elaborately staged concert pieces. The problem I have with the film is that, at an hour and 20 minutes in, I realized I stopped caring for the main characters Pierre, Isabelle and Lucie and this is not a good thing.