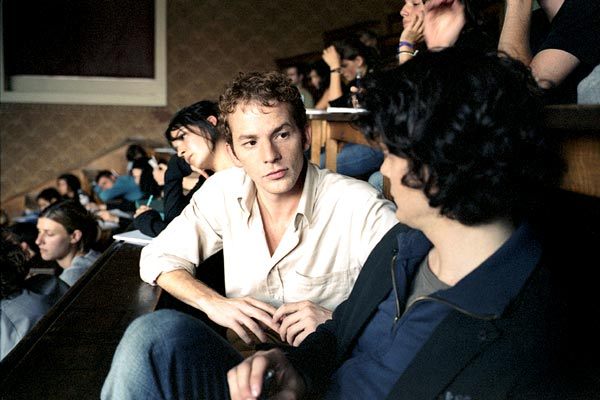 A college literature class brings together Alexander M, Eloi D, Edouard and Andre Morney, a showboating manipulator who will mentor and meddle with this group who become "Poison Friends."

This nasty little tale of impressionable youth being sculpted by the strongest force within their group has been told before, but cowriter (with Marcia Romano)/director Emmanuel Bourdieu has a nifty little trick up his sleeve that turns the moral on its head and makes reconsider the behavior of each character. Once the rug has been pulled out from under, though, Bourdieu loses much of his dramatic momentum, but at least recognizes this and wraps quickly while we're still pondering our own rush to judgement. Professor Mortier's (Jacques Bonnaffé, "Lemming," "The Page Turner") class provides our protagonists the proper background to define themselves. Alexandre (Alexandre Steiger) defends his late arrival with a valid excuse which is nonetheless trumped by the professor. Andre (Thibault Vinçon, "The Last Day"), the showboater, is the only to accept the Professor's opening day challenge and orates the justification of the art of writing. Eloi (Malik Zidi, "Almost Peaceful," "Changing Times"), even later than Alexandre, accepts his dressing down while Edouard (Thomas Blanchard, "The Pornographer") pretty much keeps to himself but comments upon the action. The lads crash a female student's party and Andre encourages Eloi to pursue Marguerite (Natacha Régnier, "How I Killed My Father"), but later, when Eloi slips a note in her mailbox, Andre insists he set the post on fire. He pushes Alexandre towards auditioning for a play and sits in the back making out with the girl he has marked for another. He colludes with Eloi's mom Florence (Dominique Blanc, "The Trilogy"), a famous author, to submit a play Eloi has written for publication without his knowledge, then chooses Ellroy as the writer Eloi must prepare his thesis on. Once he's set them on their courses he announces that Mortier is sending him to Berkeley to complete his senior thesis - envy all around. And yet earlier, we've witnesses Mortier rejecting his thesis over lunch. Just what is Morney playing at? He returns, his long curly locks shorn, but his modus operandi intact. Complaining about the American tolerance for non stop burger intake at their local cafe, he ensures Alice (Botum Dupuis), another girlfriend, does not join their group and infringe on his limited time with them. But Andre's absence has not been what he said it was and when the group discovers he has lied to them, their reaction is artfully public. This clever little film explodes conceptions and presents a good argument for the ends justifying the means. Thibault Vinçon is quite compelling as Morney, lulling us into judging him swiftly while Steiger and Zidi evolve more slowly. Dominique Blanc, resembling a Gallic Carolyn Jones, makes a strong impression as a privileged artist and Régnier is quite vulnerable as the worried Marguerite. As Edouard, Andy Gibb lookalike Blanchard is more bystander than participant. "Poison Friends" is a one trick flick, but it has a sinister edge that lures one into its twisted tale. It has a flavor not unlike Donna Tart's "Secret History," albeit nowhere near as dark.