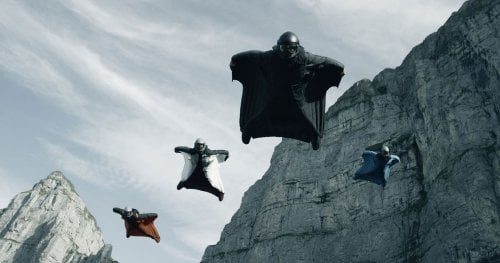 Legendary motocross driver Johnny Utah (Luke Bracey, "The November Man") leads the way for his best friend Jeff (Max Thieriot, TV's 'Bates Motel') across Swing Arm City's spines, but while Jeff successfully follows Utah's jump, he's unable to make the pinpoint stop. Shattered, Utah drops out of the sport, eventually joining the F.B.I.'s training program. Challenged by Instructor Hall (Delroy Lindo, "Malcolm X," "Domino") to prove his worth, Utah connects the dots among an outrageous diamond heist and two crimes in other countries, theorizing that the same gang is attempting to complete the Ozaki 8, a global Xtreme sport challenge tied to becoming one with Earth and nature in "Point Break."

Well, I've officially come full circle, as the original 1991 Keanu Reeves starrer was the first press screening I attended. I was dubious about that film and found myself pleasantly surprised. This time around though, while we're treated to incredible stunts accomplished by the likes of surfer Laird Hamilton, free climber Chris Sharma and an impressive team of wing fliers all beautifully shot by this film's director (Ericson Core, "Invincible"), the movie supporting these spectacles has a weak foundation in Kurt Wimmer's (2012's "Total Recall") dramatically uninvolving script. Stepping into surfer Bodhi's shoes as some kind of zen sports extremist Robin Hood, Édgar Ramírez, so good in "Joy," delivers its lines as if each is some kind of solemn pronouncement. Bracey is bland, his motivations for joining the F.B.I. nonsensical and his Utah (a name he rejects for his real one) is too easily invited into Bodhi's secret circle. One of the things that made Kathyrn Bigelow's film so much fun was the rebellious surfer mystique of Patrick Swayze's Bodhi clashing with the straight arrow former football quarterback F.B.I. newbie challenged to keep up with those he's attempting to infiltrate. Here, after Utah decides the thieves will next appear off the coast of France to surf a giant wave, he jumps in with the best of them. Sure, he might need to be saved, but one never really believes he's in any real danger (also, what's up with boats full of bikini wearing babes far out on what must be a frigid Atlantic Ocean?). And while Bodhi's team is supposed to be connecting with Mother Nature by 'freeing' its resources, Zimmer's script quickly gives way to standard robberies and shoot outs with death the only not-very-altruistic outcome. Bodhi's crew of Grommet (Matias Varela, Sweden's "Easy Money"), Roach (Clemens Schick, "Casino Royale") and Chowder (Tobias Santelmann, 2012's "Kon-Tiki," "Hercules") are interchangeable. The lone female member, Samsara (Teresa Palmer, "Wish You Were Here," "Warm Bodies"), is a spiritual spouting sexual conquest for Utah who causes no tension with Bodhi. The hedonism of the first film is represented here by Bodhi's billionaire backer Pascal Al Fariq (Nikolai Kinski, 2014's "Yves Saint Laurent"), an underwritten character who gives massive parties in uber chic retreats. In Gary Busey's Pappas role, Ray Winstone ("Edge of Darkness," "Noah") hangs around and grumbles. Core would have been better off showing off his skills in a documentary, because all his energies have gone into the astounding feats of big wave surfing, wingsuit flying, sheer-face snowboarding and the free rock climbing finale at Angel Falls which makes Tom Cruise's "Mission Impossible: 2" feat look tame. The global locales, from the Alps to Mexico's Cave of Swallows provide stunning backdrops for the action. But Core appears completely sapped when dealing with the all important connective tissue, that little thing known as the story. Grade: