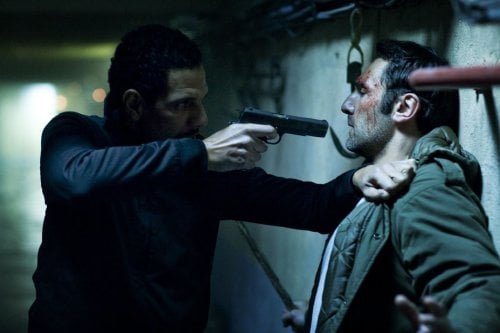 A wounded man runs, at a stagger, away from his armed pursuers. He tries to cross a busy roadway to escape but is struck down by a motorcycle. The man, Hugo Sartet (Roschdy Zem), is a notorious gang boss and ends up in the hospital under the care of nurse’s assistant, Samuel (Gilles Lellouche). The unsuspecting Samuel is about to have the worse day of his life in “Point Blank.”

When nursing student Samuel Pierret (Gilles Lellouche, "Mesrine: Killer Instinct") saves the life of a John Doe accident victim whose respirator was mysteriously cut, he's not only chewed out by the shift physician but comes to the attention of the criminal elements who wanted his patient dead. Sam's very pregnant wife Nadia (Elena Anaya, "Mesrine I & II," "Cairo Time") is kidnapped and he is told he must deliver the man to get his wife back in "Point Blank." Cowriter (with Guillaume Lemans)/director Fred Cavayé, whose similarly themed "Pour Elle" was remade as "The Next Three Days," can expect the same outcome for his latest, a breathlessly paced French thriller that doesn't let up from its opening frame to its satisfying coda. Cavayé startles us immediately, with Hugo Sartet (Roschdy Zem, "36th Precinct," "Le Petit Lieutenant") bursting through steel doors in a foot chase which ends in a tunnel when he's inadvertently mowed down by a motorcyclist. Hugo is a thief, who latest job left him with more knowledge than is healthy. Sam, of course, is in the dark, but gradually, as the two end up on the run, a grudging trust forms as the enemy lines ripple out to unexpected places. Once again, a regular guy goes rogue trying to save his wife, but this time, instead of elaborate plotting, the protagonist is flying by the seat of his pants, the unknown quantity not whether the wife is innocent of murder but who wants to see him and the man he saved dead. "Point Blank" also boasts a parallel policier, with female Commandant Fabre (Mireille Perrier) being challenged on her case from outside her district by the politically savvy Commandant Patrick Werner (Gérard Lanvin, "Mesrine: Public Enemy #1"). Fabre's protegee, Capitaine Anaïs Susini (Claire Perot), also figures prominently. Foot chases through the Paris subway system and jumps across buildings are accompanied by driving violins, but Cavayé doesn't always hit us over the head the way the remake inevitably will - witness the beautiful montage as Hugo consults with his homies, only to see them pop back up in an elaborate plot to paralyze police headquarters. Lellouche may be the film's 'hero,' but it's Zem who has the real character arc here, gaining sympathy as a cog in the wheel who suffers loss of his own as he tries to outlive his shelf life.

Sophomore feature filmmaker Fred Cavaye debuted with “Anything for Her,” a French thriller remade by Hollywood as “The Next Three Days.” His second time out the gate gives us another thriller that, though clichéd and derivative, is a roller coaster ride from start to finish. Samuel’s very pregnant wife, Nadia (Elena Anaya), is kidnapped by Sartet’s cronies and he has only three hours to get the criminal out of the hospital and into their hands – or Nadia dies. This seems like tough stuff that is full of angst, but Cavaye, with co-scribe Guillaume Lemans, somehow keeps it lighter and, often, funny in its irony. This is not a typical French crime thriller, though, and there is nary a car chase to be seen. But, chases there are and they are all on foot, running, running, running through the hospital, streets and subways of Paris. You know how things will turn out for our hero, Samuel, but that does not diminish the everyman hero story that “Point Blank” tells. The plot that turns Samuel’s world upside down is a twisted one indeed. There are good guys, bad guys, good cops and bad cops galore, the murder of a wealthy industrialist and Samuel on the run from them all. The amusing thing is that the good guys are really bad guys and the bad guys, personified by Sartet, are really good. This may seem confusing but Cavaye keeps it clear for the viewer and garners good sympathy for Samuel and Nadia. Acting is solid across the board and the techs are uniformly slick. With the relative success of “The Next Three Days,” “Point Blank” will be Americanized in the near future. Do not wait for that film, though, when you can see the entertaining original.