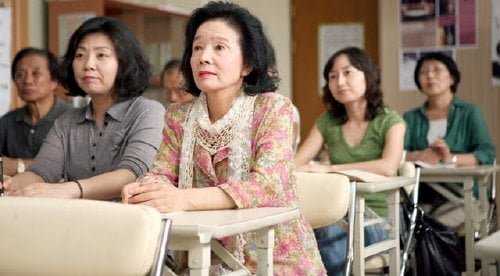 A young girl's body floats down a river. A sixty-six year old woman learns she is in the early stages of Alzheimer's and searches for something to give her last years meaning. The two will be tied together with a horrifying discovery, but they will also be bonded in "Poetry."

Writer/director Chang-dong Lee ("Oasis," "Secret Sunshine") who turned to filmmaking at the age of forty has created a perfect film. Korean star Yun Jung-hee, who disappeared from the screen at about the same time her director became a filmmaker, is perfection bringing Chang-dong's often unspoken subtext to this luminous tale. As Mija searches for poetic inspiration, "Poetry" filmgoers will revel in it. As Mija leaves the hospital where she's learned of her illness, she witnesses the unbearable breakdown of Hee-jin’s mother (Park Myung-shin), dazed by her daughter's suicide and the now empty ambulance which brought her here. Mija continues along to her job, where she cares for curmudgeonly stroke victim Mr. Kang (Kim Hi-ra). She's amused by the tip she's given - less than $10 - from the well known miser. The shop owner who keeps Kang's key laughs at this story, but turns her attention to customers as Mija relates the tragic tale of the schoolgirl's suicide. Mija, whose daughter lives and works in another city, cares for her grandson, Wook (Lee David), who pushes away her questions about the girl in his class in order to complain about the need for a new cell phone, something his grandmother cannot afford. She talks her way into a poetry class held at the culture center, where poet Kim Yong-tak (Kim Yong-taek) instructs his students that they should produce one poem by the wrap by looking at things as if they were entirely new. Back home Mija contemplates her dish basin, before holding out an apple. She's interrupted by Wook's admittance of his pack of five buddies, who march through the tiny apartment into his room. Wook is an insufferable brat. The next day, as she listens to trees, she receives a call from Ki-bum’s father (Ahn Nae-sang), asking to meet with her. She is surprised by a luncheon attended by all of the fathers of Wook's friends, where she learns of a horrible crime. Mija is suddenly distracted, though, and exits the restaurant to admire a flower growing outside the window. In her absence, the five men agree that the six of them need to come up with 30 million Won (about $27,000) as appeasement money. There are many parallels between "Poetry" and Korea's submission for last year's foreign language Oscar, "Mother," but "Poetry" is the more artful work. Chang-dong lets his audience intuit what Mija is thinking as she revisits the scene of Hee-jin's leap or consider the dichotomy of a woman who is losing her nouns try to find a new way to string them together, just as Mija's pride of appearance, which is often noted by others as chic, is at odds with her strained financial means. Mija goes to visit Ki-bum's father at his place of business and sings karaoke as she waits. He is astounded by the professionalism of her singing and she hints at a past, but we are left to conclude what that past entails. When Mija grants Kang's wish, one she initially rejected with outrage, there are more than one possible motivation. The film's conclusion, which uses ritual, play, one mystery illuminated and another begun, is thoroughly satisfying without spelling out a thing. The production is perfection. The film features moments of great beauty alongside some of the harsher aspects of life. It's often moving, sometimes funny, even suspenseful and Chang-dong never loses tonal control. This film marks the director as a major filmmaker, even given his limited filmography. Costume design, cinematography (Hyun Seok Kim) and sound (Seung-cheol Lee, "Old Boy") are all integral to Chang-dong's orchestrated vision and Yun Jung-hee is his muse. This is an outstanding work of art, one that should not be missed.