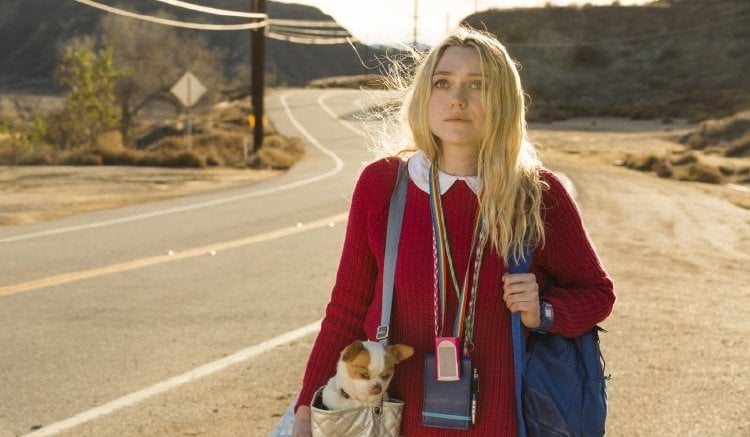 Wendy (Dakota Fanning) is an autistic young woman and dedicated Star Trek fan living in a group home supervised by Scottie (Toni Colette), who helps the challenged lady cope with the “normal” world. When Paramount Studios announce a Trek screenplay contest to all comers, Wendy, the consummate Trekie, pulls out all the stops to win in “Please Stand By.”

Autistic Wendy (Dakota Fanning) just wants to leave the group home her sister Audrey (Alice Eve, "Star Trek: Into Darkness"), overwhelmed by their mother's death and her own new baby Ruby, placed her in. Wendy's been making great strides with therapist Scottie (Toni Collette), but resents that their exercises take away time from writing the 'Star Trek' script she hopes will win her $100K. Audrey's first visit goes poorly, causing Wendy to miss the deadline for mailing her entry to Paramount. She decides to travel from San Francisco to L.A. to deliver it in person without the help of Scottie's calming phrase "Please Stand By." It's not difficult to see why this movie is bypassing a theatrical release, but that doesn't mean it's not worthwhile. This sweet little road movie is anchored by Fanning's central performance, one of compassion isolated by her affliction. Adapted from his one act play by Michael Golamco and directed by "The Sessions'" Ben Lewis, the film is slight but winning, just like Wendy's little dog Pete. Scottie's been having trouble raising her own teenaged son, Sam (River Alexander, "The Way Way Back"), but once she enters the group home she's in command. Wendy, prone to violent shutdowns when overwhelmed by noise or emotion, is generally taking care of herself, holding down a job at Cinnabon, obeying the rule to never cross Market St. on her own under any circumstance. Her talent is evident in her writing, a tale in which Spock travels through time to try and save Kirk. Wendy's convinced she can win and that the money will allow her to move back in with her sister. But when Audrey arrives, Wendy's first upset that she hasn't brought her new niece Rose, then by Audrey's non-committance. At dawn the next day, she sets off with her script, her iPod (Cinnabon coworker Nemo's (Tony Revolori, "The Grand Budapest Hotel") made her a mix CD) some cash and Pete, who's followed her and refuses to go home. She makes the momentous Market St. crossing and navigates her way onto an L.A. bound bus, but Pete's need to pee gets them thrown out on the side of the highway. Back at the home, Scottie is beside herself. After working the phones for 24 hours, she traces her charge to that highway stop and Audrey sets off to find her. Scottie and Sam follow when her detective work turns up a stronger lead, Sam's understanding of Wendy by reading her script an inroad to rebuilding his relationship with his mom. Wendy is both taken advantage of, losing all her money, and helped by strangers, senior retiree Rose's (Marla Gibbs, TV's 'The Jeffersons') aid a double edged sword. The resilience Wendy exhibits in achieving her goal is both remarkable and believable due to Fanning's committed performance. Her travels bring her into contact with many individuals, "Happy Death Day's" Jessica Rothe a sympathetic swindler, "Terri's" Jacob Wysocki an amusing male nurse, Robin Weigert (HBO's 'Deadwood') and Patton Oswalt a couple of L.A. cops, the latter of whom can speak fluent Klingon, a handy skill. Like the one act play which inspired it, "Please Stand By" is small in scale and holds few surprises, but it is a pleasurable pastime, its satisfying wrap sidestepping Hallmark sentimentality. Grade: