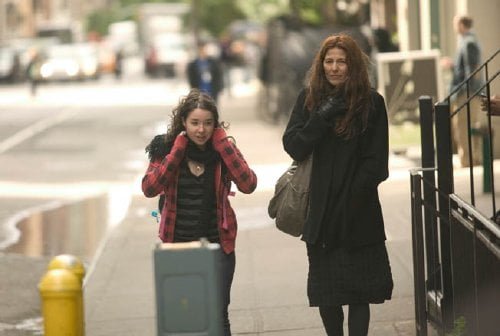 Kate (Holofcener perennial Catherine Keener) and her husband Alex (Oliver Platt, "2012") run a successful Manhattan business selling mid-century vintage furniture but Kate feels guilty about buying from the recently bereaved and making a profit on their things. She feels even worse about the Fifth Avenue apartment across the hall which they plan to expand into once its tenant, the outspoken ninety-something Andra (Ann Guilbert, "The Dick Van Dyke Show's" Minnie), passes on in writer/director Nicole Holofcener's "Please Give."

Holofcener's last film, "Friends with Money," was about economic inequality among girlfriends and the one prior to that, "Lovely & Amazing," was about female self esteem within a family. In her latest, Holofcener explores charity and acquisition within the characters of a mother and daughter and the two sisters they develop tricky relationships with. Rebecca (Rebecca Hall, "Vicky Cristina Barcelona") returns to the apartment she shares with older sister Mary (Amanda Peet, "2012") complaining about how their grandmother's neighbors always look at her with 'Is she dead yet?' hovering unspoken in the air. Kate is torn between her desire to expand and feeling horrible about what that will entail, while Alex seems perfectly comfortable with their decisions. In an effort to be a good person, Kate invites Andra and her granddaughters over for dinner on Andra's birthday. Mary, who makes no bones about disliking Andra, drinks too much and begins questioning her hosts on just how they plan to renovate, right in front of grandma. She also flirts with Alex. Meanwhile, Kate and Alex's daughter Abby (Sarah Steele, "Spanglish") is in a struggle with her mother who will not recognize her severe acne problem and who will not give her $200 for a pair of jeans when there are 44 homeless people on their street. Holofcener has tucked all kinds of goodies into perhaps her funniest script to date. Rebecca, the 'good' sister (and a radiologist - a profession which goes deep), is selfless caring for her grandmother, but she has no life to speak of. A client, Mrs. Portman (Lois Smith, "How to Make an American Quilt," "Minority Report"), attempts to fix her up with her grandson Eugene (Thomas Ian Nicholas, the "American Pie" trilogy). Rebecca suggests they take their respective grandmothers to 'see the leaves' and the trip finally allows her to do something for herself while also recognizing that her grandmother is rather rude and negative. Mary, the 'bad' sister (and a cosmetologist, only skin deep), does whatever she damn well pleases but is riddled with insecurity (she's been stalking her ex-boyfriend's new girlfriend). In the film's only questionable subplot, Mary and Alex begin an affair when he visits Skinology and requests a facial (Peet and Platt are far too unlikely a sexual coupling), but it allows Abby to eventually learn something that she can side with her mother on. Kate is constantly giving away money to people she doesn't know but fights with Abby all the time over what her daughter wants. She looks for volunteer opportunities but is no help - she cries at the plight of a Downs Syndrome teen who ironically comes to comfort her. When Alex challenges her on her guilt over how they make their living, she back pedals - if they didn't do it, someone else would. (And indeed, Kate is irate when another dealer buys a piece from her - which she sells at solid profit - and charges more in his own shop). She also doesn't recognize the 'service' they provide those who cannot be bothered to evaluate the possessions of their deceased. She is liberal white guilt personified, but Keener keeps her human. Holofcener has more tricks and puns up her sleeve. With the romantic notion of the deceased 'haunting' their furniture (Kate sees the former occupant of an ugly chair she's bought appear, later Andra dissolves out of hers), the director at once adds some ethereal spirituality and an earthbound connection between people and their possessions. Perceived value comes into play when Kate buys pieces out of guilt and an early object of unknown origin which looks fairly worthless, a brightly painted flowerpot, meets a comic end nonetheless weighted with meaning in how it comes to transpire. "Please Give" is classic Holofcener, a filmmaker who is able to get her audience thinking while never forgetting to entertain them.