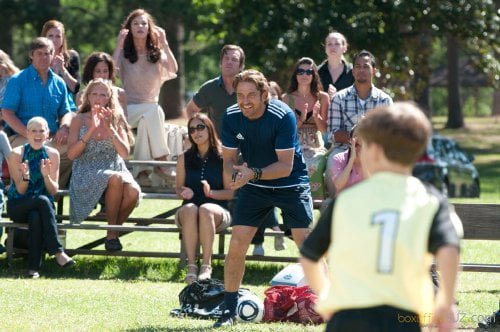 George Dyrer (Gerard Butler, "Chasing Mavericks") used to be a famous soccer star, but now he's reduced to angling for an ESPN sportscaster job. He's moved back to Virginia to establish a relationship with his young son Lewis (Noah Lomax) and ends up coaching his soccer team. This leads to a new kind of fame - bait for flirtatious soccer moms - all while George is trying to convince his ex-wife Stacie (Jessica Biel, "Hitchcock") that he's "Playing for Keeps."

About the best thing to be said for this movie, written by Robbie Fox ("So I Married an Axe Murderer") and directed by that Italian attempted jerker of tears Gabriele Muccino ("The Pursuit of Happyness," "Seven Pounds"), is that it doesn't costar Katherine Heigl. Instead we get an earnest performance from a wan looking Jessica Biel and women portrayed as needy stalkers, predatory man hunters and neurotic marrieds by Judy Greer ("The Descendants"), Catherine Zeta-Jones ("Rock of Ages") and Uma Thurman ("Kill Bill") in an utterly predictable story which offers not one laugh but leaves big plot devices in black holes. In addition to those voracious women, there's Carl (Dennis Quaid, "The Words," TV's 'Vegas'), faithless but jealous husband to Patty (Thurman), looking to sidle up to George's former celebrity. At the film's onset, as soon as George has been arm twisted into coaching the kids' team, Carl gives George an envelope stuffed with cash 'for the kids,' with hints that his son should goal tend and his daughter sing the anthem. Later, Carl gets arrested and calls George to bail him out to the tune of $10 grand, but George gets the money from Patty. George does dip into that envelope to pay off his landlord Param (Iqbal Theba, 'Glee's' principal), but it's never mentioned again. Someone forgot about that screenwriting rule that if one shows a gun, a gun must be fired. There's also a 'borrowed' Ferrari, lent by Carl to George, which makes almost no sense and a soccer game that the ever-late George misses with Lewis that's never mentioned again even though he's like, the coach. George goes back and forth, first sleeping with a couple of these women then backing off to win back Stacie, who's on the verge of marrying Matt (James Tupper, TV's 'Men in Trees'), a character who exists for no other reason than to stand around being cuckolded. Lewis gets close to his dad then hates him when he's ignored, then quickly falls back in. Butler isn't bad here so much as directed to run back and forth, both on the field and off. Apparently he hasn't gotten the message about his appeal in romantic comedies, especially as this is his second one starring as a newscaster. "Chasing Mavericks" went down in flames just a scant six weeks ago, and that was a better film than this. "Playing for Keeps" is simply DOA.