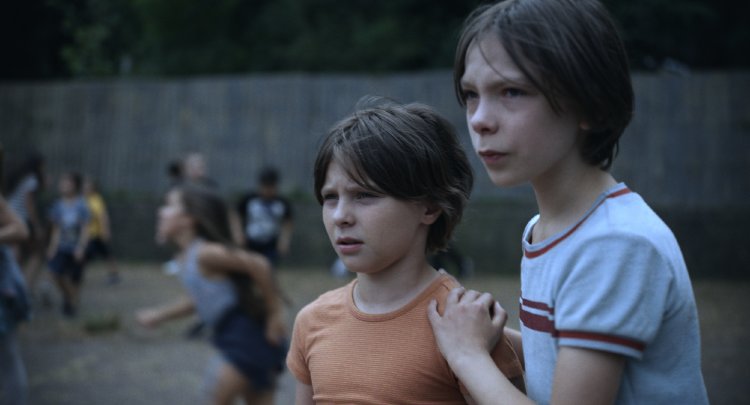 On her first day of school, 7-year-old Nora (Maya Vanderbeque) must almost be pried away from her dad (Karim Leklou, "A Prophet").  Throughout the morning, she barely speaks, then doesn’t eat her lunch when she is not allowed to sit with her older brother Abel (Günter Duret).  Things continue to go downhill when Abel refuses to play with her at recess as he’d promised because they’re ‘beating up the new kids.’  Then Nora witnesses something that turns her world upside down on the “Playground.”

Writer/director Laura Wandel’s debut feature is Belgium’s shortlisted submission for the International Feature Oscar.  The original French title, “Un Monde,” (A World), is more evocative of the film which illustrates how children are essentially isolated within their own environment.  Wandel and her cinematographer Frédéric Noirhomme keep their focus tightly on the schoolchildren, adults rarely seen above the waist, heard only as part of Nora’s ambient experience.  The effect is one of intense immersion.

The timid little girl begins to open up, socializing with Clémence (Lena Girard Voss) and Victoire (Elsa Laforge) and gaining confidence on the balance beam and in the pool.  But Abel’s defense of her on that first day in the playground has caused him to become the target of schoolyard bully Antoine (Simon Caudry) and when Nora tries to get adult attention, distracted teachers offer little help.  When the boy wets himself in the cafeteria, Nora begins to experience humiliation by association (something which also occurs when her father’s status as a stay at home parent is questioned).  Then she crosses Abel by telling their dad and, in trying to help, makes the situation worse.

In trying to navigate her first outside social situation, Nora finds herself in a quandary and begins to act out, that shy little girl we first met becoming almost unrecognizable.  Thankfully there is one teacher, Mme Agnès (Laura Verlinden, "The Brand New Testament"), who recognizes Nora’s anguish for what it is and lends a sympathetic ear, taking her plight seriously and treating her with respect.  ‘Sometimes we don’t know what to do,’ she admits when Nora asks why awful situations like Abel’s are allowed to continue.

Things escalate to an unbearable degree, Nora witnessing the new torture of Ismaël (Naël Ammama), her brother one of the worst perpetrators.  Nora’s cherubic, solemn face and tomboyish appearance house an old soul who has learned enough to recognize the cyclical nature of abuse.  Wandel has elicited a quiet yet profound performance from Vanderbeque while presenting an on-the-ground perspective on the subject of bullying.  “Playground” is a gripping and astute look at the hardships of navigating childhood.

Playdates, including virtual, for Film Movements “Playground” are listed here.