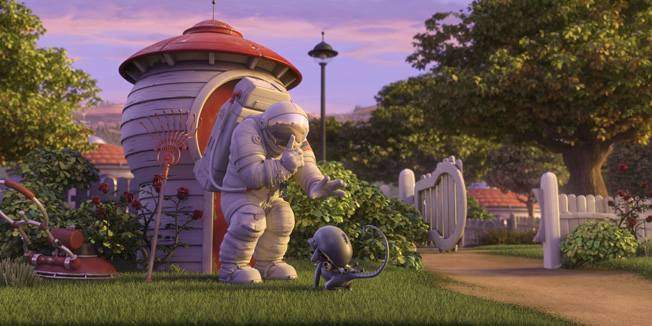 Lem (Justin Long) is the newly hired assistant astronomer at the local observatory. He learns the patter for his lectures, like the universe is 500 miles wide, but feels there is more to space than just space. His brethren’s greatest fear is invasion by aliens and it is about to be met in the guise of astronaut Captain Charles “Chuck” T Baker (Dwayne Johnson), newly come from Earth to “Planet 51.”

Things start off well enough as we are introduced to the inhabitants of the title planet. Small, green and ensconced in the 1950’s (with hovercraft instead of cars), these folk love a good sci-fi movie and believe that they will be invaded from beyond, some day, by hideous, monstrous alien creatures bent on enslaving them all and eating their brains. Their fears, it seems, are well founded when astronaut Chuck lands in the middle of town and declares he is the first living creature on the planet, until he notices that he is not alone. All around him are green humanoids who happen to speak English. Luckily, for Chuck, he comes into the care of Lem, a forward thinker who believes the pilot when he says that the universe is infinite and there are billions and trillions of stars. Lem gets the idea to introduce Chuck to the population via television. Good intentions turn bad, though, when the broadcast starts too early, while the astronaut is showing the TV crew how an alien monster would behave. The populace, proved correct, now knows what it is happening – ALIEN INVASION!!! - and the army, under the command of General Grawl (Gary Oldman), is mobilized, surrounding the NASA spaceship. Now, Lem and Chuck have two problems: how to evade capture and how to get back to the ship within the next 36 hours. If Chuck misses the deadline, the mother ship will automatically return to earth. The problem is there is a massive manhunt under way and Chuck’s landing craft is locked down tight by General Grawl. All this takes place in the first half or so. The rest of the movie is about how Chuck and Lem, with the help of Lem’s crush, Neera (Jessica Biel), who provides beauty as well as brains, overcome the two problems. The story is nothing new or original and calls attention to itself by trying to be clever. There is, of course, the “E.T.” in reverse spin on the story, but why do sci-fi animations of late have to keep referencing, directly and indirectly, every popular science fiction/monster movie made? This film by committee has three directors – Jorge Blanco, Javier Abad and Marco Martinez – that foregoes originality and attempts to dazzle with refs to “Close Encounters of the Third Kind,” “The Right Stuff” numerous times, “The Day the Earth Stood Still,” “Alien,” “Singing in the Rain” (!?), “Star Wars,” “Terminator”…. Need I go on? “Astro Boy” did it a whole lot better. The talented vocal cast includes Long, Johnson, Biel, Oldman, Seann William Scott, John Cleese (as the evil scientist, Professor Kipple) and everyone does well, but no one stands out, not even Cleese. Kudos to the kitschy art direction that really captures an otherworldly take on our 1950’s pop culture. The movie’s look overpowers the weak story and flat characters – this is no “Toy Story.” There is also the cliché robot-acting-like-a-puppy named “Rover” that, I have to admit, I took a liking to. “Planet 51” is a mildly entertaining, visually well-crafted animation that can wait for rental. I would go see it at a theater only if someone else bought the tickets. I love a really good animated movie and there have been a number of them this year. This is not one of them.