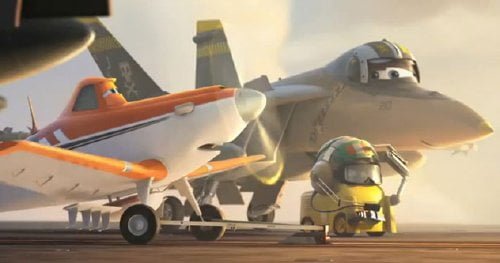 Dusty Crophopper (voice of Dane Cook) spends his days flying over the same fields but dreams of racing, even though his mechanic Dottie (voice of Teri Hatcher) tells him he's just not built for it. But Dusty manages to get the attention of retired F4U Corsair Skipper (voice of Stacy Keach), who agrees to train him after witnessing the little crop duster's combination of skill and pluck. Dusty misses out in tryouts by a mere tenth of a second, but when another racer drops out, he's off on a five leg around the world adventure in "Planes."

Although this one's labelled as 'The World of Cars,' "Planes is from DisneyToon Studios, not Pixar. But it's been universally acknowledged that "Cars" was the least of the Pixar offerings and "Planes" follows that film's blueprint with wings, a less cocky hero and fart jokes. The movie sputters to a start, has some nice moments in the middle and comes to a predictable conclusion, but at least it's better than "Cars 2." The movie starts with a tip of the hat to "Top Gun" with fighters Echo (voice of Anthony Edwards, "Top Gun's" Goose) and Bravo (voice of Val Kilmer, "Top Gun's" Iceman), before settling into Dusty's rural world. At first, the flightless Skipper stays taciturn in his hangar, but once he starts dispensing his wisdom, he learns something about his protege - Dusty's afraid of heights! Skipper gives him strategical advice, but sooner or later Dusty will have to face his fear. Dusty, who's renamed himself Strut Jetstream for the race, meets his competition, a bunch of global stereotypes like the British Bulldog (voice of John Cleese), Mexican wrestling-masked El Chupacabra (voice of Carlos Alazraqui) and alluring Indian Ishani (voice of Priyanka Chopra), but its fellow American three-time champion Ripslinger (voice of Roger Craig Smith), who considers him nothing more than a special interest story, who will be his biggest foe. The first leg of the journey is across the Atlantic and, sure enough, Dusty's natural propensity to fly low means he takes on more ice than the others, keeping him dead last. On the next leg, Dusty helps Bulldog, who's flying blind because of an oil leak, and Ripslinger's quick to remind him where nice guys finish. In India, Ishani, who has the little crop duster's motor revving, invites Dusty to see the Taj Mahal and along the way tells him that the Himalayas can be crossed by following railroad track. This turns out to be a ploy and when Dusty realizes it he shows his mettle and gains respect (the animators also use a whiteout for effective suspense). Despite that lovely Taj Mahal scene, the romance here is largely played for laughs as El Chupacabra pitches woo to French Canadian Ripslinger (voice of Roger Craig Smith). Skipper gets back into action when Dusty has trouble over the Pacific (treacherous waves beautifully animated) and is escorted to a U.S. aircraft carrier. When the little guy appears to be literally beaten, his parts beyond repair, that earlier act of kindness will be repaid, a nice lesson for kids (and some amusement for adults when Dusty finally relinquishes his spray boom drag, an appendage he didn't want to lose). And like the other animation with an unlikely racer, "Turbo," it all comes down to the finish line. But as written and directed by "Tinker Bell" video vets Jeffrey M. Howard and Klay Hall, there are few attempts to adapt this automated world for its residents. I'm not sure what the little automated things that take the place of Himalayan monks are even supposed to be or what the Statue of Liberty's been replaced with and a flock of white birds in that romantic Taj Mahal sequence that resemble mini-gliders are more confusing than not because of their anthropomorphic scarcity. A crop duster 'fart' might be fun for kids, but a climactic porto-potty joke goes a little too low. Vocal work is fine, but few of the actors are recognizable and Carlos Alazraqui could be homaging Antonio Banderas's Puss-in-Boots, so why the need for stars? The movie also features Brad Garrett as Chug the truck and ESPN sportscaster Brent Musburger as Brent Mustangburger. "Planes" is another OK outing in a disappointing year for animation. The 3D presentation is de rigueur these days for both animations and flying sequences, but the movie probably plays just as well without it.