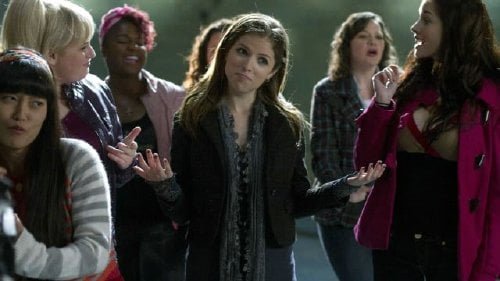 Beca (Anna Kendrick, "50/50," "End of Watch") just wants to go to L.A. and get a job in music production, but her dad Dr. Mitchell (John Benjamin Hickey, SHOtime's 'The Big C') convinces her to try one year at his own Barden University. The previous year its Bellas became the first all female a cappella group to make it to the championships only to be humiliated when lead Aubrey (Anna Camp, "The Help") projectile vomited mid-song. Although she initially rejects the idea of joining, Chloe (Brittany Snow, 2007's "Hairspray," TV's 'Harry's Law') makes a passionate pitch in the showers and Beca uses her musical mash-up talents to help the group become "Pitch Perfect."

Oh what 'Glee' has wrought. After enduring "Joyful Noise's choral competitions earlier this year, we get to go to regionals once again with the International Championship of Collegiate A Cappella (ICCAs). This time around, though, despite an overstuffed story, there's some fun to be had with A Cappella slams, quirky humor and some good performances. Who knew the Oscar nominated Kendrick could sing? Producers Elizabeth Banks (hilarious in a small role) and Max Handelman culled their creative talent from television and Broadway and although debuting feature director Jason Moore (TV's 'Dawson's Creek,' Broadways 'Avenue Q') navigates a number of tonal shifts, he hasn't reined in all the rambling loose ends of Kay Cannon's (TV's '30 Rock') adaptation of the Mickey Rapkin book. And two of the major players come to us questionably pre-formed. Beca's disdain for college seems to rest solely on her distaste for her father's new wife (who is seen conflict-free later in the film) and Aubrey is so resistant to change and such a martinet leading the Bellas we're left to wonder why no one ever challenges her authority. Instead we get the old saw about the perky clean cut girl suspecting the edgier one (although, in truth, Kendrick's Beca is hardly intimidating), then finally making a truce by trusting Beca's ideas. Having lost all their former members, Aubrey and Chloe are desperate and so form a new group based on the formula trope of bringing together a band of misfits. Fat Amy (Rebel Wilson, "Bridesmaids," "Bachelorette") is a fearless, filterless outsized talent from New Zealand. Stacie (Alexis Knapp, "Project X") is a stacked sex maniac. Cynthia Rose (Ester Dean), the group's only black member, may be a lesbian and Lilly (Hana Mae Lee) is comically inaudible. There are a few other members who act more as filler, their characters given no wacky quirks. The Bellas are taunted by Bumper (the Jack Black-ish Adam DeVine, TV's 'Workaholics'), the confident lead of the all male, championship Treblemakers (Aubrey has laid down the law that sleeping with the enemy means immediate expulsion), but Jesse (Skylar Astin, "Hamlet 2") is immediately smitten with Beca and woos her throughout the film. His roommate, amateur magician Benji (Ben Platt), longs to be a Treblemaker and gets a shot in the last act, one of many extraneous subplots. Beca's roommate, however, is the hilariously hostile Kimmy Jin (Jinhee Joung), and although she has no plot particulars she's a welcome addition. The film's really all over the place and for every good bit, like a mid-movie Riff-off that's like an A Cappella poetry slam, there is underserved excess, like Beca's attempts to get the college radio station manager to play one of her mixes. There's a rather revolting homage to 'Glee's' slushie-ing that makes little sense in the context of what follows and a crisis involving Chloe's vocal nodes flatlines. That shower bit between her and Beca is plenty weird, though, in a good way, as is Wilson's performance. The Treblemakers are fun to watch, particularly in their show stopping rendition of 'Right Round.' Musical selections on the film's soundtrack are as all over the map as the film itself. I had no idea why Christopher Mintz-Plasse was in this film, but Elizabeth Banks and "Best in Show's" John Michael Higgins are simply great as extremely un-PC ICCA commentators. "Pitch Perfect" certainly isn't, but there are true notes in its messy karaoke mix to keep it entertaining and is star, Kendrick, is turning out to have quite the range.