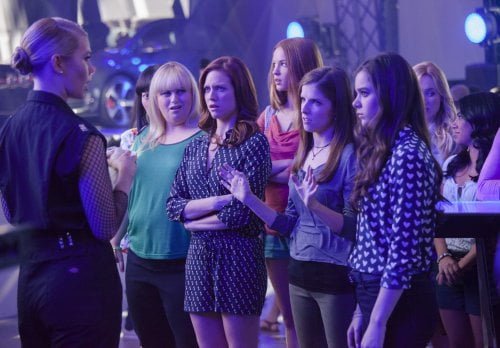 Since we last saw them, the Barden Bellas have taken the world by storm, but when Fat Amy (Rebel Wilson) has a wardrobe malfunction of epic proportions during a Kennedy Center performance for President Obama's birthday, the group is humiliated by global media and suspended from auditioning new members, performing or competing - unless they manage to beat Germany's Das Sound Machine at the World Competition in Copenhagen in "Pitch Perfect 2."

Elizabeth Banks, who produced the first film, makes her feature length directorial debut in this sequel that delivers plenty of rousing A Cappella numbers but little else. Returning screenwriter Kay Cannon leans uncomfortably on stereotypes, the unfortunate past of her new Mexican Bella Flo (Chrissie Fit) making for cringe-worthy 'comedy,' while attempts to inject raunchy humor fall with a thud. "True Grit's" Hailee Steinfeld acquits herself well enough as the Freshman Legacy Bella who gets into the group on a technicality, but as the newbie in a group of departing Seniors doesn't shine enough to hang the future of the franchise on. Returning MVP Wilson's fearless brand of comic acting provides most of the film's few laughs, but it is 'Key & Peele's' Keegan-Michael Key as Beca's new boss at Residual Heat Recording Studio who is the most consistently amusing character here. Props too to Snoop Dogg for an endearing cameo and Green Bay Packer players exhibiting good sportsmanship. Like most sequels, "Pitch Perfect 2" is essentially a retread of the first writ larger. We trade Aubrey's vomiting for Fat Amy's split breaches, Beca's (Anna Kendrick) stint at college radio for a studio internship and the now friendly Treblemakers' animosity for Das Sound Machine's disses from their Kommissar (Birgitte Hjort Sørensen). A campus Riff-Off morphs into one organized by 'A Cappella's biggest fan' (David Cross, TV's 'Arrest Development') while Beca and Jesse's (Skylar Astin) romance takes a back seat to Bumper's (Adam DeVine) wooing of Amy and Benji's (Ben Platt) play for new girl Emily (Steinfeld). Banks returns with bigger hair as Gail while John Michael Higgins' John focuses his untoward comments on misogyny. The film's set-up is nonsensical, an obvious mishap branded intentional attention-grabbing. Banks's direction is fine for this sort of thing, an awkward scene transition here or uninspired establishing shot there forgiven in light of the dynamic musical numbers, the bar only set too low for Das Sound Machine's subpar performance when it really counts. A mid-section camping retreat lead by Anna Camp's Aubrey for the Bellas to 'refind their sound' is by-the-numbers, its 'bear trap' gag telegraphed, but a prime opportunity for a "Cups" reprisal. "Pitch Perfect 2" isn't as good as the cute but problematic first film, but if the response of a promotional audience is any evidence, its fans will sing its praises nonetheless. Still, this is the second female-driven comedy this year that proves women can be as tone deaf as men. Grade: