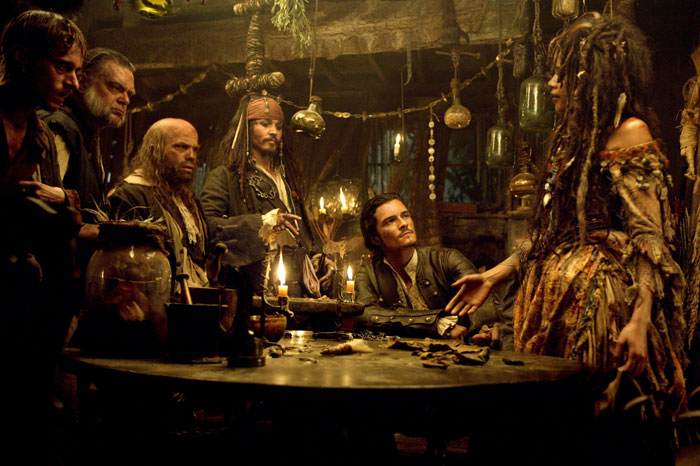 On the day of their wedding, the East India Trading Company's Cutler Beckett (Tom Hollander, "Pride and Prejudice") arrives with orders for the arrests of both Will Turner (Orlando Bloom, "Kingdom of Heaven," "Elizabethtown") and Elizabeth Swann (Keira Knightley, "Pride and Prejudice") for aiding and abetting the known pirate, Captain Jack Sparrow (Johnny Depp, "Finding Neverland"). In another part of the world, Jack has his own set of problems, most notably a blood debt to Davy Jones (Bill Nighy, "The Hitchhiker's Guide to the Galaxy," HBO's "The Girl in the Cafe") which he can only avert by finding "Pirates of the Caribbean: Dead Man's Chest."

Remember the unexpected delight of finding a summer popcorn movie named after a theme park ride that turned out to be something special because of a deliciously whacked performance by Johnny Depp and some nicely directed action sequences? Well, this is the movie we probably had been expecting. The gild is off the lily, the bloom is off the rose - "Dead Man's Chest" is a bloated, tedious 150 minutes. Even Depp seems to have lost his spark, trotting out old tricks to diminished effect. The best that can be said for this trilogy middler is that its waterlogged bad guys are an altogether better bunch of special effects than their ghostly predecessors. Writers Ted Elliott and Terry Rossio had a couple of good ideas here. They've amped up the love triangle quotient by introducing a thread about Elizabeth finding her inner pirate, and hence a kind of revulsed attraction to Sparrow which Will cannot help but take note of. Then they add a twist to that by reintroducing her original fiance, Norrington (Jack Davenport), in highly original fashion. Ostensibly on the same side, Sparrow, Turner and Norrington spend as much time swashing each other's buckles as they do teaming up against the supernatural crew of Davy Jones's Flying Dutchman and his hideous sea beastie, the kraken. But the film is so overstuffed, with subplots about Will trying to save his dad, Bootstrap Bill (Stellan Skarsgård, "Exorcist: The Beginning"), cannibals worshipping Sparrow, Governor Swann's (Jonathan Pryce, "The Brothers Grimm," "The New World") political clout and the exploits of Pintel (Lee Arenberg) and Ragetti (Mackenzie Crook, BBC's "The Office," "The Brothers Grimm"), that the strength of the good bits is diluted. And they couldn't figure out how to reincorporate the poor jail house dog, so instead they left the poor mutt out to dry. Blame director Gore Verbinski, who seems to think he's making some kind of epic rather than what should have been a quickly paced comic romp. Yes, the film is beautiful to look at and individual set pieces (Sparrow turned into a fruit kabob, a race to reboard the Pearl, a couple of three-way sword fights) work in and of themselves, but "Dead Man's Chest" is a real watch checker of a movie, an exhausting viewing experience. For all that's been said about the amazing CGI work, particularly on the octopus head and eyes of Davy Jones, I couldn't help think that some of his crew looked like "Lord of the Rings" Orcs, filler creations with no specific characteristics. There is an impressive hammerhead shark sailor, but a hermit crab headed one's body has no correlation to its topper. An old sailor who has turned into reef and become embedded in the Dutchman's hull springs unexpectedly and impressively to life and there should have been more moments like the barnacle that suddenly blooms like a zit on Bootstrap's cheek. The kraken itself is simply more tentacles. More impressive is the effect of a seaworthy vessel being grabbed from below and crumpled like a piece of paper. The cast has some fine new additions, with Nighy's Scottish burr giving Jones more character and less menace than one would expect. I really enjoyed Naomie Harris ("28 Days Later...," "Tristam Shandy: A Cock and Bull Story") as Tia Dalma, a voodoo priestess, but she's ably assisted by some very interesting makeup. Oddly, it's the makeup that hinders Skarsgård's performance. He's supposed to be transforming into his eventual sea creature self, but he spends the first half of the film looking like a guy with a prosthetic starfish slapped over one eye. The returning leads are comfortable in their characters, with Knightley sporting a suitably tomboyish pluck. Using makeup again (really, this film's makeup should be remembered come Oscar time), Depp's timing with eyeballs painted on his cheeks and eyelids provides some visual fun, but he only coaxed one real chuckle out of me through the film's entire running time. He needs to find something new to reinvigorate Sparrow's schtick. On the other hand, Davenport just about steals every scene he's in. "Pirates of the Caribbean: Dead Man's Chest" is obviously a quality production and the series has attracted a lot of talent, but Verbinski needs to lean out and apply some razor sharp focus to finish his series with a much needed bang.