Pirate Radio (aka “The Boat That Rocked”) 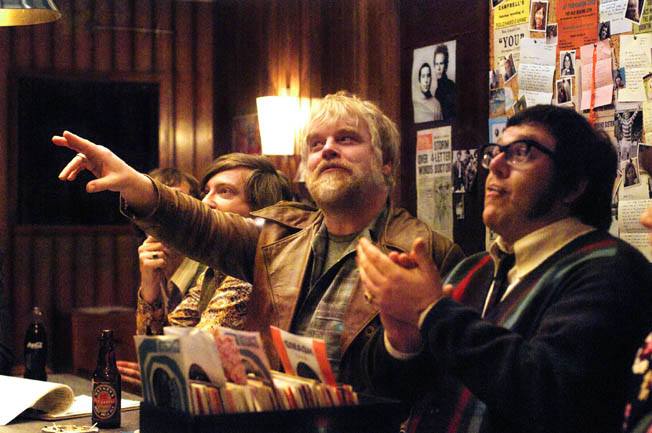 After being expelled from school, Carl (Tom Sturridge, "Being Julia") is sent by his mom to a most unusual person and place to shape up - shipping out with his godfather, who captains the boat which plays rock 'n roll 24 hours a day off the coast of England courtesy of a cast of colorful DJs. Carl doesn't know he has landed during a golden age, as British Minister Dormandy (Kenneth Branagh, HBO's "Warm Springs," "Valkyrie") believes the station is corrupting morals and is determined to shut down "Pirate Radio."

Writer/director Richard Curtis ("Love Actually") has had a bumpy ride with his latest, which was released in Britain as "The Boat That Rocked" at a considerably longer running time. And perhaps, despite an ending that seems to go on forever, that's what it needed, as the U.S. theatrical version never really gels. It's extremely episodic, and while the individual episodes are often a lot of fun (this is one of those movies where the cast seem to be really enjoying themselves, in an infectious way), one walks away with little but classic rock earworms. Curtis does inject his film with a love for the music that presumably was the soundtrack of his youth. Back in the day (mid-60's) the BBC was notorious for their stodgy programming, so while Britain was producing some of the great rock music, its youth couldn't hear it on the radio. Radio Caroline filled in that gap, as did other pirates off the coast. Curtis's fictitious version is a joyous place, even if women, lesbian cook Felicity (Katherine Parkinson, "Easy Virtue") excepted, are only allowed on board every other week. Carl's godfather Captain Quentin (Bill Nighy, "Hot Fuzz," "Valkyrie") is a youthful hedonist, challenged by his lead DJ, an American known as The Count (Philip Seymour Hoffman, "Capote") who itches to be the first to say the F word on the air. The Count's a bit put out when former star DJ Gavin (Rhys Ifans, "Danny Deckchair," "Hannibal Rising") returns to steal some thunder, but, like a lot of things in this movie, the rivalry is largely undeveloped. The most gregarious DJ is Dr. Dave (Nick Frost, "Shaun of the Dead," "Hot Fuzz"), who makes a show of trying to get Carl laid only to steal his potential girlfriend, Quentin's niece Marianne (Talulah Riley, "St. Trinian's"), when Carl goes to borrow a condom, confusingly contradictory behavior. The sweetest DJ is breakfast guy Simon (Chris O'Dowd), whose marriage to American bird Elenore (January Jones, TV's "Mad Men") turns out to be a cruel sham and we never learn why Angus (Rhys Darby, HBO's "Flight of the Conchords," "Yes Man") thinks nobody likes him. Then there are the mysterious DJs. 'Midnight' Mark, DJ (Tom Wisdom, "The Sisterhood of the Traveling Pants 2") is considered the sexiest but rarely speaks, even on the air while Bob 'the Dawn Treader' (Ralph Brown, "Exorcist: The Beginning"), who works the 3-6 a.m. shift, is on the boat for months before the others know he's there. I never figured out what 'Thick' Kevin's (Tom Brooke, "Venus") radio role was other than to be Carl's roommate, and, well, thick. Day to day hijinks are interrupted at Christmas by a visit from Carl's mom Charlotte (Emma Thompson, "An Education"), famous for her sexual escapades, who finally tells her astonished son who his dad is. Occasionally, such as during this holiday, we are transplanted to terra firma to keep up with Dormandy and his flunky Twatt's (Jack Davenport, the "Pirates of the Caribbean" trilogy, TV's late, lamented "Swingtown") evil plotting. Christmas dinner at Dormandy's is the hilarious opposite of Rock Radio's. We also are occasionally treated to montages of Rock Radio's audience, mostly teenaged girls. The cast does a lot to keep this ship from sinking, and it should be noted that even actors in smaller roles such as Will Adamsdale's ("Stoned") newsreader John and especially Francesca Longrigg's Mrs. Dormandy add a lot of flavor. Still Sturridge is more an audience POV than an interesting character. Curtis was onto something with the subject matter he chose for this film, but instead of an in depth look at an interesting piece of history we get a collage. When the ship does eventually go down, it goes down literally and it feels like Curtis thinks he's making "Titantic II." The soundtrack includes The Kinks, The Beach Boys, Jimi Hendrix, The Who and The Moody Blues, but notably, no Beatles.