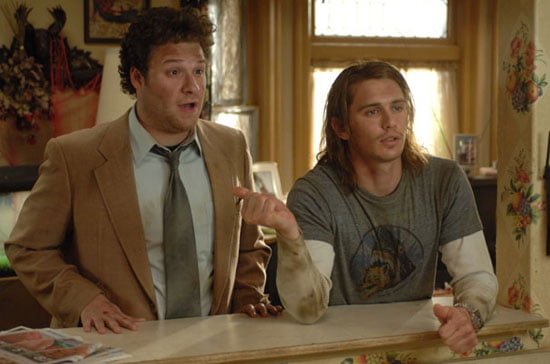 Twenty-five year-old Dale Denton (Seth Rogen, TV's "Freaks and Geeks," "Knocked Up") spends his days donning costumes to serve subpoenas, visiting his girlfriend Angie (Amber Heard, "Alpha Dog," "All the Boys Love Mandy Lane") at her high school and smoking up to ten doobies a day. He's favored by his dealer, the perpetually stoned Saul Silver (James Franco, TV's "Freaks and Geeks," "Spider-Man 3"), who gives him exclusive access to the world's rarest weed. That same night, Dale's ready to stick documents to Ted Jones (Gary Cole, "A Simple Plan," "Office Space") when he sees Ted and a female cop (Rosie Perez, "Fearless," "The Take") kill someone. He drops his joint and bolts, but Ted's the drug lord who supplies Saul and one toke of that smoldering joint identifies the witness as a customer of "Pineapple Express."

The Judd Apatow comic express continues to chug with some new twists - "Pineapple Express" marks the producer's first action film and first collaboration with director David Gordon Green ("George Washington," "Snow Angels"), known more for his independent art films than stoner comedies. The story, by Apatow and "Superbad" screenwriters Seth Rogen and Evan Goldberg, is also a new twist on an old genre, and it's a rare, laugh-out-loud throughout comedy. James Franco's Saul Silver can step into the pantheon of iconic movie stoners joining Sean Penn's Jeff Spicoli and Jeff Bridges's Dude. In a black and white 1937 set prologue, General Brat (James Remar, "Blade: Trinity," HBO's "Sex and the City") is running an experiment on 'Item 9' in an underground bunker. In a sealed off room, Private Miller (Bill Hader, "Superbad") has been smoking pot for nine hours and 'feels like a pat of butter melting on a stack of pancakes.' His answers to military questions escalate in their rebelliousness (and silliness!), until the camera closes in on Brat's face as he declares Item 9 'Illegal!' That segues us into the present and into Dale's crappy old car as he goes about a typical day. From delivery man to doctor, he tags his prey with 'You've been served,' but he's a bit less successful weaseling out of meeting Angie's parents at dinner the next night, primarily because he feels like a fat, underachieving loser in front of her male school buddies. Later, when Dale realizes he's been spied by the murderous drug lord and his pocketed cop, he speeds back to Saul's place and spreads his panic theorizing they'll be traced by Saul's meritorious marijuana. They grab essentials (weed and munchies) and split, ending up in a forest with a dead battery. Before Saul becomes convinced the corrupt cop can 'triangulate' them through their cell phones, he reaches his middleman, Red (Danny McBride, "The Foot Fist Way," "Drillbit Taylor"), and arranges to meet him and cap off the story there, but Red's already being held by Jones's thugs Budlofsky (Kevin Corrigan, "Superbad") and Matheson (Craig Robinson, "Walk Hard: The Dewey Cox Story," TV's "The Office") and sets them up. Within 48 hours, the boys will have set off a drug war between Jones and his rival Asian gang, driven Dale's girlfriend's family from their home, engaged in a high speed chase, had a falling out and become bfff's (yes, that third f is per Saul). Rogen and Franco are a great comic duo, with Rogen's ever so slight edge of something resembling responsible adulthood making him the panicky straight guy to Franco's sweet natured stoner with a childlike sense of wonder. Danny McBride, their third wheel in a tricycle kind of sense, does a great job of playing the Judas then wriggling back into their (and our) good graces. A lot of what makes this trio, and the film itself, work is the absurdist tossaways woven throughout the dialogue and the visual characterizations sprinkled about their abodes. For example, when Dale and Saul meet up with Red, he's icing a cake for his dead cat. Franco makes eating a pickle hilarious, if for no other reason than the way the jar has been placed on a car's trunk. Production designer Chris Spellman ("Superbad") ensures every environment is telling. Watch when Saul leaves his living room for a moment. The camera follows him but does not enter the room, yet if one looks in one will find a weird electric train setup with teepees. Red's apartment is another piece of work with his bachelor bar and a retro bathroom featuring heavy porcelain pieces which will inflict great damage upon him. The film does feature a great amount of violence and it's not the cartoon variety even when it can be uncomfortably funny. Our heros get their heads smashed, hit by cars and shot. Dale is faced by trying to reattach a body part and Red suffers so much blood loss he thinks he's high. The R rating is also earned by a prodigious amount of profanity. Supporting players all stack up as well without grabbing the spotlight away from the stars. Gary Cole is a touch dim as the menacing drug lord while Perez is tough as nails. They're reflected in their goons, Corrigan doing a spacey riff in just wanted to be home in time for dinner while Robinson means business, keeping a straight face through some great Rogen/Franco antics. Amber Heard is perfect as the ripe teenager well suited to her immature twentysomething boyfriend and Ed Begley Jr. and Nora Dunn are fun as her parents. Bill Hader's performance in the film's prologue is a great piece of skit comedy. "Pineapple Express" is the most raucous, absurd, violent and consistently funny entry of the Apatow brand of sweet, loser guys make good comedies. It makes Cheech and Chong look like relics.

Pierrepoint” is a beautifully crafted period piece of a subject that has had little study in films – capital punishment through the eye of the executioner. Albert, despite the toll the job took on his father who drank himself to an early grave, thinks that he can juggle his death-giving job and a normal life outside the prisons. He meets and marries Anne (Juliet Stevenson) but keeps his job a secret, even to her. He goes through the paces of his gruesome job with both efficiency and compassion as he sends his “clients” off to a better world. “They’re innocent, now,” he exclaims after he pulls the lever that sends the prisoners to his death. Albert’s efficiency at his job earns him the status of premier hangman in Britain. This fame, though, has its price, when he loses his anonymity to celebrity. He plies his trade through the 1930s and into the war years of the ‘40s, which brings him to the attention of Field Marshal Bernard Montgomery as the war ends and the Nuremburg trials begin. Monty wants Albert to take on the task of executing convicted Nazis and Pierrepoint sees it as an enormous opportunity. He does not know, however, that the job will have him killing at a rate he could never imagine before. On his first day on the job in Germany, he is required to execute no fewer than 13 war criminals. The numbers increase, over the ensuing weeks, to staggering proportions, causing Pierrepoint to question the morality of his deadly acts. When he must execute a good friend, Tish (Eddie Marsan), it is the straw that broke the camel’s back. The real turning point for Pierrepoint comes after the war when the death penalty is closely scrutinized by the public’s eye. “Capital punishment…achieved nothing but revenge,” Albert is to say later. This sentiment runs rampant throughout post war Britain and Albert, once a hero, is now considered a monster. Pierrepoint suffers from the same angst, multiplied, that drove his father to the bottle. Timothy Spall gives a tour de force performance in his portrayal of Albert Pierrepoint. Albert is imbued with compassion for his wards as he strives to make their suffering in the end as brief as possible. However, he is also obsessed (the sin of pride) with breaking his father’s 12-second execution record, eventually doing a hanging in a remarkable 7-seconds. His obsession for efficiency eventually overtakes his desire for compassion. With over 600 executions over a 22-year period, the grueling pace through the years exacts its toll on the man. Spall’s is a performance that will be remembered come year’s end for its subtlety and nuance. Juliet Stevenson also gives a powerful performance as Albert’s wife, Anne. She does not want to know about his job and is happy to live a life of comfort and ignorance. When she talks him into buying a pub, she capitalizes on his fame even though this is tearing him apart. Like Spall, hers is a performance that deserves note. The rest of the supporting cast, especially Eddie Marsden as the pathetic Tish, is solid all around. Helmer Adrian Shergold and company do a fine job in telling Albert’s story and give “Pierrepoint” the look and feel of the time and place. Each execution, though always with the same outcome, is uniquely handled and never feels routine. His execution of Ruth Ellis, the last woman executed in England, is done with gut-wrenching emotion. Production, from the gallows to life in pre- and post-war Britain, is expertly handled with a realistic look. Pierrepoint” is not an easy film to watch. Its subject matter is one of formal barbarism as lives are snuffed with clinical efficiency by the title character. It is a scathing indictment against capital punishment and anyone who feels that such legalized murder is right and just needs to see it. There is a great deal of food for thought in a film that personalizes the effects of the death penalty on both the executed and the executioner.