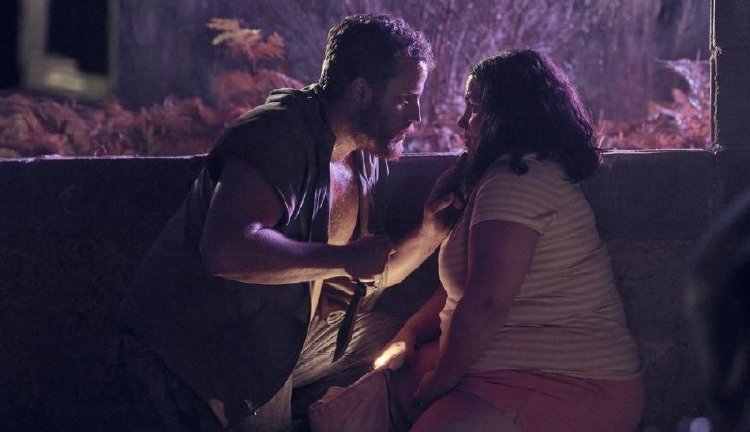 In the remote town of Villanueva del la Vera in Extremadura, a region known for its ham, 16 year-old Sara (Laura Galán, "The Man Who Killed Don Quixote") is expected to work in the family butcher shop after school, compounding the overweight teen's bullying by the peers who call her "Piggy."

Adapting her own 2018 short for her feature debut, writer/director Carlota Pereda doesn’t quite achieve the blunt force impact of the first work yet finds intriguing ideas for her and Galán to expand upon.   The feature begins exactly the same way as the short did while also expanding Sara’s family background, then finds redemption for the passive revenge which ended the 2018 film on such a shocking note.

Sara’s parents (Carmen Machi, HBO's '30 Coins' and Julián Valcárcel) welcome Sara’s ‘friend’ Claudia (Irene Ferreiro), a neighbor, when she comes in to pick up an order, but Sara can see it is a ruse to take a picture of the family behind the counter, one which quickly appears on social media titled ‘Three Little Pigs.’  After enduring mean girl leader Maca’s (Claudia Salas, Netflix's 'Elite') stuck out tongue and her mother’s continual nagging, Sara slips away to go to the local pool, timing her visit carefully to be left in peace.

On a very hot day (Pereda notes they were filming in temps up to 123 degrees!) and thinking she is alone, Sara disrobes to reveal herself in a flesh-baring pink bikini, but when she steps into the water, a strange man (Richard Holmes) pops up from beneath the surface.  Making matters worse, Maca, Claudia and Roci (Camille Aguilar) all arrive and begin taunting Sara about her ‘boyfriend’ and tormenting her with a pool net before noting her backpack at the side of the pool and leaving with all her clothes.  Sobbing and covering herself with her hands, Sara begins trudging back down the road in the blistering sun (her resultant angry sunburn more evident in the prior film), only to be accosted by a car full of jeering guys.  Attempting to get away, she turns down a dirt road where the same white van that was at the swimming pool sits idling.  What Sara sees there and what Sara fails to do sets up the remainder of the film as Sara denies she was at the pool and tries to recover the phone that was stolen with her backpack.

Pereda mixes many genres, her genius concept in having a bullied, ostracized teen ‘seen’ and treated sympathetically by a serial killer (Holmes) a twist on the coming-of-age trope of naïve young girl falling for the wrong guy.  The filmmaker’s expansion allows Sara to confront her parents on their collusion in her misery while also discovering that one of her tormentor’s handsome boyfriends, Pedro (José Pastor), is more simpatico than she’d imagined.   But Sara also must contend with a young policeman convinced that she is lying (it doesn’t help when she vomits on the pool’s crime scene after learning she swam with a corpse), Claudia’s accusatory mother Elena (Pilar Castro, "Julieta") and the town’s two priests.  These additional complications add layers to the film’s moral probing while adding suspense, the padding that hampers so many short to feature adaptations kept mostly at bay until the film’s overly extended slaughterhouse climax.

The filmmaker wisely returns to the same locations, the ancient town of narrow, winding streets overwhelmed by multi-story dwellings adding flavor, its pool resembling an ancient Roman bath.  Director of photography Rita Noriega shoots in a 1.33:1 aspect ratio, adding to the town’s claustrophobic vibe while focusing on figures.  Galán makes us feel the pain of a young girl bullied for an appearance her family and their business is complicit in, her accomplishments all the more extraordinary when we learn the actress playing the 16 year-old is 35.

“Piggy” is a horror film which derives terror from the inhumanity inherent in bullying while offering a brutal serial killer who recognizes the pain in a fellow human being.