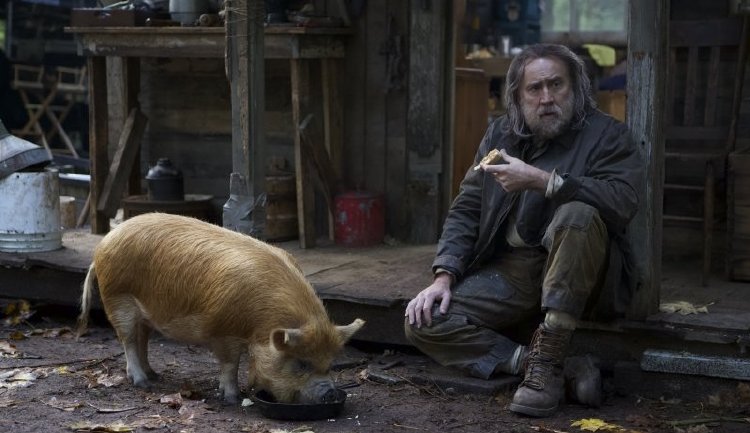 Rob (Nicolas Cage) lives off the grid with few modern amenities in the woods outside of Portland, Oregon, supporting his needs with the truffles picked up every Thursday by his dealer Amir (Alex Wolff).  We will learn that he once led a very different life in the city when he has to confront his past after two drug addicts burst into his home, knock him unconscious and steal his beloved “Pig.”

Writer/director Michael Sarnoski’s feature debut is a strange yet moving rumination on memory and grief.  He’s set it within a peculiarly punishing culinary world, one whose shadowy underground is a stark contrast to both its public sheen and the natural world that is Rob’s retreat.  The film’s tone is set not only by cinematographer Patrick Scola’s somber palette, but by Sarnoski’s gloomy soundtrack choices from Saint Saens to Roseblood.

Divided into three chapters, the first, ‘Rustic Mushroom Tart,’ establishes Rob’s life with Pig, who receives praise for finding a choice truffle and shares Rob’s cabin.   We are intrigued watching Rob construct that tart before a visit from Amir, who suggests Rob invest in a camp shower and phone (that shower suggestion will hang over almost the entire film, Cage wearing his upcoming beating like a bloody accusation until the film’s penultimate scene).   Awakening from the terrified squealing of the night before, Rob, looking like a wild man of the woods, tries to whistle.  In the next scene, he enters a diner, asking if Marge is there only to be informed she’s been dead for 10 years.

With Amir as his driver, Rob soon tracks down the tweakers who stole Pig, but they can only tell him they were paid by a rich man in the city, a man whose identity Rob immediately appears to know.  Rob informs Amir they’re heading to The Hotel Portland, puzzling the younger man who’s never heard of it.  Turns out it’s the basement of an establishment torn down years ago and replaced with a park where Rob finds Edgar (Darius Pierce), a man who appears to be running some kind of underground fight club for restaurant workers and who tells Rob that he ‘doesn’t even exist anymore.’  This is where we learn Rob’s full name and former identity.  And, as it turns out, one of Amir’s most joyful childhood memories involves Rob as well, although Amir will only learn this now.

But although we learn a lot about Rob, Sarnoski’s climax at the home of Darius (Adam Arkin) is still cloaked in mystery, albeit one involving multiple men’s grief.  The film’s middle chapter involves two meals, one cooked by Amir, another by Finway (David Knell), a hot Portland chef about to learn a major life lesson from a man from his past, but it is here, in the last chapter, where Rob’s Proustian meal reveals emotional truths if not quite all the answers we seek.  Cage’s soulful performance is incredibly moving, the actor communicating much with silence yet also finding depth of meaning in Sarnoski’s words.   If you go into this movie expecting something like “John Wick” crossed with “Gunda,” prepare to have your expectations upended as “Pig” is a melancholy, almost spiritual, meditation on what makes life worth living.