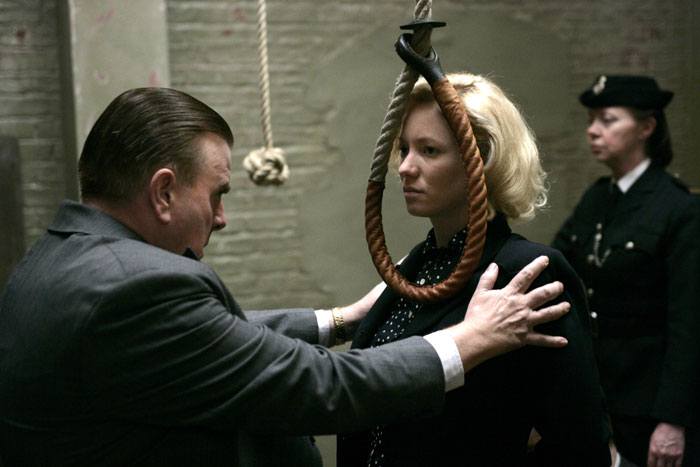 In 1934, Albert Pierrepoint joined the family business.” Like his father and uncle before him, he accepts the job of executioner for the British government and quickly rises through the ranks to become, anonymously, the best of the best at meting out legal death. His talent, though, garners Albert unexpected celebrity and, eventually, loathing across the land as “Pierrepoint – the Last Hangman.”

Following in his father and uncle's footsteps, Albert (Timothy Spall, "All or Nothing," "Lemony Snicket's A Series of Unfortunate Events") began working in the pre-war year of 1933 and become a hero, then a villain as the tide of public opinion changed. Before he finally resigned in 1955, he crossed paths with some of Britain's most notorious murderers and many of Nazi Germany's worst war criminals as "Pierrepoint: The Last Hangman." It is most unusual to view history through the eyes of an executioner, especially when Timothy Spall's tremendous performance reflects it back on his character's soul. "Pierrepoint: The Last Hangman" succeeds on many levels from the terrific acting from Spall and his "Nicholas Nickleby" costar Juliet Stevenson as Annie Pierrepoint to the rich period production which recalls Mike Leigh's "Vera Drake." If there is a fault to television director Adrian Shergold's first theatrical feature, it is that none of Pierrepoint's clients ever appear to struggle or protest (with the one exception of Timothy Evans, innocently accused of murders committed by serial killer John Christie), something which does not ring true when they number over 600. Much like Mr. Death, the titular subject of the Errol Morris documentary, Pierrepoint seems obsessed with efficiency in his job, proud of the quick and clean kill. His fastidiousness is noted and when the British have German war criminals to execute, they send Albert to Berlin. Here is a turning point, both for Albert and our perception of him. He is thrown when he realizes he is to execute thirteen people a day, but takes little interest in their crimes. These include such notorious Nazis as the "Butcher of Belsen," Dr. Death of Auschwitz and the perverse, bullwhip carrying Irma Grese, but Pierrepoint simply handles the women one by one, and the men in pairs, his efficiency in doling death an eerie counterpoint to the gassing of the Jews. When they run out of coffins and are told to lay the dead end to end, Albert refuses because 'they have paid for their sins' and 'should be treated with dignity.' His own dignity is offended when he returns to his modest home to discover reporters on his doorstep. Annie seems quite pleased by his notoriety, at least initially, as she believes she can use it for their new direction as pub owners. 'Plenty of people will want to buy a drink from the man who hung the butcher of Belsen,' she reasons (and she's right, turning a double profit reselling the congratulatory drinks he's bought). Oddly, this newfound source of income does not make Albert quit his day job causing him to come up against the most horrific day of his life when he learns it is a friend, Tish (Eddie Marsan, "Vera Drake"), whose crime of passion will put him in Albert's noose. This sets up a bravura scene between Spall and Stevenson in their closed pub, as affecting and as well acted as the moment Emma Thompson discovers it is a romance novel Anthony Hopkins has been reading in "The Remains of the Day." Drunk, Albert asks Annie if she knows what he's done today. She, noting his distress, tries to evade the subject and discuss her shrewdness in turning guilt for profit with behind the bar chocolate sales to departing husbands having to appease wives at home. When he persists, she shuts him out, both verbally and physically. It's a powerful pairing of work by two terrific actors. By 1955, though, the widely protested Ruth Ellis execution (her story was featured in the 1985 film "Dance with a Stranger") again has Albert in the news, this time branded a murderer, and, once again, it is the cold and calculating Annie who plots his next move. Pierrepoint's hurt, bruised bewilderment at film's end would apparently haunt the rest of his life, lived in a country that now outlawed the death penalty. Guilt, a proper response to government sanctioned execution, is a theme woven throughout Shergold's film.

Pierrepoint” is a beautifully crafted period piece of a subject that has had little study in films – capital punishment through the eye of the executioner. Albert, despite the toll the job took on his father who drank himself to an early grave, thinks that he can juggle his death-giving job and a normal life outside the prisons. He meets and marries Anne (Juliet Stevenson) but keeps his job a secret, even to her. He goes through the paces of his gruesome job with both efficiency and compassion as he sends his “clients” off to a better world. “They’re innocent, now,” he exclaims after he pulls the lever that sends the prisoners to his death. Albert’s efficiency at his job earns him the status of premier hangman in Britain. This fame, though, has its price, when he loses his anonymity to celebrity. He plies his trade through the 1930s and into the war years of the ‘40s, which brings him to the attention of Field Marshal Bernard Montgomery as the war ends and the Nuremburg trials begin. Monty wants Albert to take on the task of executing convicted Nazis and Pierrepoint sees it as an enormous opportunity. He does not know, however, that the job will have him killing at a rate he could never imagine before. On his first day on the job in Germany, he is required to execute no fewer than 13 war criminals. The numbers increase, over the ensuing weeks, to staggering proportions, causing Pierrepoint to question the morality of his deadly acts. When he must execute a good friend, Tish (Eddie Marsan), it is the straw that broke the camel’s back. The real turning point for Pierrepoint comes after the war when the death penalty is closely scrutinized by the public’s eye. “Capital punishment…achieved nothing but revenge,” Albert is to say later. This sentiment runs rampant throughout post war Britain and Albert, once a hero, is now considered a monster. Pierrepoint suffers from the same angst, multiplied, that drove his father to the bottle. Timothy Spall gives a tour de force performance in his portrayal of Albert Pierrepoint. Albert is imbued with compassion for his wards as he strives to make their suffering in the end as brief as possible. However, he is also obsessed (the sin of pride) with breaking his father’s 12-second execution record, eventually doing a hanging in a remarkable 7-seconds. His obsession for efficiency eventually overtakes his desire for compassion. With over 600 executions over a 22-year period, the grueling pace through the years exacts its toll on the man. Spall’s is a performance that will be remembered come year’s end for its subtlety and nuance. Juliet Stevenson also gives a powerful performance as Albert’s wife, Anne. She does not want to know about his job and is happy to live a life of comfort and ignorance. When she talks him into buying a pub, she capitalizes on his fame even though this is tearing him apart. Like Spall, hers is a performance that deserves note. The rest of the supporting cast, especially Eddie Marsden as the pathetic Tish, is solid all around. Helmer Adrian Shergold and company do a fine job in telling Albert’s story and give “Pierrepoint” the look and feel of the time and place. Each execution, though always with the same outcome, is uniquely handled and never feels routine. His execution of Ruth Ellis, the last woman executed in England, is done with gut-wrenching emotion. Production, from the gallows to life in pre- and post-war Britain, is expertly handled with a realistic look. Pierrepoint” is not an easy film to watch. Its subject matter is one of formal barbarism as lives are snuffed with clinical efficiency by the title character. It is a scathing indictment against capital punishment and anyone who feels that such legalized murder is right and just needs to see it. There is a great deal of food for thought in a film that personalizes the effects of the death penalty on both the executed and the executioner.