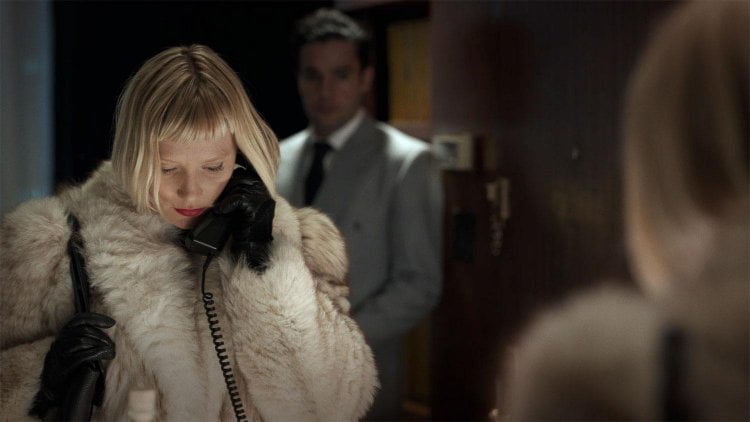 A man (Christopher Abbot) stands over a baby. He holds an ice pick just millimeters from the tiny body when his sleeping wife mutters, “What are you doing?” He turns quickly, hiding the pick behind his back and says, “Nothing.” This begins the very strange story of “Piercing.”

After Reed (Christopher Abbott) stops himself from stabbing his infant daughter with an ice pick, he suits up and tells wife Mona (Laia Costa) he's off on a 'business trip.' Once checked into his hotel room, Reed begins an elaborate pantomime of murder and its aftermath, logging every action into a timetable. He then calls a service, stating that he's ready for the girl he ordered for the next day now, accepting a substitute for the one he'd chosen for "Piercing." "The Eyes of My Mother" writer/director Nicolas Pesce neatly sidesteps the sophomore slump with an adaptation of Ryu Murakami’s novel featuring retro stylings and deliciously synched performances from leads Abbott and Wasikowska. What begins as a sick and twisted, vicariously consulted upon, ice pick murder twists into a psychological power play and sick and twisted love story. Abbott's thoughtful, internal performance is brilliantly matched with Wasikowska's confident brio, the two actors firmly grounding Pesce's high wire act. When Jackie (Mia Wasikowska) gets the call, her dishevelment is in stark contrast to Reed's meticulousness, the call girl briefly freshening up before heading out the door. Pushing past Reed into his hotel room, Jackie's demand for a drink is but the first sign that things will not go according to his plans. Announcing that she intends to take a shower, Reed frets as he looks at his watch, his calls to her unanswered. When he finally enters the steam filled room, he finds Jackie stabbing herself in the thigh with a pair of scissors. Horrified, he wraps up her leg and announces that they must get to a hospital. And so the man who would stab the prostitute with an ice pick before carving up and disposing of her body has now become her savior. Or has he? Pesce keeps peeling back revelatory layers with some nightmare inducing flashbacks and wittily absurd situations involving instant soup and Halcion. There's a dab of "American Psycho" in materialistic details. Double entendre pillow talk entwines those eternal partners, sex and death. Pesce's economical production, designed by Alan Lampert, has been creatively enhanced with an urban metropolis that alternately suggests 2D models and eternal CGI. Opening credits and split screens provide a retro 70's vibe. Inspired soundtrack selections include themes from Dario Argento's "Profondo Rosso" and "Tenebrae." "Piercing" may leave us with some questions at its end, but it is a jolting and compelling ride that drops us off with a laugh. Grade:

I went into sophomore writer/director Nicolas Pesce’s “Piercing” with almost zero prep, like who wrote the source material. The answer to that is Japanese novelist Ryu Murakami whose story, adapted by Pesce, is, to me, weirdly interesting and I mean that in a good way. The premise that I got from the beginning of the film is that the man, Reed, has murderous intent toward his baby and he and his wife, Mona (Laia Costa), come up with a plan to subdue that intent. Reed will check into an anonymous hotel, contact an escort service and arrange for a prostitute to come to his room. When he arrives, he performs an elaborate and detailed mime (with sound effects) on how he will perform the heinous crime and get rid of the body. Then, Jackie (Mia Wasikowska), from the escort service, arrives. It does not take too long before Reed’s best laid plans are ruined and the evening does not go nearly as planned. I will leave it at that as saying more would ruin the twists and turns of a twisty and turny story. I will say that the tiny cast does a solid job in creating distinct and interesting characters. It is up to the viewer to figure out their motivations. For me, I went along for the ride and enjoyed it!