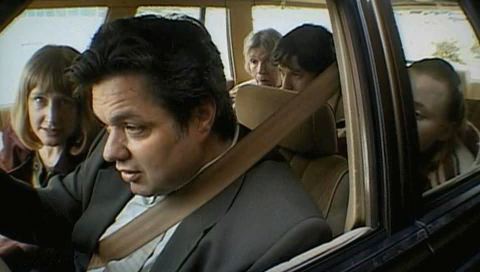 A controlling mother (Patricia Clarkson, "Far From Heaven") wields a powerful weapon - cancer - over a family stumbling over themselves to be her best caretaker while her eldest daughter, black sheep April (Katie Holmes, "Wonder Boys"), attempts her first Thanksgiving dinner. As the fussing, feuding family makes the long trip from upstate to April's New York City apartment, April herself learns the true meaning of Thanksgiving when a broken oven forces her to rely on the strangers in neighboring apartments in writer/director Peter Hedges' (writer, "About a Boy") "Pieces of April."

Dysfunctional families are de rigeur for Thanksgiving films and "Pieces of April" delivers. This caustic look at the Burns family ranges from flinchingly funny to downright creepy while April's adventures in her own apartment building run the gamut from sweet to sinister. Two distant clocks announce 7:01 a.m. April's new boyfriend Bobby (Derek Luke, "Antoine Fisher") puts the heavy sleeper into the shower fully dressed before the duo begin showing their ineptness in the kitchen (a turkey stuffed with a whole onion and celery stalks). Meanwhile dad Jim (Oliver Platt, "Lake Placid) wakens to panic when he doesn't find his wife at his side. After rude reactions for startling teenage children Beth (Alison Pill) and Tim (John Gallagher, Jr.), the threesome all become frantic until mom is found fully dressed, already waiting like an accusation in the family car. Supportive Bobby leaves on a mysterious mission, already out of earshot when April discovers their oven doesn't work. After getting nowhere with the building super, April knocks on the door of 2B and finds a militant middle aged black woman, Evette (Lillias White, "Interview with the Assassin"), who scoffs at the idea of a young white woman having a problem. Minutes later, April's story has her in tears and Evette begins a turkey relay while her husband Eugene (Isiah Whitlock Jr., "25th Hour") offers up serious cuisine tips. When April's allotted time is up with the oven in 2B she has a run in with a vegan in 4A, then the truly demented Wayne (Sean Hayes, TV's "Will and Grace," in full Crispin Glover mode) in 5D who takes her bird hostage over an imagined slight before settling in with a delightful Asian family. Meanwhile the ironically named Joy regurgitates a past with April in which she cannot find a single good memory while spearing 'perfect' daughter Beth with sharp words and conniving in an unhealthy relationship with son Tim. 'Why am I so hard on you? Because we had good times' (this is the script's sole explanation for her softening towards April later, presumably because they had none.) 'Who are you?' asks Joy's mother Dottie (Alice Drummond, "The Love Letter"), her question coming from more than her dementia. Jim desperately tries to keep the peace, April's only defender. Hedges never makes the true nature of Joy and April's past clear. Joy's bad recollections are bolstered by sister Beth, but that could be a case of sibling rivalry from the overtly competitive sister. Tim's obsession with photographing every family moment (shades of "Capturing the Friedmans") culminates in a truly creepy sequence where it is revealed that he took shots of mom before and after a mastectomy. Hedges puts Jim in the long suffering wife role. Yet while his family politics are a bit murky, Hedges does a wonderful job delivering a holiday message without becoming cloying. Holmes, her history only hinted at by her goth punk look, plays April tentatively, fitting for a girl trying on new relationships while taking a stab at mending a fractious one. She conveys the hurt inflicted by her mother in a nicely played scene with Luke, when his gift of turkey salt and pepper shakers bring back a painful memory. Luke is wonderfully sweet, a too good to be true partner who is nonetheless believable. That this thoroughly lovable young man loves April makes her mother and sister's recollections suspect. Clarkson drips bitterness like venom, only showing vulnerability when alone, rejecting the tiring solicitations of her family. Pill is terrific as the annoyingly perfect Beth. The smile which freezes upon her face when her mom belittles her is sickeningly accurate. Adding a true note of total lunacy is Hayes, whose obsessively dweebish behavior barely conceals something more disturbing. It's unclear what he expects from April - undying gratitude or sexual favors - for the use of his designer appliance. White and Whitlock inject much needed familial warmth along with that working oven. While the inevitable mother/daughter reunion that takes place at the film's conclusion is slightly earned, the dark comedy and perfectly structured intercutting that keeps the two stories moving forward leading up to it make "Pieces of April" a holiday classic for the art house crowd.

April Burns (Katie Holmes) and her mother, Joy (Patricia Clarkson), have been on the outs with each other almost since the girl was born. It’s Thanksgiving and grown up April thinks it is time to bury the hatchet and invites her estranged family for the holiday dinner. Not known to be much of a cook she vows to herself and her new live-in boyfriend Bobby (Derek Luke) to do all of the meal preparation herself. He heads out, on the special day, because he has to do a “thing” as she starts cooking dinner. But, the oven is broken, Bobby is gone and she has guests coming over in a few short hours. Hopefully, she won’t have to pickup the “Pieces of April.” Christmas films, rather than Thanksgiving flicks, tend to dominate the holiday movie going season. There are a couple of exceptions that come to mind: the brilliant and heart-rending comedy, “Plains, Trains and Automobiles,” and the horrible disaster, “Home for the Holidays,” Jody Foster’s failed sophomore effort. While “Pieces of April” does not approach the caliber of “Planes,” it is far more entertaining than “Home.” April, alone, new to the building and with disaster looming, decides to seek assistance from her neighbors. She tries the door of a series of unhelpful neighbors: a fanatical psycho cat owner; an equally fanatical psycho vegan; and, a black couple who’s initial reaction to her plight is derision and some hostility. April, desperate, blurts out her dilemma and tells Yvette and Eugene about her long time problems with her mother, Joy’s battle with cancer and April’s hope that she can make amends. Yvette, feeling a twang of compassion and understanding, invites her to the use of their oven, at least for a couple of hours before they have to start their own turkey dinner. Now that the crisis is under control April heads off to finish preparing the rest of the dinner and seek out another oven. She happens upon another neighbor, Wayne (Sean Hayes), a fastidious dog owner who grudgingly lets April use his pristine, new deluxe convection oven. When she pushes off his amorous advances he leaves in a snit and holds her turkey hostage. Now, she has to contend with dinner held prisoner and still needs to finish cooking the bird. Meanwhile, Joy agrees to attend the dinner at her husband, Jim’s (Oliver Platt), insistence and against the advice of her younger, eager to please daughter, Beth (Allison Pill), who is overly protective of her mom. The chemotherapy has taken its toll on Joy and Jim has to pull over frequently when she feels ill. A stop at a Krispy Kreme Donuts shop gives her temporary solace but, as they get closer to their final destination and likely confrontation, Joy has second thoughts. The story shift back and forth between these two scenarios as April works hard and makes more new friends: an Asian family that speaks little English but, still, understand that she is in trouble and offer their own unoccupied oven. The young woman learns a few things over the course of the day and realizes that her good intentions to make peace with her mom are worth the effort. Joy, also, learns a lesson in life as she vacillates between maternal obligation and fear of further confrontation with her daughter versus the fear of being alienated forever. “Pieces of April” doesn’t cover new ground and the long time conflict between mother and daughter is all wrapped up perfunctorily and in a tidy package by the end of the film. The two stars, Holmes and Clarkson, play apart for nearly the entire film and each is fully in charge of their piece. Supporting cast has some standouts with Oliver Platt giving a sympathetic performance as the father who wants harmony in his family and puts on a brave front over Joy’s illness. Derek Luke, though not in the film too much, makes the most out of his likable boyfriend Bobby, especially when you learn about his “thing.” Sean Hayes steals the show during his few minutes on screen as Wayne. Techs are OK with the apartments in April’s building each having a personality befitting its tenants. “Pieces of April” too easily wraps up the lifelong conflict between Joy and April in the end, but there is a good-natured feel that makes it a amiable little holiday film.