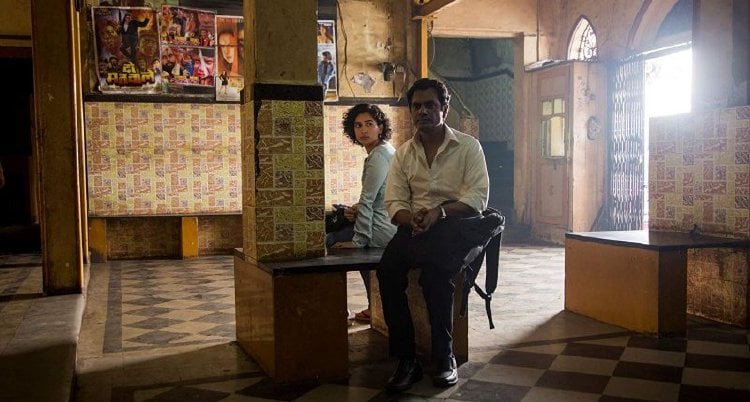 Rafi (Nawazuddin Siddiqui) is a struggling street photographer in Mumbai who is under great pressure from his Dadi (Brinda Trivedi) to get married. A chance photo he takes of pretty stranger, Miloni (Sanya Malhotra), ends up in a letter to his grandma who, of course, wants to meet her future granddaughter-in-law from the “Photograph.”

Cowriter (with Emeara Kamble)/director Ritesh Batra is unlikely to find the same sized audience that greeted his crowd pleasing “The Lunchbox” with his latest, but that is not to say “Photograph” does not have its own unique charms. Poor Mumbai tourist photographer Rafi’s (Nawazuddin Siddiqui) spiel about capturing a moment before it vanishes engages accounting student Miloni (Sanya Malhotra) while her distracted failure to pay for her photo sets her indelibly in his mind. They are both drifting through life, Rafi resisting his village grandmother’s entreaties to marry, Miloni carrying out her parents’ wishes with no idea of her own. Rafi sends Miloni’s picture to his Dadi (Farrukh Jaffar) inventing a false narrative to assuage her worries, but when she informs him she is coming for a visit, he finds Miloni and asks her to masquerade as his fiancée. But their time together stirs real emotions, Miloni becoming fond of Dadi and open to a way of life she has never experienced. There is a sadness to these two characters that permeates the film and its gentle romance. Batra’s film is odd, haunted by the ghost of both a spurned lover and a cola which is no longer manufactured. Miloni’s experience with Rafi and his grandma cause her to reconsider the family maid, Rampyaari (Geetanjali Kulkarni), who becomes a confidante to this strange girl who confides little. Miloni is too much a cipher to make “Photograph’s” romance fully engage, but Batra’s study of his country’s class divide glories in life’s little pleasures. Grade:

Director and co-writer Ritesh Batra, who brought us the charming little romance, “The Lunch Box (2013),” stays in the genre and in Mumbai with another romance, but one more firmly based in family and friends. The point of the story is not just about a budding romance, though it is that, but also about a young man’s attempt to pretend to honor his promise to his grandmother that he marry and give her a grandchild. The story begins when Rafi takes Miloni’s photo and, before he can give it to her, she is called away by her demanding mother. At the same time, Rafi gets word through his many friends that his Dadi has refused to take her medicine because he is not yet married. (The repeated admonitions from Rafi’s friends about his granny and his single status continue through the film and are very funny.) Hastily, he writes her a letter and encloses Noomie’s (his pretend name for Miloni) photo. Of course, the innocent and simple plan to distract Dadi turns out to be far more complex for Rafi as he must enlist Miloni in his deception. You can guess what will happen – or, at least, what you hope happens. Nawazuddin Siddiqui is quite charming as the eager to please Rafi who, you can see, is smitten with Miloni. Sanya Malhotra, as the object of Rafi’s and Dadi’s attention, shows little depth character, making Miloni more a blank cipher than a real person. Dadi, on the other hand, is quite the character and a joy to watch as she manipulates her beloved grandson.