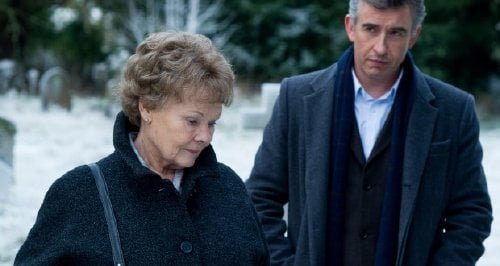 Martin Sixsmith (Steve Coogan, "The Trip") has just lost his job as Tony Blair's Director of Communications for something he never said when he's approached by a catering waitress at a cocktail party who's overheard him talking about perhaps returning to journalism. Jane (Anna Maxwell Martin, "Becoming Jane") tells Martin about her mother's travails trying to trace the son she was forced to give up for adoption by the nuns at Tipperary's Roscrea Abbey fifty years earlier. He's condescending, but when an editor suggests a human interest story, Martin agrees to meet "Philomena."

Director Stephen Frears' ("The Queen") latest is a step up from his last few middling efforts largely due to a touching yet funny and clear-eyed performance from Judi Dench as shamed unwed mother Philomena Lee. Star Steve Coogan (various Alan Partridge series and movies) and Jeff Pope ("Pierrepoint: The Last Hangman") have adapted Sixmith's book 'The Lost Child of Philomena Lee' as an odd couple road movie with flashbacks recalling Peter Mullen's 2002 Venice Film Festival winner "The Magdalene Sisters." Sixsmith is an intellectual clearly unused to socializing with Irish 'lace curtain' working class. The filmmakers play this for comedy, although Coogan and Dench's relationship gradually deepens as her motherly rebukes to his social rudeness hit home and his outrage at the injustice done by the Catholic Church against her grows. As Philomena tells her tale, we see her as a young girl (a fine Sophie Kennedy Clark soon to be seen in Lars von Trier's "Nymphomaniac!") in servitude as a Roscrea laundress for four years because of her misfortune. The old woman recalls the wondrous night when she met a young man at a fair and, having never been schooled in the facts of life, got pregnant. Now she toils for the promise of one hour with her young son Anthony a week. She is devastated to see him being taken away with Mary, the young daughter of her best friend, by a well to do American couple. All she has left is a photo taken and slipped to her by the kindly Sister Annunciata. When Sixsmith joins her on one of her trips back to Roscrea, where new abbess Sister Claire (Cathy Belton) has told her all records were 'lost in the big fire,' he's quick to point out the irony that they still have her signed consent not to look for her child. A contact tells him rich Americans paid to adopt Irish babies, and the duo set off for D.c. where Sixsmith quickly ascertains that Anthony became Michael Hess (Sean Mahon, "Higher Ground"), a closeted gay member of the Reagan administration. But their search will continue to a most surprising end. Dench's Philomena is the type who will regale Sixsmith with the entire plot of 'The Slipper and the Horseshoe' and suggest "Big Momma's House" on hotel pay-per-view over a visit to the Lincoln Memorial. While he begins to take this stuff in stride, he's baffled by her continued faith in her Church. We are not, however, because Dench completely slips into the skin of this simple woman whose moral code is strong yet refreshingly liberal. The Catholic Church, as represented by Sister Hildegard (Barbara Jefford, Kate Fleetwood in flashbacks), and the Reagan Administration do not fare as well. Frears tells "Philomena's" harrowing tale gently, perhaps a bit too much so. But Coogan and Pope have found a formula for the film that entertains while also enlightening those who haven't seen Mullen's (superior) movie.