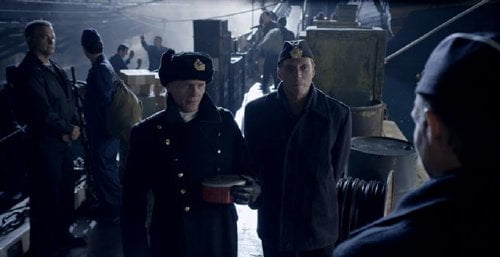 Captain Dmitri Zubov (Ed Harris) and his weary submarine crew have been on leave, following a grueling and long mission, for only a few scant weeks. Zubov’s commander (Lance Henriksen) orders him, and all the crew he can round up, to take an obsolete boat armed with a single nuclear missile on a secret mission with some very mysterious men who have their own deadly agenda in “Phantom.”

An intriguing premise based on a real life Rogue Russian submarine back in 1968 is ruined by muddled story telling which saps any suspense out of a vehicle that should have been fueled by it. Director Todd Robinson's ("White Squall") decision to have his cast forgo Russian accents would have worked better had he also instructed many of his supporting players to lose their regional American ones and the film's low budget is patently apparent. "Phantom" is a destitute man's "Hunt for Red October."

This is yet another “inspired by true events” story that seems to be proliferating during this fallow time at the multiplex (“Snitch” and “The Sapphires” are two others coming out). The “true events” in this case occurred when a Soviet electric-diesel ballistic missile submarine, K-129, went missing during its third patrol. The Soviet fleet frantically searched for the missing boat but to no avail. That is the true event portion. The “inspired by” delves into the nether regions of mystery. Is Captain Zubov the hero he is purported to be? What is the secret mission? A better question: who the heck are these shadowy sinister guys with all their secret equipment and an even more secret mission – that the captain is not privy to? So, the true events are barely recognizable as the plot thickens. And, I mean thickens. There is so much by way of mystery and suspense about revolving missions that make “Phantom” a confused mess. Acting is perfunctory and the original script, by director Todd Robinson, tries too hard to keep you second guessing. In reality, many of the plot twists are telegraphed, like David Duchovny as the boss of the secret, secret mission on the sub. He might as well wear a sign that says “BAD GUY.” William Fichtner, as Zubov’s loyal executive officer, Alex, is alone in making a strong and sympathetic character. Techs are OK and the cramped claustrophobia of pre-nuclear submarines is palpable. But, “Phantom” does not approach the last great submariner flick, “Das Boot (1981),” or any of the terrific WWII submariner thrillers like “Destination Tokyo (1943).”