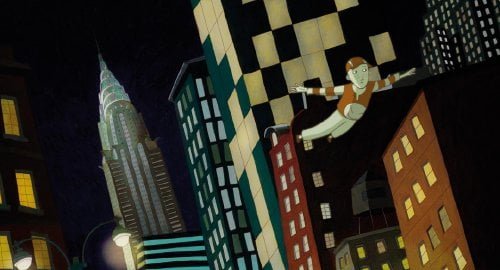 Leo is an ailing 11-year boy who must leave his beloved family to be treated for his cancer. The frail child has one benefit from the treatment: now, he can leave his physical body and fly, unseen, around the city. On one such journey, he meets and helps the spirit of an injured cop recuperating on the floor below in the hospital. The two form an unlikely alliance, with journalist Mary, to bring down a criminal fiend, the Man with the Broken Face, who threatens to destroy New York City in “Phantom Boy.”

Leo (voice of Gaspard Gagnol), a young boy undergoing chemotherapy, tells his little sister Titi (voice of Noa Bernaoul Savreux) that his illness has given him a special power - he can leave his body and fly over the city of New York. When a cop, Alex Tanguay (voice of Edouard Baer, "A Girl Cut in Two"), has a run-in with the mastermind who is threatening the metropolis with an all powerful computer virus, he ends up in the same hospital as Leo and is able to crack the case with journalist Mary (voice of "Amelie's" Audrey Tautou) and the "Phantom Boy." Belgian codirectors Jean-Loup Felicioli & Alain Gagnol's first film, "A Cat in Paris," combined elements of American gangster films, film noir and Picasso-esque cubist animation to tell an emotional tale about a little girl traumatized by her father's death. Their latest flips many story elements - a little boy, New York, a criminal dog - but tells a funnier, more emotionally rich story (screenplay by Gagnol) in the same unmistakable style. In an opening familiar to anyone who's seen an American renegade cop movie, an off duty Alex ingeniously foils two grocery store robbers only to inadvertently blow the place up. The Commissioner (voice of Yves Barbout) chews him out and reassigns him to port duty. Meanwhile, Titi reads Leo one of his favorite detective stories. When The Broken Face Man (voice of Jean-Pierre Marielle, "Micmacs") causes a city-wide blackout, it's his goons' yappy little dog Rufus who draws Alex's attention. He's badly beaten, but spies the uber-villain. Frantically trying to tell anyone who will listen (we see a responding cop, an ambulance worker and a doctor through his faintly blinking eyes), he's ignored. The Commissioner stops taking his calls. Then Alex meets Leo who is thrilled to participate. The conceit of using a phantom to assist in an investigation allows the investigator, Alex, to see hear and see things usually only a film's audience is privy to, yet the filmmakers maintain tension by adding love interest Mary to the mix. While he's out-of-body, Leo cannot move, but he can hear and speak, allowing him to convey back to Alex what he's seeing, his phantom self guiding Mary. But Leo can only split away for limited amounts of time and when that time comes, Mary is in grave danger. The animators revel in New York, Leo floating by the Chrysler Building, the Brooklyn Bridge, Times Square, alighting on the Statue of Liberty's torch. Most amusingly, he enters the Bada Bing club as Alex begs him to cover his eyes. Shapes repeat, the catlike eyes of humans reflected in the fish swimming in a hospital aquarium. A large black cat poster in Leo's living room nods back to "Paris." "Phantom Boy" brings in elements of the superhero movie too, its disfigured villain addressing the city via Times Square Jumbotrons, its protagonist caught between self-sacrifice and heroism. The film ends beautifully, the filmmakers investing a baseball cap with a universal life force. Grade:

This is the second animation feature by co-directors Jean-Loup Felicioli and Alan Gagnol who gave us the surprise, Oscar-nominated “A Cat in Paris (2010).” Their follow-up, “Phantom Boy” is not the action-packed thriller of its predecessor but a sweet and charming story about an ordinary little boy with an extraordinary gift. The filmmakers combine Leo’s story with policeman Alex and his one-man investigation into finding and stopping the Broken Face Man. “Phantom Boy” is, however, a true original that mixes Leo’s supernatural capability with the hard-boiled cop procedural that has Alex, single-handed, hunting down Broken Face and his henchmen. The criminals remind me, very much, of Cruella De Vil and her bumbling henchmen, Jasper and Horace, but not as utterly Evil as Cruella. Skinning puppies for a fur coat is far more heinous than infecting a city’s computers with a virus, don’t you think? The stylish animation shows the same imagination as their first feature. The filmmakers make it an original, though, with the Picasso imagery in Broken Face Man and the oversized bodies and tiny feet of the bad guy characters. But, it is the story of a boy’s hopes and dreams and desire to help Alex solve the big case and to live like the comic book detectives he so admires. “Phantom Boy” may have an adult theme but it can and should have appeal to a younger audience as well.