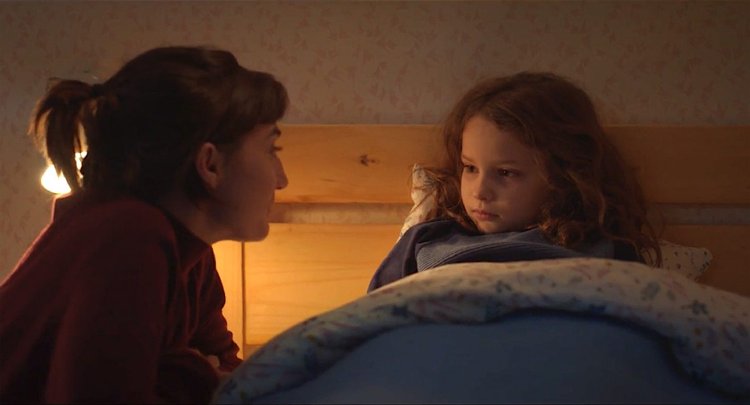 After watching her mother (Nina Meurisse, "A Woman's Life") take leave of an empty room in a nursing facility, eight year-old Nelly (Joséphine Sanz) asks if she can have her grandmother’s cane.  They then embark on a clearing out trip to mom’s childhood home, where her dad (Stéphane Varupenne, "Godard Mon Amour," wonderfully warm) is delighted to discover that his mother-in-law decorated around a dresser, leaving the old wallpaper behind it.  The next morning, Nelly’s dad tells her mom thought it better to leave and so while he attends to the business of closing up her grandmother’s house, Nelly begins to look for her mom’s childhood hut in the woods.  She finds Marion (Gabrielle Sanz), an eight year-old who looks a lot like she does, building one in “Petite Maman.”

Marion immediately invites Nelly home to her house, one which Nelly immediately recognizes as the one she’s just left, albeit one whose wallpaper still covers the entire kitchen.  The little girl makes the other hot cocoa, empathizing that her grandmother died recently too.  Nelly goes down a hallway to use the bathroom and peaks into a bedroom.  Alarmed to find a woman sleeping, a trapeze pull by her bed, Nelly leaves in a hurry, but after processing that she may be able to give her grandmother the goodbye which was denied her, she returns the next day.  Marion confides that she will need to undergo an operation soon in order to avoid the lameness which has afflicted the older woman, who then walks out with a cane, warmly welcoming her daughter’s new friend.

Sciamma does not dwell too heavily on her high concept, allowing mother and child to enjoy their eight year-old selves.  The girls’ shared imagination results in humorously adult role playing that allows Nelly to go to her grandmother for help knotting a man’s tie, then joining her in a crossword puzzle.  Nelly confides her secret to Marion, who accepts it seriously, asking a couple pointed questions about her own future and their relationship before returning to play.  Marion’s birthday is cause for a bit of third act drama, dad wanting to return to his wife while Nelly wishes to celebrate with Marion past.  Have no fear, Sciamma finds the perfect resolution.

The production is simple, two versions of the same modest home evoking the women who lived there divided by autumnal woods.  Hair and costume differentiate the twins, Marion wearing a headband and in red to Nelly’s blue.  Cinematographer Claire Mathon ("Portrait of a Lady on Fire") frames one shot delightfully, a close-up of Nelly sitting in front of that old strip of lone wallpaper, one foot in the past and one in the present.  “Petite Maman” may sound strange, but Sciamma has created a minor miracle, a strange idea turned into 70 minutes of reflection on the wisdom and humanity found in the inner life of a child.