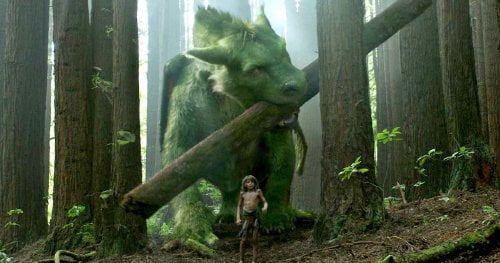 When he was just 5 years old, Pete (Oakes Fegley, "This Is Where I Leave You") went on an adventure with his parents into the forests of the Pacific Northwest, but when dad swerved to avoid a deer in the road, Pete found himself orphaned and alone. Close by in the town of Millhaven, old man Meacham (Robert Redford) tells kids about a legendary dragon he once saw with his own eyes, much to his forest ranger daughter Grace's (Bryce Dallas Howard, "Jurassic World") affectionate exasperation. But when she finds the now 11 year-old Pete, he answers the mystery of his survival with the very similar story of "Pete's Dragon."

Cowriter (with Toby Halbrooks)/director David Lowery ("Ain't Them Bodies Saints") hasn't exactly remade Disney's 1977 live action/animated film as much as reimagined it with "Jungle Book's" Mowgli as the protagonist, "The Neverending Story's" dragon (given a dye job), "E.T.'s" central conflict and "How to Train Your Dragon's" flying scenes. But if Lowery's take isn't exactly original, it is very well crafted family entertainment, one that actually had this critic all verklempt. One of the film's best conceits is the children's book that Pete crawls out of the car with, the tale of a lost dog named Elliot. When the big, green, puppyish dragon materializes, saving Pete from circling wolves, that's the name Pete gives him. In Millhaven, the bad guy is immediately marked. Gavin (Karl Urban, "Star Trek Beyond") is the brother-in-law of the town's chief employer, lumber mill owner Jack (Wes Bentley, TV's 'American Horror Story'), and when we meet him he's leading a team farther into the forest than regulations allow. This is the activity that draws Pete and Elliot out for a look, and when Pete spies Jack's eleven year-old daughter Natalie (Oona Laurence, "Southpaw"), his attention draws hers. She follows Pete into the woods and up a tree, but when she slips, her cries draw the adults, including Jack's fiancee Grace, who recognizes her compass around Pete's neck. After an overnight in the hospital, Pete's brought to Jack's house, a mystery to be solved. Elliot, whose camouflaging capabilities allow him to disappear completely, comes out into the open, searching for Pete. When he finds the boy in the warm family embrace of Jack and Grace, he despondently heads home. But Gavin's seen the dragon and is determined to bring it down and make his fortune. Unbeknownst to Pete, Jack and Grace have an appointment with Child Social Services, but Grace is intrigued by Pete's drawing of Elliot, one which looks like her dad's drawing, so she changes course to bring Pete 'home' along with dad and Natalie. She doesn't realize her actions will be interpreted as a betrayal. Lowery makes great use of his setting, layering in themes about man's fraught relationship with nature in what is essentially a boy and his dog movie (hey, add Pixar's "The Good Dinosaur" to that list of influences!). The magical dragon is beautifully crafted to look like an old school animatronic, CGI allowing for more fluid movement, the animal's sounds natural yet anthropomorphized with a hint of cartoonish exaggeration. Young Fegley is both feral and boyish, ably conflicting his fierce devotion to Elliot with his newfound contentment in domesticity. Bryce Dallas Howard, last seen ridiculously mishandling children around huge fantastical animals in "Jurassic World," sheds her heels for sneakers and enjoys a complete reversal in believability, her familial warmth shining through. The rest of the cast is serviceable, Isiah Whitlock Jr. ("Chi-Raq") playing pivot as Millhaven's sheriff. "Pete's Dragon" is an unusual followup to Lowery's Malick-influenced indie, but shows growth as a director. He's taken a commercial family vehicle and imbued it with heart and magic. Grade: