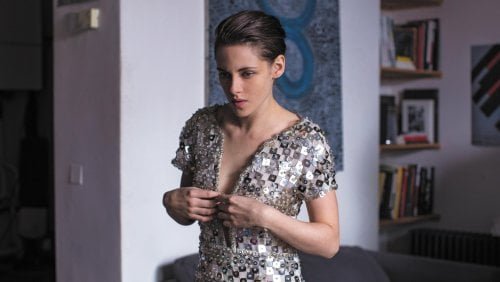 Maureen Cartwright (Kristen Stewart) has unusual gifts. She's a medium, blessed with the ability to sometimes commune with the dead and she's spending time in the big, empty, rambling house on the outskirts of Paris where her twin brother Louis lived and worked in order to make contact. He recently died of the same heart malformation which Maureen also has, but she doesn't believe the spirit in the house is him. During the day, she works for demanding model/actress Kyra (Nora von Waldstätten, "Clouds of Sils Maria"), who insists she never try on the fabulous designer goods Maureen chooses for her as a "Personal Shopper."

While this doesn't achieve the heights of his last Stewart-starrer, "Clouds of Sils Maria," writer/director Olivier Assayas has crafted a ghost story like no other, one in which an unmoored young woman's search for self may be causing her own psychic phenomena. Or may not be. "Personal Shopper" is a genre film unlike any in its class, an interior journey studded with spectral stumbling blocks, actual travel and one pretty horrifying murder. Maureen's calls for her brother in response to strange noises in his old home are answered with plumbing pranks. Frustrated, she continues to address him and is rewarded by the appearance of a spirit. But this spirit seems more threatening than brotherly and female in its countenance. She meets with a doctor, who tells her her condition requires her to 'avoid exertion and extreme emotion,' Skypes with boyfriend Gary (Ty Olwin) who encourages her to join him in Muscat and arrives at Kyra's, who will not get off a phone call to answer a question about a pair of leather pants Maureen's on the hook to return to a designer. Maureen has an interesting conversation with Ingo (Lars Eidinger, "Clouds of Sils Maria"), the married Kyra's former lover who is also waiting to get a word in, who offers her a job with Berlin Vogue. She declines, but opens up, telling him about Louis and how the twins had made a pact that whoever died first would send the other a sign. As Maureen mopeds around Paris fashion hubs, she begins to get text messages from an unknown sender ('I know you.' 'And you know me.'). Things escalate after Maureen returns from a Kyra-related trip to London with clothes and Cartier jewelry. She's agreed to meet her texter in a hotel room, but all she receives are more texts questioning what frightens and motivates her. She tries on Kyra's things and falls asleep, awakening in a panic. When she returns to Kyra's apartment, she's greeted with a one-two punch of lurking evil. Kristen Stewart is mesmerizing once again, confidently carrying out her duties with expertise and diplomacy, yet hesitant in her personal life. On the surface she appears calm, even about her brother's death, but the spirit(s) around her reflect her inner agitation. Assayas has filled his unusual film with all kinds of subtext, slipping in such observations as 'spiritualists embrace technology' and teaching us about Hilma af Klint, a mystic whose paintings preceded the abstract movement by twenty years. His frequent use of fades to black suggest closing chapters as Maureen attempts to move on. Visually, the film is a mix of dark antique (Louis's home, Muscat) and bright modern (Kyra's apartment, the Chunnel train), his portrayals of the spirit world simple (hovering objects, a spirit that resembles homemade French animation), yet effective. Costume, too, is a tale of contrasts, Kyra's extravagant getups presenting a distinctly different Maureen than the one who hides in neutral casuals. Sound is integral to the mood Assayas conveys in the rustling of Stewart's clothing, the ambient sound of cavernous rooms and a somber classical score. "Personal Shopper" is a haunting psychological thriller that challenges its audience to draw its own conclusions. Assayas may not give us answers, but his two closing scenes, one with Louis's girlfriend Lara's (Sigrid Bouaziz, "Eden") new boyfriend Erwin (Anders Danielsen Lie, "Oslo, August 31st"), the second in Oman, give us emotional catharsis. Grade: