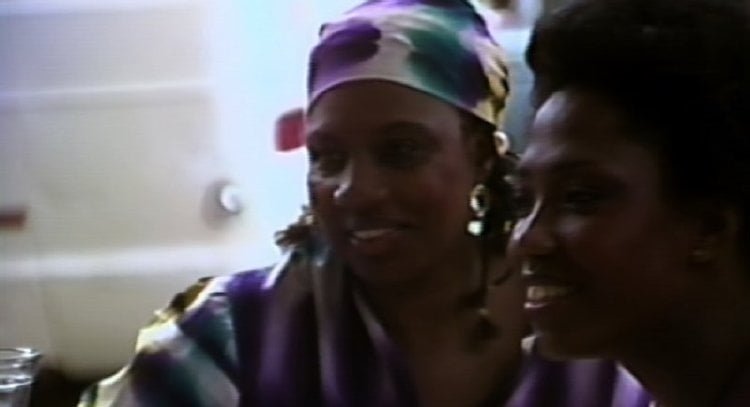 Johnnie Mae (Vertamae Grosvenor) and Charles Brown (Walter Cotton) are married, but not happily. Each is carrying on a suspected, though unconfirmed, affair but life still goes on, even when you have “Personal Problems.”

Before Spike Lee broke through "She's Gotta Have It," the history of black independent filmmaking was scant. There was Oscar Micheaux in the early silent era, then little but one-offs until Melvin Van Peebles arrived on the scene. Before "Personal Problems," playwright, novelist and actor Bill Gunn made a splash with his 1973 cult horror film "Ganja and Hess," but his 1980 followup, shot on 3/4" video, was little known. Now a restoration issued by Kino Lorber is about to change that. Based on an idea by Ishmael Reed (who costars as a Reagan loving business owner!), "Personal Problems" is a fly-on-the-wall look at real black life in New York City, a soap opera consisting of vignettes of varying tone and style presented in two parts totalling 164 minutes. There is no escaping the degraded look of early 3/4" video, digitized for the restoration, but the acting and storytelling immerse us into a real black experience of the time, unadulterated by Hollywood's cliches. Vertamae Grosvenor, who would later appear in the seminal 1991 "Daughters of the Dust," stars as Johnnie Mae Brown, a night nurse at Harlem Hospital who we first meet addressing the camera in a one-on-one interview. She's off center, slumped in a seat against a wall, gripping a Styrofoam cup of coffee. The questions and answers are surprising, Johnnie Mae talking about how she thinks she met a prophet the other night and the poetry she writes in her down time. Both comments are accompanied by offshoots to other scenes, both revisited in more context later on. From this odd but effective beginning, Gunn takes us to an outdoor cafe on 47th Street where Johnnie Mae drinks and gossips with Della (Margo Williams) and another friend about her new man and new look. Cut to Raymon (Sam Waymon) singing a love song at a piano, Johnnie Mae crying with emotion at his side. They take a drive out to a lake where they negotiate their next date, Raymon reluctant to meet her at a cocktail party. It is only after this that we learn Johnnie Mae is married, and not to Raymon. "Personal Problems" charts Johnnie Mae's life for 90 minutes, her problems increasing by the scene. She makes breakfast for husband Charles (Walter Cotton), trying to remember the title of 'A Raisin in the Sun' as a box of Raisin Bran dominates the frame. We learn that her unconventional father-in-law (Jim Wright) lives with them, but Charles is none too happy when she informs him her brother Bubba (Thommie Blackwell) and his wife Mary Alice (Andrea W. Hunt) will be coming to stay after a stint in prison. Johnnie Mae tells us that she loves her husband, but Raymon allows her to relax and be her true self. 'I'm not unhappy. I'm just not happy.' Part Two rewinds on the action we've already seen, before shifting focus to Charles, caught in bed with another woman by Johnnie Mae as Part One ended. His wife isn't shy about voicing how sick and tired she is, blasting those, including her own kin, who leech off her labors. When Charles's father dies, she gets more flak from her sister-in-law Rose (Barbara Montgomery). Brother-in-law Herb (Bill Terry) makes inappropriate comments to Charles and Johnnie Mae's daughter. Then Charles, Herb and two other men go out drinking in a scene that plays like a black outtake from Cassevetes' "Husbands." By the end of the film, there is hope for Johnnie Mae and Charles going forward. Yes, the film is long, but aside from Part Two's repetitions, Johnnie Mae and Charles's ordinary lives make compelling drama. Gunn's media may have degraded, but his shooting is smart (there's a very nicely composed of the two leads at their bathroom sink, its mirror splitting and uniting them). "Personal Problems" is of obvious historical significance, a fascinating time capsule. Grade:

Like most, if not all, film critics, I take notes when watching a movie to review. Generally, the notes are about plot lines, characters, locations and the look and tone as reminders for later. Sometimes, though rarely, I make editorial notes about a film’s premise (generally bad) and things that do not make sense or are unrealistic. I made a lot of editorial notes while watching “Permission.” The first thing about a film about relationships is that the viewer should actually care about the lead characters – a factor that is sorely absent in this second feature by writer-director Brian Crano. I was going to spend time on the story and its plot threads but, the more I think about it, why should I bother? I neither liked nor believed the main characters, their actions and motivations. Will and Anna make decisions that I, immediately, knew were bad and wondered why they would behave so, well, stupidly. For this, I blame the script by director Crano. I have always respected Rebecca Hall as an actress of note and Dan Stevens has proved his abilities beyond “Downton Abbey.” But, in “Permission,” there is no chemistry between their characters and the life decisions they make are more adolescent than adult. I do like Morgan Spector as Will’s best friend, Reece, the only character with a voice of reason. I want to like or, at least, be positive about every film I see. I cannot do that here.