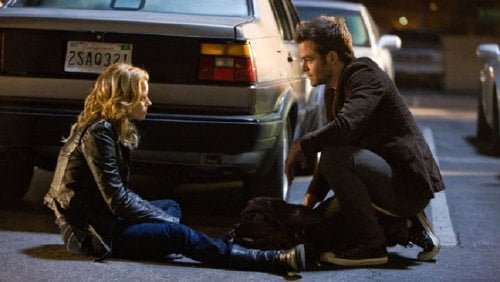 Sam (Chris Pine, "Star Trek") is a hot shot salesman in his early 20's who makes a bad mistake that could land him and his boss in trouble with the FTC. Already hurting for funds and now being squeezed by his boss, Sam gets shocking news - his estranged father has died. When his dad's old friend and lawyer (Philip Baker Hall) invites him out to lunch, Sam expects his money troubles to be over but instead he's handed yet another dilemma - dad's left $150K in cash for Sam to deliver to someone named Josh with a handwritten note saying 'Take care of them' in "People Like Us."

Cowriter (with Roberto Orci, "Cowboys & Aliens" & Jody Lambert)/director Alex Kurtzman moves away from the films and television projects he and his team are known for ("Transformers," TV's 'Hawaii Five-0') to make his directorial debut with an emotional family-driven story sprung from his and writing partner Orci's own experiences of reconnecting with unknown step-siblings. The film is well acted, with Michelle Pfeiffer in particular giving a lovely performance as Sam's mother Lillian, a former beauty of small town talent crushed by the star power her music producer husband orbits around and her own move to keep shining. Sam's lack of ID at the airport causes him to miss his flight, but girlfriend Hannah (Olivia Wilde, "Cowboys & Aliens") reroutes them. When the duo arrive at Sam's home having missed not only the funeral but most of its aftermath, it's clear from mom's expression that this is a long standing problem. Sam gets it from his mom for not even contacting his dad when it was known the man was dying and from Hannah when she realizes his 'lost' wallet at the airport was planned. Insult is added to injury when Sam tells her 'there is no we' and she leaves. Sam and his mom cohabitate, but that's about all. Sam gets drunk, smokes weed and goes on a musical nostalgia trip in his dad's den, but once Sam's given his mission from beyond everything changes. Sam is shocked to discover that Josh isn't an illegitimate offspring of dad's but the son of 30 year old Frankie (Elizabeth Banks, "The Hunger Games"), a half sister he never knew he had. As he begins to ease himself into their lives his moral dilemma and his own problems begin to fade as he tries to address those of the small struggling family who doesn't know he's a part of theirs. When he eventually tells Lillian the truth about what he's been doing, it reveals yet another family secret and a whole lotta healing starts coming on. "People Like Us" is the type of movie that can be incredibly manipulative, so it's to Kurtzman's credit that it mostly evades that type of button pushing. Banks is believable as a single mom whose unexpected child forced her to pull herself out of a downward sex and drugs spiral brought on by the scars of being abandoned by dad, but she lives in one of those LA motel/apartments and her kid is acting out for reasons unknown to her. Sam, of course, manages to connect with Josh (Michael Hall D'Addario, HBO's 'John Adams'), a cutie with a Joey Ramone haircut and a talent for drumming. Sam catches Josh shoplifting at Rhino Records and shuts that down as well as dispensing musical advice (Gang of Four, the Buzzcocks, The Clash and Television). Later, he passes down his dad's rules to live by - well written stuff. If there's a problem with the film, it's Sam's inability to tell Frankie the truth. They bond at the laundromat and Henry’s Tacos, but it's creepy the way Sam just keeps popping up and the film begins to lag and sag until Frankie finally makes the inevitable move. For its length, the character of Ted (Mark Duplass, "Your Sister's Sister"), Frankie's neighbor and occasional sex partner, seems an indulgence as he has practically no dialogue and very little relevance. The film goes out with Sam making peace with each of the three women in his life to increasing effect - the final shared moment with Frankie really earns the emotions it evokes. Production design is in keeping with the film's characters, making use of an everyday L.A. Interiors also reflect characters' lives, with Sam's family home vaguely dingy and shrouded and Frankie's brighter but transient.