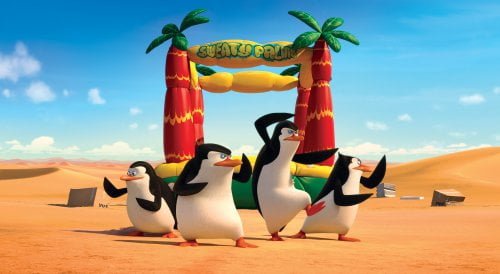 Skipper, Kowalski, Rico and Private are back and this time they have to join forces with the secret organization, The North Wind, to battle the nefarious Dr. Octavius Brine (or, Dave, as he prefers to be called). Dave’s plan for revenge is to turn all the cute and cuddly penguins in the world into monsters in “The Penguins of Madagascar.”

Dave the octopus (voice of John Malkovich) was a much loved zoo attraction until something cuter and cuddlier came along. Masquerading as geneticist Dr. Octavius Brine, he travels in a submarine with his octopi henchmen and a giant laser with which he hopes to exact revenge on "Penguins of Madagascar." If only the rest of the film were up to its opening origin story, a hilarious takedown of "March of the Penguins" in which Skipper (voice of Tom McGrath), Kowalski (voice of Chris Miller) and Rico (voice of Conrad Vernon) cleave from the colony to save the egg, with a little nudge from a documentary filmmaker (voice of Werner Herzog, who also narrates the sequence), that hatches Private (voice of Christopher Knights). As it continues, this delightful animation still has plenty to offer, but much like Disney's "Big Hero 6," it eventually devolves into something we've seen before (in this case, "Wallace and Gromit: The Curse of the Were-Rabbit"). Screenwriters John Aboud, Michael Colton and Brandon Sawyer (TV's 'The Penguins of Madagascar') have created a worldwide adventure that launches the black and white special ops team and serves as a means for Private, who the rest treat as a mascot, to become a valued team player. After sailing away on their own berg, we're treated to an inventive sight gag as the boys break into Fort Knox. But what they're after isn't gold, its a vending machine with the last cache of their favorite snack, Cheesy Dibbles. Turns out they're not the only ones with a taste for cheese, and so they come up against Brine piloting his huge purple sub through the canals of Venice. A wild gondola chase ensues, bringing the lads into the path of the North Wind, a high tech covert ops organization led by Agent Classified (voice of Benedict Cumberbatch), a wolf who explains their mission is to protect species who cannot protect themselves. Skipper is more than miffed and the two, with their wildly different approaches, continue to collide in their efforts to bring down Dave, who's begun to kidnap the world's penguins. Up until its last act, "Penguins of Madagascar" is the 'Frasier' of spinoffs, with laugh-out-loud dialogue ('That's disgusting. I think I have amniotic sac in my mouth.'), witty sight gags (Dave's last zoo tank) and wild adventures (a reversal of direction involving a series of international airlines ending with an airborne landing on a Sweaty Palms bounce house). The original "Madagascar" gang is featured in brief cameos as the birds make their way around the world. In addition to Classified, new character include Cricket (voice of Sean Charmatz) and North Winders Short Fuse (voice of Ken Jeong), a cute seal, Owl Eva (voice of Annet Mahendru, FX's 'The Americans'), a romantic match for Kowalski and giant polar bear Corporal (voice of "Fargo's" Peter Stormare). Grade:

It is about time the quartet of penguins from “Madagascar” finally gets their own feature length animation and it is a rollercoaster of a fun ride. Skipper (Tom McGrath), Kowalski (Chris Miller), Rico (Conrad Vernon) and Private (Christopher Knights), back in their zoo days, were a major attraction, as they are in all zoos. Dave was also an attraction but the cute and cuddlies stole his show regardless of where he is. He is pushed a penguin too far. Dr. O has developed the Medusa Serum, giving him the power to mutate penguins from everywhere into un-cute and un-cuddly monsters. It is up to the boys and members of The North Wind – Classified (Benedict Cumberbatch), Short Fuse (Ken Jeong), Eva Annet Mahendru and Corporal (Peter Stormare) – to thwart Dave’s dastardly plans. With “Penguins of Madagascar” the getting there is the main thing. Directors Eric Darnell (helmer for all the “Madagascar” franchise) and Simon J. Smith (with help of scripters John Aboud, Michael Colton and Brandon Sawyer) create a rousing action adventure that is steeped in laugh out loud humor. The rapid fire antics of our heroes and their snappy wordplay, the colorful cast of characters and the non-stop action make “Penguins…” a real treat for the entire family or anyone who likes a good laugh.