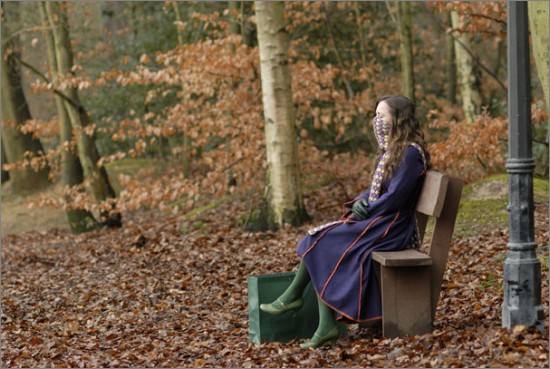 When Ralph Wilhern got a family serving girl pregnant, his intent to actually marry her was ridiculed. But when he took a bride from his own social strata, the maid's mother, a witch, cursed the family's next female child with the face of a pig. Down the generations, the Wilherns luck held until Ralph's grandson Franklin (Richard E. Grant, "Withnail & I," "Colour Me Kubrick: A True...ish Story") and his wife Jessica (Catherine O'Hara, "For Your Consideration") gave birth to "Penelope."

Although this "Beauty and the Beast" reversal suffers from some miscues and lapses of logic in television writer Leslie Caveny's ("NewsRadio," "Everybody Loves Raymond") script, it largely floats on charming performances from leads Ricci and McAvoy with solid support from exec producer Reese Witherspoon ("Walk the Line," "Rendition") as a punk rock motorcycle messenger and Peter Dinklage ("The Station Agent," "Death at a Funeral") as tabloid journo Lemon. The fairy tale is also buoyed by a whimsical production design mashup (which ironically brings to mind the mixed global landmarks of "Babe: Pig in the City") and costume design by Jill Taylor ("Match Point," "Cassandra's Dream") which blends period references. We first meet Penelope (Christina Ricci, "Black Snake Moan") as yet another wealthy suitor, Edward Vanderman Jr. (Simon Woods, 2005's "Pride & Prejudice," "Starter for 10"), flees the Wilhern Estate in horror (the curse specifies that Penelope must be accepted for who she is by one of her own kind before it will be broken). This time is a little different, however, as the family butler has been unable to catch the lad in order for him to sign a media gag. When the police scoff at Vanderman's claims of a hideous pig monster with fangs, he goes to the newspapers and finds a reporter with a long-standing interest in the Wilhern story - Lemon was blinded in one eye by Penelope's mother when he tried to snap a picture of the girl as an infant. The duo team up and go in search of Max Campion, an aristocrat with known gambling debts, as a suitor for hire to get their photographic evidence. Max (James McAvoy, "Atonement"), however, who intrigues Penelope enough she keeps behind her two-way mirror in order for him to get to know her better, becomes disdainful of the plan, even after he has seen her face. Yet Max knows something Vanderman and Lemon do not and, in what is not immediately seen as a chivalrous act, refuses to marry the girl. When Penelope takes matters into her own hands and rebels, going out into the world, the expected reaction ricochets - Penelope becomes hugely popular with the public. The largest failing of "Penelope" is that she is just not hideous and the horrified reactions of scores of suitors are completely unwarranted. Ricci's enormous eyes, cupid-bow mouth and long curling locks are far more prominent that the Twilight Zone 'Eye of the Beholder' pig snout in the center of her face. Because of this imbalance, the film seems to drag. Additionally, although the curse is broken in perhaps an unexpected way, one need only recall the immediate family dynamic to find its flaw. Yet Caveny injects some well needed logic and humor that partially offsets the script's failings. For anyone who thinks to ask why the wealthy Penelope could simply not undergo plastic surgery, we are told that her carotid artery wends right through the bridge of her snout. The film's prologue has some tongue in cheek fun with the Wilhern progeny and there is a delightful montage of Max taking every position in a band as Penelope tries to 'find his instrument' (something mother believes he should be solely capable of). When every little girl dons a snout for Halloween, one laments that 'everyone's Penelope and I'm stupid Static Cling.' Ricci is sweet in the title role and enjoys nice chemistry with romantic lead McAvoy, who sports an American accent in this pseudo-London setting. Dinklage is wonderfully dry as Lemon yet with enough warmth to keep his character from being a villain. Richard Leaf ("Hannibal Rising," "Harry Potter and the Order of the Phoenix") is a standout as Jack the Barman, who teaches Penelope the art of 'catching a pint' and Reese Witherspoon plays well against her usual type as Penelope's perky first girlfriend. Feature debuting director Mark Palansky gives a little too much free rein to the broad O'Hara while Grant's benevolent befuddlement isn't given enough prominence. Simon Pegg's "Shaun of the Dead/Hot Fuzz" costar Nick Frost provides some amusing, boozy background as one of Max's poker opponents. "Penelope" failings don't deep six it, but they seriously undermine it. This could have been a stellar fairy tale. Still, there's enough heart and imagination on display to end happily ever after for its target audience.

Penelope is the pampered 25-something year old daughter of filthy rich socialites, Jessica and Franklin Wilhelm. Generations ago, the family really pissed off an old crone who just so happened to be a witch. She pronounces the Wilhelm Spell on the family and the young woman, the first recipient, must hide the obvious results of the curse until she finds “the one who will love her faithfully” in “Penelope.” OK. If I were a twelve or thirteen-year old girl whose hormones were in an uproar and thinking that “I am soooooo ugly!” I would identify with Penelope. Fortunately (or is that “Thank God”?), I am not. The target audience for this good-looking trifle is in that age range and, among them, it should be popular. It is a romantic fairytale telling, plain (well, not so plain) and simple, by first-time feature helmer Mark Palansky, of scripter Leslie Caveny’s original fantasy yarn. From a production and set design point of view, Penelope” has that same odd hybrid air that permeated Babe: Pig in the City.” It feels like London but it also feels like New York City as the Wilhem parents search for a suitable suitor to wed their cursed daughter. Her sizable dowry, though, is not incentive enough once the potential grooms come nose to nose with Penelope. In walks down-on-his-luck gambler, Max (James McAvoy), who is hired by a sleazy journalist Lemon (Peter Dinklage) to pose as a suitor and get a photo of Penelope and unmask the truth about the curse. This is where the romance, of sorts, kicks in and you know the outcome right from the start. That is, unless you are a twelve or thirteen-year old girl whose hormones are in an uproar and thinking that “I am soooooo ugly!”