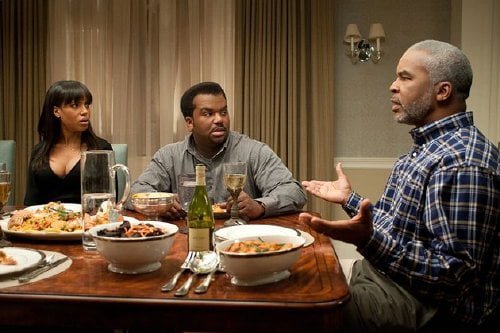 Wade Walker (Craig Robinson) is a regular Joe who is madly in love with his blue-blood girlfriend Grace (Kerry Washington). He wants to pop the question to her but wants everything to be just right. He hatches a plan to crash the family’s posh get together for Moby Dick Day and propose to Grace in front of all, but is not at all ready for the reaction of the “Peeples.”

Children's entertainer Wade Walker (Craig Robinson, TV's 'The Office') has been waiting for the right time to propose to live-in girlfriend Grace Peeples (Kerry Washington, TV's 'Scandal'), so when she tells him she's going to a family get together for Moby Dick Day in Sag Harbor he decides what better place? There's just one problem - Grace has been avoiding having him meet her parents, so Wade takes matters into his own hands at shows up unannounced at the "Peeples." "Peeples" is actually a pale remake of "Meet the Parents" with an African American cast, and it's the cast that makes it tolerable. Writer/director Tina Gordon Chism (screenwriter "ATL"), making her directorial debut under Tyler Perry's 'produced by' credit, takes contrivance and implausibility to new heights here, and the film often feels choppy, payoffs that never come possibly chopped to tighten run time. Each member of the Peeples family has something to hide and they all strive to maintain the version of themselves most likely to meet the approval of patriarch Virgil Peeples (David Alan Grier, TV's 'In Living Color'), a judge with exacting standards. His wife Daphne (S. Epatha Merkerson, TV's 'Law & Order,' "Lincoln") is an alcoholic who sneaks highs from her garden's weed and mushrooms. Grace is a UN lawyer who expects dad to find Wade an unsuitable partner. Sister Gloria (Kali Hawk, "Couples Retreat") passes off her lover Meg (Kimrie Lewis-Davis) as her long term bestie and younger brother Simon (Tyler James Williams, TV's 'Everybody Hates Chris') is a thief. All of this is easily found out by Wade, who also uncovers Virgil's secret membership in the local nudist society with the town's Mayor Hodge (Ana Gasteyer, TV's 'Suburbia'), but everyone's actions always end up casting Virgil's suspicion on him. A lot of the comedy is forced. It would be apparent to anyone with eyes that Gloria and Meg were a couple. Sag Harbor, certainly the enclave of white rich men, has an upscale market whose customers and staff are comprised of African Americans except for the two old white women on hand to make racist remarks. Wade runs into not one, but two of Grace's former boyfriends at this market, and then...nothing's ever made of it. Wade's brother Chris (Malcolm Barrett, TV's 'Better Off Ted,' "Larry Crowne") also shows up uninvited, an unlikely development, only to challenge Gloria's sexual orientation which, again, goes nowhere. And there's never any explanation as to how a judge ended up with a 'nasty' Disco singer. But Chism does pull off a few good scenes. There's a clever dual 'music video,' as Wade discovers former Disco Queen Daphne's headdress next door to the hip hopping Simon. A visit to Grandma (Diahann Carroll, "Eve's Bayou") and Grandpa's (Melvin Van Peebles, "Sweet Sweetback's Baadasssss Song") reveals the generational motivation for Virgil's behavior. A macho showdown between Virgil and Wade in a Native American sweat lodge is amusing. Robinson keeps Wade's character from becoming a cartoon, grounding a lot of the chaos around him. He and his prospective mother-in-law enjoy a warm chemistry (Merkerson is the movie's standout). Kerry Washington, however, plays the comedy too broadly, off kilter from the rest of the cast. "Peeples" isn't very good, but it's amiable and a preview audience found it quite hilarious.

The word you need to be aware of when going into “Peeples” is: formula. In this case, the characters are all African-American but you can plug any race into the mix and you would get the same movie. This lack of creativity by writer-director Tina Gordon Chism is probably due to inexperience of the tyro auteur. The story smacks of other fish-out-of-water yarns and closely hews to the cliché of such films as “Meet the Fockers” and others of that school. Craig Robinson reprises Ben Stiller’s character in the aforementioned movie as the poor schmuck who has the misfortune of falling in love with someone out of his class. For nurse Stiller it was the daughter of a highly-placed former FBI agent (Robert DeNiro). For poor old wade, it is Grace Peeples (Kerry Washington) he falls for, the daughter of her Federal Court Judge father, Virgil (David Alan Greir) and UN attorney mom, Daphne (S. Epatha Merkerson). Dad takes an immediate dislike (just like DeNiro’s Focker) to the potential mate for his precious daughter, a guy who sings to school kids on how to express themselves about peeing. According to Wade, he’s “a counselor with a ‘k,’” a career path that Virgil finds totally unacceptable. Nothing surprising or original happens in “Peeples” as Wade struggles to endear himself to the Peeples family, including Grace’s closeted sister Gloria and her more than just a friend Meg. Virgil, of course, is the hold out in accepting Wade and, because of his unrelenting hate for Wade, his character lacks arc. Virgil’s unbridled derision of Wade grows tired as the film progresses and is a one note performance for David Alan Grier. It is not his fault and the actor is actually able to garner a chuckle or two from me – especially in the sweat lodge scene. This is the single funniest bit in this clichéd family comedy. “Peeples” looks good and the cast does a fair job with the material. Newcomer Chism does a decent job eliciting performances from her actors but should have given the writing task to a more experienced scribe. More imagination and originality could have made a better movie. Still, it hits the right buttons with its intended audience.