Pearls of the Deep 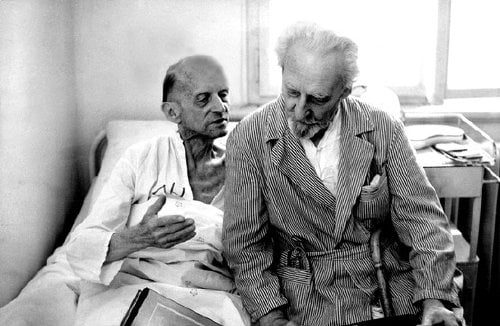 Five filmmakers of the Czech new wave honored one of their country's great writers, Bohumil Hrabal, each adapting one of his short stories from "Pearls of the Deep." Although death hangs heavily over the project, there is also a comic element.

Jiri Menzel, who went on to direct two features based on Hrabal's books ("Closely Watched Trains" and "I Served the King of England"), is first up with "The Death of Mr. Baltazar." But the film isn't based on Baltazar but a married couple and old man traveling to and attending a motorcycle race. As the old man prattles on about the indignities suffered a Baron's estate, the husband and wife attempt to fix their 1931 Walter convertible by the side of the road while taking turns identifying bikes by their engine noise. Once at the race, the man recounts all the accidents he's seen to a one-legged bystander while his wife states that motorcycle racing is superior to car racing due to its balletic qualities, which Menzel highlights with his shooting and scoring. When the titular racer has a fatal crash, the one-legged bystander appropriates the other man's stories, noting 'I have to see everything.' Themes from the first are carried into the second, shortest of the five. Jan Nemec's ("Diamonds of the Night") "The Swindlers" showcases two old men in an old age nursing facility trying to top one another with their stories. Again we hear talk about throwing oneself out a window (Hrabal himself died by falling(?) out a window). An abrupt shift to the facility's morgue finds two attendants discussing the men's trumped up career claims. Evald Schorm, the 'lone righteous man' of Nemec's "A Report on the Party and the Guests," directs the only color segment, "The House of Joy." A man who hates the way he makes his living, selling goat pelts, is a naive artist who's covered his house with his 'dreams and daydreams.' As he takes two insurance salesman about the place, one presses the nonsensical sale while the other becomes absorbed in the art. After a time, the old man's mother(!) pops up from under a coverlet and commences to tell the tale of what happened the one and only time they managed to sell an artwork, a crucifixion scene which wrecked havoc when placed along a road. 'Thwarting official business!' is the consensus of the hard seller. The short features an eerie dream-like vision of the artist dancing with knives among his herd (he wishes he could bring them all back from the dead) in slo mo, a sped up flashback of the crucifixion incident and opens and closes with large bunnies hopping around backyard art. Vera Chytilová's ("Daisies") "The Globe Buffet" is a disturbing divergence of a wedding banquet, a suicide and a man depressed over the loss of his fiancee (who always wanted to jump out a window!) within a restaurant. Once again we see officials clashing with workers (the police order the restaurant to close) and a man spinning a long tale within the proceedings (not only do we hear about his tortured engagement, but his subversive graphic art). The police who come because of the suicide end up engaged in the other stories as the drunken bride leaves with the artist, their path through the darkened streets followed in ghostly images. Lastly is Jaromil Jires's ("Valerie and Her Week of Wonders") "Romance," which begins with a tip of the hat to France's New Wave and Godard's "Breathless," as young Gaston fancies himself FanFan Tulipan outside a cinema and catches the eye of a young Gypsy girl. She asks him to buy her a sweater seen in a shop window and offers herself in return. Turns out she's quite the negotiator who may make his earlier wish come true. Usually omnibus films are uneven affairs, but "Pearls of the Deep" is a gem of a sampler of 1960's Czech filmmaking, all tied together by one author's themes. Only the last of the stories is more straightforward than allegorical, but its merging of movie magic and real life proves a fitting end.