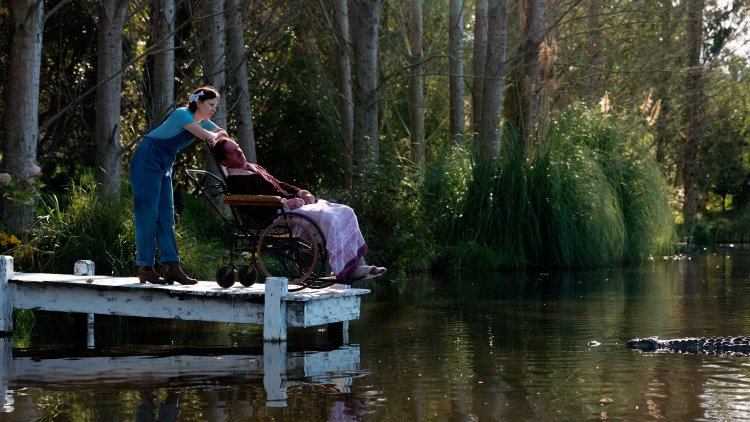 It is 1918 and a starry-eyed young woman (Mia Goth, "X") is dealing with the harsh realities of tending to a Texas farm under the watchful eye of her strict German mother Ruth ("X's" intimacy coordinator Tandi Wright) as well as caring for her infirm father (Matthew Sunderland, "The Nightingale") during the Spanish flu pandemic and the World War which has separated her from her husband, Howard (Alistair Sewell, "The Power of the Dog").  Her desire to break free from this life is fueled by silver screen fantasies and sexual stirrings, frustrations which curdle into psychopathic tendencies within “Pearl.”

Cowriter (with his star Mia Goth)/editor/director Ti West as well as his long term cinematographer Eliot Rockett made a huge leap forward with their “Texas Chainsaw Massacre” homage “X” earlier this year, a movie which ended with the promise of an equally inspired prequel.  “Pearl” isn’t quite as good as its predecessor, but its embrace of the glorious, super-saturated Technicolor movies of Hollywood’s golden age is simply stunning, its “Wizard of Oz” references cheeky and Goth’s performance rigorously unbalanced.

Pearl’s aspirations to show business are in direct conflict with her mother’s idea of responsibility and work ethic yet both women share the status of being tied down by events not of their choosing.  Ordered to the barn, Pearl appears to be connected to its cow and other animals, but when a goose wanders in, the pitchfork comes out, and that alligator in the swamp out back gets a tasty snack.  Sent into town to buy her father’s medicine (and warned to wear a face covering), Pearl uses the change for a showing of “Palace Follies,” imagining herself within the black and white spectacle.  The theater’s projectionist talks her up afterwards in its back alley, offering to show her anything for free if she knocks on his back door.

Pearl finds someone else eager to support her dreams in sister-in-law Misty (Emma Jenkins-Purro), who arrives with her mother bearing food Ruth declines as ‘charity.’  It is Misty who tells Pearl about the Church dance audition, something they will both have to sneak away to attend.  Soon Pearl is found with her father in his wheelchair perilously close to the end of a pier and that theater projectionist soon finds out he’s getting more than he bargained for.

Goth begins with one foot on either side of the looney line, edging over it gradually with a performance that remarkably keeps us somewhat on her side.  She holds the screen with a minutes long, unbroken ‘confession’ to Misty of how terrified she is of her own thoughts before snapping back into murderous conviction and treats us to the increasingly maniacal grin that greets Howard home from the war over the closing credits.

With “X” and now “Pearl,” Ti West is upping his game.  He’s now got a franchise on his hands with multiple directions in which to take it – the fifty year gap between the first two films and the continuing adventures of “X’s” Maxine.  I, for one, am up for both.