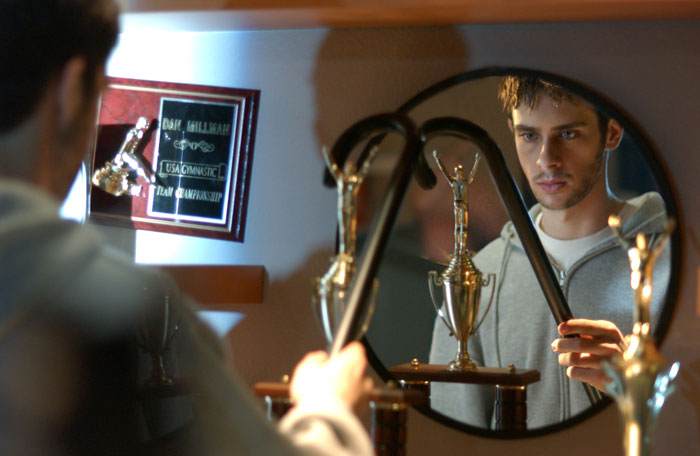 Dan Millman (Scott Mechlowicz) is an ambitious, potentially great college gymnast but it is this ambition that keeps him from achieving the success he so craves. When he meets the eccentric and aging attendant at a nearby all-night gas station/convenience store, a man he dubs Socrates (Nick Nolte), he doesn’t know it but his life, mind and spirit will undergo major change and he will become the “Peaceful Warrior.”

Movies about gymnastics are a pretty hard sell but when you bring an element of mysticism into the mix, it can open up new horizons and bring in a larger audience. This is what I hoped while watching Peaceful Warrior” and, for me, it achieved a new horizon, not brilliantly but solidly. Dan Millman penned the novel based on his own experience as a gymnast, adding a spiritual element when, one night when his character has trouble sleeping, he bicycles to the all-nighter to grab some snacks. He meets the crusty Socrates who, somehow, knows that Dan has something special within but his relentless ambition to be world-class best is blocking him from achieving this very goal. Socrates presents Dan with wise bon mots about how the spirit of the sport and doing ones’ best is more important than being great. But, these words are lost on the young man as he eschews the advice and continues his dangerous course to make the US Olympic gymnastics team. He pushes the envelope when he races his motorcycle through the city streets to the tragic ends that he had previously had nightmares about, shattering his leg in 17 places. His days as a competitor, the doctors tell him, are over. Millman returns to the gas station and the wisdom of Socrates and begins his real training to find himself. Director Victor Salva combines the Zen story of finding ones’ soul with the master/student sentiment of “The Karate Kid.” But there is more to “Peaceful Warrior” than just regurgitating a cliché, thanks mainly to a good performance by Nick Nolte as Dan’s mysterious sensei, Socrates. Nolte’s character is the heart of the film and helps to raise the stakes to make it more than just a routine sports film. Add to this the physically taxing performance by Scott Mechlowizc as the title warrior and the result is something that really lays claim to the mystical. The rise and fall, and much redefined rise again, of an athlete who finds his true soul keeps your attention through the entire two hours. The relationship between Dan and Socrates overshadows any and all of the others in this Zen play that delves into the spirit of inner perfection. There is a nice chemistry between Dan and his mentor that makes you want Socrates to instill his years of learning and study in his student’s heart. It’s a tough sell for the muse but, when Dan screws up and is mangled in the bike accident of his own making, Socrates’s wisdom finally strikes home and Dan begins his real training to be the best. It’s an inspirational story of the making of a true athlete. It’s a bit hokey but you get by that whenever Nolte is on the screen. Unfortunately, “Peaceful Warrior” is little more than a blip on the summer film radar screen. It hasn’t been marketed with any vigor, making it something more readily caught when it goes to DVD release. See it for the gymnastics and enjoy it for Socrates.