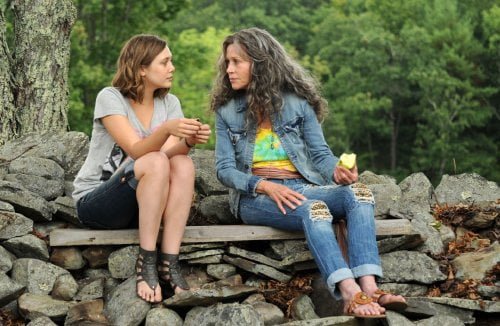 After not talking to her hippie mom Grace (Jane Fonda) in twenty years, tightly wound lawyer Diane (Catherine Keener, "Please Give," "Cyrus") takes the two teenaged children her mom's never met to Woodstock for a family reunion all about "Peace, Love & Misunderstanding."

Working with a script by first-timers Joseph Muszynski & Christina Mengert, director Bruce Beresford ("Driving Miss Daisy," "Mao's Last Dancer") makes good use of his cast, but cannot salvage cliched material. This one plays like "Wanderlust 2: Family Reunion" without as many (intentional) laughs. Jane Fonda, believe it or not, was better served six years ago in the J-Lo vehicle "Monster-in-Law," but at least we have HBO's 'The Newsroom' to look forward to. Diane gets caught short by husband Mark's (Kyle MacLachlan, "Blue Velvet") divorce demand on the threshold of empty nesting. This is what drives her to take her poetically inclined vegetarian daughter Zoe (Elizabeth Olsen, "Marcy Martha May Marlene") and her aspiring filmmaker awkward son Jake (Nat Wolff, "New Year's Eve") from Manhattan to Woodstock to meet their legendary hippie grandma, the opposite of their straight-laced Republican mom. Grace lives in one of those fabulously arty, sprawling farm houses nestled in an idyllic setting that only those who make pottery and sell weed to friends can afford. She's thrilled to see the daughter who hasn't spoken to her since having her arrested for dealing dope to Diane's wedding guests. It's enlightenment time! Diane's kids apparently skipped a generation because they are, of course, chips off the older block. Conflict arises, though, not only because of this intergenerational mismatch but through the personal journeys each takes, all requiring a new romantic partner. Zoe is appalled to be attracted to Woodstock's organic butcher Cole (Chace Crawford, "What to Expect When You're Expecting") and judges him with a closed mind as he continues to pursue her. Shy Jake falls for Tara (Marissa O'Donnell), an outgoing girl trying everything to get him out of his shell. Diane catches the eye of one of her mom's protesting buddies, Jude (Jeffrey Dean Morgan, "Watchmen"), a carpenter with no college degree but with a little secret in his history. Grace floats about in her caftans painting nude men, raising chickens and sprinkling fairy dust on everything. Romantic obstacles are strained, as is Zoe's horror at seeing her not-yet-divorced mom kiss another guy. Diane's outrage over her kids presence at one of her mom's peace rallies defies reason. Grace is supposed to be a hilarious character because she's a grandmother who smokes pot and has sex. Only the calibre of the cast keeps this thing watchable and it's surprising who stands out. Jeffrey Dean Morgan has almost a Javier Bardem-like charm here, a side of him I haven't seen before, and he's a very relatable character. Chace Crawford is also good as the dreamy embodiment of 'The Omnivore's Dilemma' (the book he gifts to Zoe), if every so slightly too earnest. For some reason, Roseanna Arquette is in this, but she barely has any lines and is mostly seen in a silly howling at the moon scene. The film starts with a Woodstock reunion and so must end with a Manhattan one when Jake presents the 'film' he shot that summer. It may be the worst film-within-a-film I've ever seen, but in this world it's award winning (and cathartic for all involved). "Peace, Love & Misunderstanding" has a few nice individual scenes, pretty if unrealistic art direction and a good cast but at best it's something to watch on cable when there's nothing else to do and nothing to lust after or wander for.