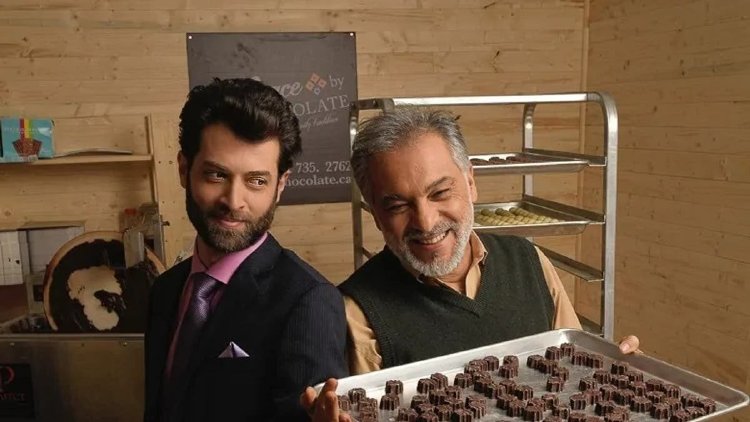 When Syria’s best chocolate factory is bombed, its owner’s family insist it is time to leave.  Issam’s (the late Hatem Ali) son Tareq (Ayham Abou Ammar), who has almost completed his medical studies, acts as their lead scout, but is stunned to end up in the snowy town of Antigonish instead of Toronto.  With one year to become financially independent, Tareq’s desire to become a doctor will clash with his family’s needs as their Canadian benefactor Frank (Mark Camacho, "X-Men: Days of Future Past's" Nixon) attempts to broker “Peace by Chocolate.”

That title is the name of the business Issam was able to rebuild beginning in Frank’s kitchen before expanding to a wooden shed.  Cowriter (with Abdul Malik)/director Jonathan Keijser makes his feature debut with a true story from his Native Nova Scotia which illustrates both the struggles and the triumphs, the foes and friends, of refugees forced to build a new life after losing everything.  There’s a little bit of “CODA” in the familial conflict which finds Issam telling Tareq he would ‘be illiterate,’ if his son left to attend the one, far off university which will accept him, although in this instance the family really is utterly dependent on their English speaking son.

After establishing the family’s dire straits in their home country, Keijser embraces fish-out-of-water comedy, Tareq greeted at the airport by Frank’s wife Heather (Cary Lawrence) and their friend Zariah (Kathryn Kirkpatrick) who promptly slap a woolen hat declaring Canada! on his head.  He is adrift exploring the snowy town, unable to decipher a friendly mailman’s ‘How’s she goin’, eh?’  After beginning the process to get the remainder of his family over (Issam and Shahnaz (Yara Sabri) resist leaving daughter Alaa (Najlaa Al Khamri) behind until they run out of options), Tareq is put in touch with Syrian surgeon Nadim (Mark Hachem) who tells him the harsh reality that for refugees like him, ‘Paramedics drive ambulances.  Doctors drive cabs.’

Issam, who speaks no English, feels useless until he wanders into the town’s lone chocolate shop run by Kelly (Alika Autran), but he’s hustled out by Tareq when he attempts to show her how to improve her wares.  Instead he returns, buys base ingredients, and whips up a superior product.  Frank, whose waistline is expanding from Issam’s sweets and Shahnaz’s kibbeh, sets Issam up with his initial sales outlet at their church and Kelly goes on the warpath.  When Peace by Chocolate opens for business on a sidewalk, their success draws media attention, more trouble from Kelly, a mention from Justin Trudeau and Jim (Eric Davis), the head of a supermarket chain who wishes to invest.  Tareq views the latter as his ticket to university freedom, but Issam sees things very differently.

“Peace by Chocolate” is an uplifting comedy which favors familial conflict over xenophobia as its obstacle (Kelly mostly represents the latter, although a headline, attempted U.S. border crossing and one of Frank’s friends fill in blanks).  Ammar is the ostensible star here, but his character’s flaws promote Ali and Camacho to more favored status, Camacho’s Frank simply a stellar human being, Ali the film’s heart.  Hachem is overused, an awkward fit serving no real purpose after setting Tareq straight.  Lawrence, Kirkpatrick and Laurent Pitre as shop employee Liam all add cheery Canadian color.

The film leans a bit too far into sweet and sticky sentiment, akin to Lasse Hallstrom’s films for Miramax without his slick, professional sheen, but it tells a great story and does so with heart.