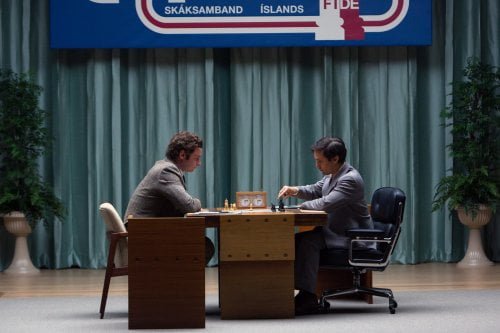 1972 was a momentous year. Nixon made his historic visit to China, US involvement in Vietnam was winding down, the Strategic Arms Limitation Treaty was signed by the US and the USSR and a murderous terrorist attack against Israeli athletes took place during the Munich Olympics. One event, though, captured the attention and imagination of the world with the focus on Reykjavik Iceland where a 29-year old American named Bobby Fischer (Tobey Maguire) challenged the best chess player in the world, Soviet grandmaster Boris Spassky (Liev Shreiber), in “Pawn Sacrifice.”

Edward Zwick directs the script by Steven Knight from the story by Knight, Stephan J. Rivele and Christopher Wilkinson. Fischer’s Cold War triumph against Russia’s best chess players, including the once thought-invincible Spassky, brought the young man to world acclaim but at a serious cost to the troubled genius. “Pawn Sacrifice” (the title has double meaning) tells the story of the momentous match that will be a feather in the US cap with the symbolic victory in the Cold War with the USSR. “Pawn Sacrifice” leads off with the life of young Bobby Fischer from age six, when he started to play chess, through his formative years as he becomes the world’s youngest grandmaster of the game. As Fischer rose up the ranks, he became a celebrity and America’s David in the upcoming battle with the Soviet Goliath, Spassky. But, the story is not just about the historic 21-game match between the best at chess in the world. Zwick delves deeply into the psychological strain on Fischer, who is shown to suffer from paranoia and increasing mental disabilities. He makes outrageous demands on his manager (and, maybe CIA handler?), Paul Marshall (Michael Stuhlberg), like a cut of the gate, a Marine guard and that no audience or cameras at the match. And, he refuses to be interviewed by the world press. While “Pawn Sacrifice” deals with Fischer’s victories, it also deals with the impact the event has on the man. Maguire gives a solid performance as the increasing delusional chess master who, as one meaning of the title can be interpreted, was the lowliest piece on the chess board of the Cold War.