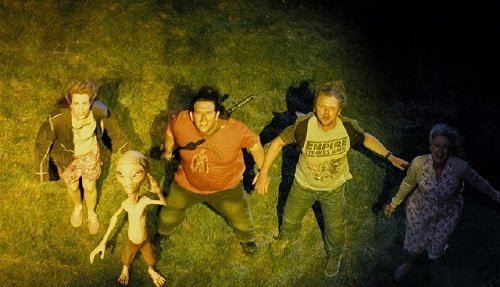 Graeme Willy (Simon Pegg, "Hot Fuzz") and Clive Gollings (Nick Frost, "Hot Fuzz") are Englishmen who fancy themselves comic book writers. After meeting sci-fi graphic novelist Adam Shadowchild (Jeffrey Tambor, "Win Win") at ComicCon, the two are on cloud 9, but they intend to continue their adventures with an RV trip to places such as Area 51, its White mailbox junction, and Vazquez Rocks, made famous in an episode of 'Star Trek.' But the duo get more than they bargained for when they pickup an extraterrestrial hitchhiker on the lam from the F.B.I. He's been held at Area 51 since 1947 and shaped the American idea of the little green man via Steven Spielberg movies, lunchboxes and bumper stickers. His name is "Paul."

Star/cowriter Simon Pegg wrote two terrific genre parodies, "Shaun of the Dead" and "Hot Fuzz," with director Edgar Wright. "Paul," which he cowrote with Nick Frost, his costar of those two films, is less a parody than a buddy bromance mired in adolescent homophobia with a lot of direct references to "E.T." and "Close Encounters of the Third Kind," as if just the idea of those films, or the casting of "Aliens'" Sigourney Weaver, should be a crackup. And yet when the writers get away from the Spielberg references and look to the American Heartland of good old boys and campgrounds run by creationists, the film can be quite funny. Still, there is an over reliance on probe jokes and the like and, in the end, "Paul" is only just good enough. From the onset, Pegg and Frost are simply too old to be doing the fanboy Geek thing, but they wear their t-shirts well. They gape over the white mailbox, do reenactments at Vazquez Rocks and are fussed over by Pat (Jane Lynch, TV's 'Glee') at the Little A’Le’Inn, who adds a sparkler to Graeme's martian shake. When Paul (voice of Seth Rogen) arrives, Clive passes out and pisses his pants, but Graeme takes rather quickly to the little smoking green man. It doesn't make much sense that Clive would attack Paul, sitting in the RV's passenger seat chatting away to best friend Graeme, except in a jealous rage, an emotion which gradually worms its way in. Clive's got more cause for worry when the threesome pull into a desolate campground and Graeme sets eyes on Ruth Buggs (Kristen Wiig), a creationist who must be shown Paul in order to rock her world. Freed, Ruth is determined to do lots of swearing, kissing and fornicating, but her dad, Moses Buggs (John Carroll Lynch, "Gran Torino"), joins the pack hunting them down. There's little amusement to be found in the F.B.I. subplot. Dumber than dirt agents Haggard (Bill Hader) and O'Reilly (Joe Lo Truglio, "Superbad") get involved in high speed chases and Haggard figures out what's going on when he picks up his superior, Agent Zoil (Jason Bateman), talking to 'the big guy' (Weaver) on his airwaves. The best laugh comes when O'Reilly fails to spot Paul, using E.T's freeze trick from Gertie's closet, in a general store. Everyone comes together where Paul's story started, outside the farmhouse of Tara Walton, the little girl whose dog Paul was landed on and who has grown up (into Blythe Danner) labelled as a crackpot. As the material is less parody and more silly, referential buddy caper, one cannot lay the blame entirely upon director Greg Mottola ("Superbad," "Adventureland"), but he does take a step back with "Paul." The pacing's choppy and some of the comic reaction setups are real moldy oldies. What he does best is incorporate the wonderful CGI creation that is Paul (Rogan gives great, droll line readings) into the action seamlessly. Most of the laughs in "Paul" are those of recognition ('Get away from her you b*%$,' Gertie's Cafe, Devil' Tower, Star Wars cantina music etc.) than true humor. Kristen Wiig does yeoman's work as the former bible thumper parsing together hilariously wrong swearing. And just what does "Lorenzo's Oil" have to do with anything? "Paul" may be the beginning of the year of Spielberg nostalgia, with J. J. Abrams' upcoming "Super 8" looking like a more serious minded homage. Abrams is the one to hang hopes on, because "Paul" only really works as a genial stoner buddy movie.