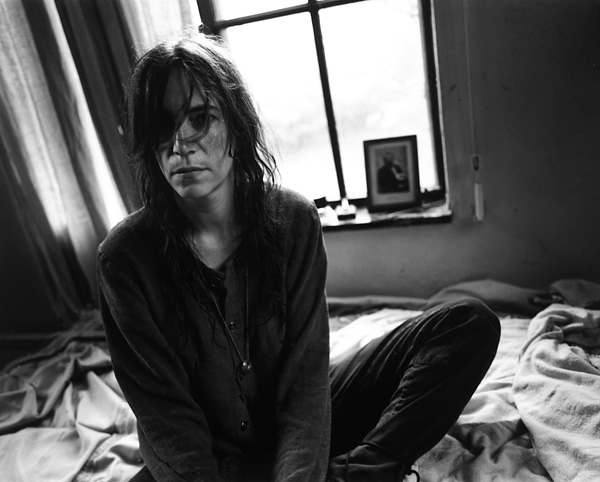 Music icon Pattie Smith is the subject of the bio-doc by first time feature documentary filmmaker Steven Sebring. The freshman docu-maker wears many hats as he tells the story of “Patti Smith: Dream of Life.”

Fashion photographer Steven Sebring, who began life as a farmer, carpenter and mechanic in Nebraska and Arizona, was suggested to Patti Smith by R.E.M.'s Michael Stipe for a Spin photo shoot in 1995. Sebring was drawn to the woman he got to know, but was blown away when he saw the transformation that occurred when she took a stage and asked if he could document her just as she was coming out of a sixteen year hiatus a year after her husband Fred 'Sonic' Smith's death. The project would last over ten years and Sebring has created an impressionistic biopic of the poet/activist/rock star/mother/model/artist in "Patti Smith: Dream of Life." Sebring followed Smith on a tour that would take her to Paris, Japan, Israel and New Zealand and a life that moved from her family nest in Detroit back to her artistic roots in New York City. Along the way he captures every aspect of this extraordinary woman as she relates to her children, Jesse and Jackson, her band, other artists and the crowds of concerts and anti-war rallies. His 16 mm camera is usually threaded with black and white film, but sometimes color, and his images are sometimes direct, but often dreamy and filled with dust motes descending through the light. To ground all these experiences, Sebring also set up Patti in her bedroom to add some narration, all of which she improvised. In fact, Patti summarizes her entire life, from her Chicago birth in 46 to the present in a matter of minutes and even the Cliff Notes version is an extraordinary account. Her mutual muse, Robert Mapplethorpe, who she met in 1967, comes through as the strongest influence in her life, but there are many and the stories range from the anecdotal to the mystical to reminisce on artistic creation (a moving story about how her husband so loved a song of hers, 'She Walked Home,' that Patti considered it his - a recording plays as she and her daughter walk through Central Park). Sam Shepard, who gave her her first guitar, jams with her in the present. Bob Dylan once tuned that instrument, she tells us, admitting to how she got more experienced musicians to tune her guitar by offering to let them play it. Author William S. Burroughs was an influence and a friend in the early days of CBGB's, but Smith also frequently notes Blake and Rimbaud. She recites poetry accompanied by Philip Glass and debates the most outrageous need to pee with Chili Peppers' bassist Flea. A visit to Patti's parents' house shows a typical American family get together, minus any dysfunction, but the loud ticking of a clock is an indicator of passing time and lives that is a constant undercurrent of this film. In her studio, Patti talks about her need to touch the brush strokes, something she can do with her own work (she was caught as a teen with her hand on a Mogdiliani) and suggests a wonderful link between Picasso and Pollack by way of a Horse. In her bedroom, a dress favored as a child is pulled out and we feel a history that leads up to her own children, whose jumpers were clean but never bleached. She describes human remains as not ashes, but something beautiful like broken seashells as she pours some of Mapplethorpe's into her palm. Patti Smith has a unique and wondrous perspective, a strong moral center, a great sense of humor and a creative spirit that has made her an icon. Sebring took his time filming it and takes his time letting his film unfold, but he has captured it all with a lack of convention that mirrors its subject.

Sebring takes on the task as director-writer-cinematographer-sound recordist-and-producer in chronicling the life, times and influence of, to some, a rock legend. Fans and those interested in Patti’s music will find this an interesting exercise. However, the filmmaker has bitten off lots more than he can chew and the result is a sometimes captivating but stilted document that should have been pared down considerably from its near two-hour run time. What should have been cut are the self-indulgent sequences where Sebring keeps his camera running far too long. Patti talking to different musicians (boring) rather than having them do their thing, said musicians camping it up for the camera, Patti’s visit to her folks with lengthy discussions interesting only to the family all contribute to make “PS: DoL” far less compelling than the rest of material. Where the documentary works is when it is about Patti Smith. She talks about the people who have influenced her, from Bob Dylan to Walt Whitman, William Blake, Robert Mapplethorpe and Allen Ginsberg, and delves into how each helped form her as a musician, poet and artist. Patti is also vehemently against the Bush administration and its Iraq War policy and pulls no punches, publicly or privately. Jam sessions with the likes of Sam Shepard, recording sessions with Phillip Glass as backup pianist and those that she influenced, like Flea of the Red Hot Chili Peppers, give an honest insight into Patti Smith’s life. One particularly amusing moment has Smith tell the story of her lending her classic 1931 Gibson acoustic guitar to Bob Dylan to play. She is spot on in impersonating the legend. Sebring succeeds in showing Patti Smith as a talented, compassionate together woman who knows what she is and what she wants in life. Unfortunately, there was too much fodder mixed in to hold my interest and I would have liked to fast forward through the numerous boring bits.