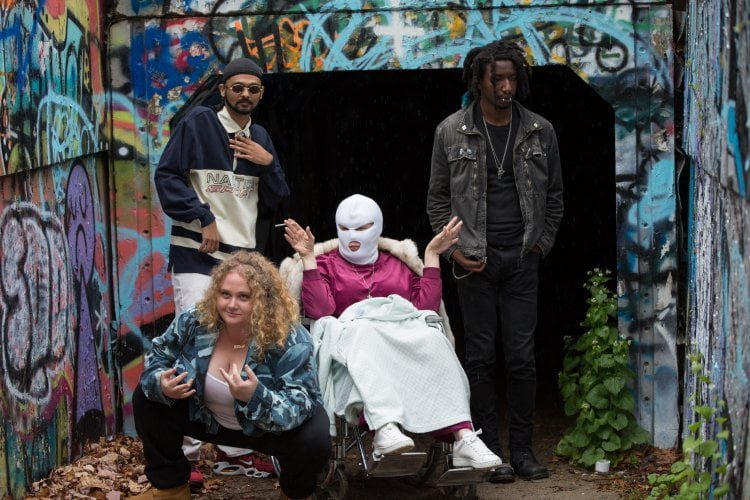 Patti “Dumbo” Dombrowski (Danielle Macdonald) is a Jersey girl who has grand ambitions to be a rap superstar. She and her best friend Jheri (Siddharth Dhananjay) will take their music wherever they can, even to a strip club, to find fame for “Patti Cake$.”

Twenty three year-old Patricia Dombrowski (Danielle MacDonald, "The East," "Every Secret Thing") works at a local dive bar and worries about her wheelchair bound Nana's (Cathy Moriarty, "Raging Bull") care and medical bills. She doesn't get much in the way of support from her mother Barb (cabaret artist Bridget Everett, "Trainwreck"), bitter over the failure of her 80's attempt at big hair rock. Unbeknownst to Barb, her daughter has her own musical aspirations, and with the encouragement of her best friend Jheri (spoof rapper Siddharth Dhananjay), mysterious punk rocker Basterd the AntiChrist (Mamoudou Athie, Netflix's 'The Get Down') and, yes, her cool grandma, Patricia emerges as "Patti Cake$." I've long railed against what I call Sundance altitude sickness, the propensity to overpraise Indies that disappoint upon general release (witness the last three years' grand jury winner and audience award winners). But the buzz on this one is legitimate despite its well trod story line. Writer/director Geremy Jasper, stepping up from music videos, makes his feature debut based on his own experience and does so with verve and imagination. Jasper also penned the film's original songs, which, as performed here by the fiercely luminous, embraceable MacDonald, should win over even those who aren't drawn to rap. Patti idolizes rapper O-Z (Sahr Ngaujah, Broadway's 'Fela!') and keeps a mental file of dirty limericks for her Nana's amusement. When she walks into a pharmacy, she's announced on the intercom by Jheri as the star he is sure she will be. When rapper Dan (McCaul Lombardi, "American Honey"), the pizza slinger she crushes on, starts a rap battle, she's shocked at the verbal abuse he directs her way, leaning on the nickname, Dumbo, that's dogged her since high school. But she comes back roaring, winning over the crowd. At a local VFW hall, she's exposed to Basterd, but her attempt to connect to the young black man with one milky contact lens goes nowhere, until she finds the shack he's squatting in on the outskirts of a cemetery loaded with recording equipment (the fact that none of this has been stolen from its unlocked storage is the screenplay's one overly fanciful notion). Their musical passion unites them, and along with Jheri and Nana they form PBNJ. Jasper occasionally alternates his gritty Jersey locations with fantasy segments, his own Patti music videos that encapsulate her dreams. Patti's daily struggles include sucking up to catering manager (Nick Sandow, TV's 'Orange Is the New Black') to make extra money, a gig that lands her in O-Z's mansion and a chance to impress mixing up a Green Goddess. Wisely, Jasper allows Patti no easy inroads and it is a connection made at a far more humble affair plus her complicated relationship with Barb that bear fruit. Jasper's biggest gamble was not only putting an overweight white girl in his own shoes, but casting the previously unmusical, Australian actress MacDonald as his lead. She is downright phenomenal in this role, creating a hugely sympathetic character without sentiment, rapping so rat-a-tat-tat one wonders how she breathes. Bridget Everett commands as a boozy loser clinging to a sex appeal she's worked years on destroying (her drunken karaoke routine is heartbreaking, her clear talent made pathetic). The almost unrecognizable Moriarty completes the three generation female household with crackle and spark ('Who's the colored kid with the cataract?' she asks upon being wheeled into Basterd's home), her raspy vocal providing the underlying signature track on 'PBNJ.' Dhananjay and Athie create polar opposites, the former all cheerful enthusiasm, the latter deep soulfulness. "Patti Cake$" is a musical, a dreamer-from-the-wrong-side-of-the-tracks coming-of-age tale and a family drama. There's even a dollop of romance in its air. Who knew the struggles of some New Jerseyites could leave us feeling so good? Grade:

I am not, by any stretch of the imagination, a fan of rap music. I grew up, music-wise, in the 1960s (when Rock n Roll ruled) and my tastes run more long the lines of The Beatles, Cream, Crosby, Stills and Nash, Guess Who and Simon and Garfunkel. Oh, and Gordon Lightfoot, too. So, “Patti Cake$” had a strike against it from this old hippie. The story: a kid with a lot of talent but from the wrong side of the tracks is undeterred in attaining his/her goal to become [plug in career ambition here] and triumphs in the end. The plug-in here is “rap star” and if this sounds familiar, it is. The often told and well-worn rags-to-riches cliché story has been around for a long time – “Rocky (1976)” immediately jumps to my mind. I would say that the “well-worn rags-to-riches cliché story” applies to “Patti Cake$,” except for one important thing: the film’s star, Daniela Macdonald as the title character. The Aussie transplant gives a powerhouse performance as the overweight kid with a lot of talent – from an actor who has a lot of talent. The lyrics of her music have a working class anger that gives the film an energy level that even I appreciate. Bridget Everett, as Patti’s living-in-her-past-glory, boozing mom, Barbara, is well cast, looks wise. But her performance is what to watch whenever she is onscreen as she embodies a woman clinging to her past life. And, she has a hell of a set of pipes. First time feature director and scribe Geremy Jasper shows real talent telling an underdog story that has its own heart. With Macdonald, he makes you root for Killer P (another of Patti’s monikers) and does not go the typical success root. There is a believable quality in Patti's quest for greatness and the battle she faces to be great never deters her. Even if you do not like rap music, but appreciate good acting, filmmaking and indie energy, you will see the hidden gem that is “Patti Cake$.”