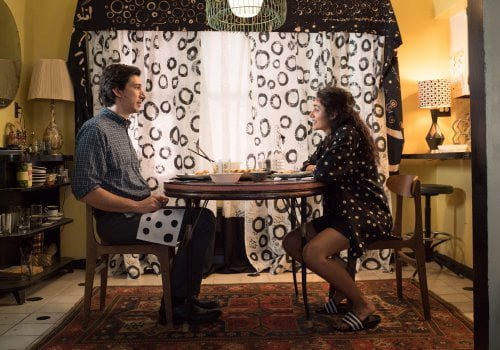 In the fading factory town of Paterson, NJ, a bus driver (Adam Driver, HBO's 'Girls,' "Silence") lives in a humble home with his artistic wife Laura (Golshifteh Farahani, "About Elly," "The Patience Stone") and their bulldog Marvin (the late Palme Dog winner, Nellie). He is a creature of habit, but as we follow his days throughout one week we see the simple things that inspire him to write the most beautiful poetry. We also note with much amusement the cosmic coincidences called to his attention, just like his own name, "Paterson."

This is my favorite film from writer/director Jim Jarmusch ("Only Lovers Left Alive") since being thoroughly enchanted by "Stranger Than Paradise" way back in 1984. With Paterson himself a spacey introvert whose art emanates from quiet observation and emotion and his wife Laura an extrovert who adorns herself and her environment, "Paterson" is about dreamers, opposites and the deep happiness found in an optimistic view of life. Each day is chaptered, Monday, like every day, beginning with an overhead shot of Paterson and Laura's bed. Each weekday, Paterson awakens and looks at his watch before admiring the beauty sleeping next to him. On this first day, Laura murmurs to him about her dream, in which they've had twins. 'One for each of us,' Paterson responds (he will henceforth see a set of twins every day of the week). But Laura only has one 'baby' and that is Marvin, the expressive English bulldog acting like a jealous lover despite his nightly walk with Paterson to Doc's (Barary Shabaka Henley, "Collateral") old world bar. Paterson takes over his shift from Donny (Rizwan Manji, "The Wolf of Wall Street"), his daily greeting met with a list of woes so hilarious the difference between the two couldn't be greater. He drives around his city listening to riders' conversations ("Moonrise Kingdom's" Kara Hayward and Jared Goodman are featured as a pair of teenaged anarchists discussing Paterson's own Gaetano Bresci), watching the world go by. He has lunch by the Falls (his metal lunchbox features daily pictures of Laura within its lid, small gifts and decorated snacks inside) where he writes the poems he's been formulating in his 'secret' notebook. (The poetry featured in the film is all written by Ron Padgett, four previously published, three written for the film, visualized on screen in script generated using Driver's own hand. Paterson's most famous poet, William Carlos Williams, is also featured.) Each day progresses much like the one before it. We begin to catch glimpses of Laura at home during the day, painting curtains, clothes and woodwork in her favored black and white. Laura begs Paterson to copy his notebook for safekeeping and he reluctantly promises to do it that weekend. She talks about her dreams of making her fortune with cupcakes and becoming a country and western star. On Wednesday she tells him she's ordered the Harlequin guitar he agreed to buy for her. He also encounters a man (Method Man) rapping in a laundromat on his way to Doc's and offers encouragement. Thursday is the film's longest day, leading up to the weekend's crescendo. After work, Paterson meets 'another woman,' a young girl (Sterling Jerins, "The Conjuring") who reads him her poem 'Water Falls.' She's a twin who turns out to be Paterson's spiritual one. At dinner, he notices Laura has hung a picture of his favorite place, 'The Waterfalls.' At Doc's that evening, events begin to escalate. After discussing his 'wall of fame' (Lou Costello is the most prominent figure, but Jarmusch slyly inserts his "Gimme Danger" subject Iggy Pop) and the continuing saga of Everett's (William Jackson Harper, TV's 'The Good Place') spurning by Marie (Chasten Harmon), Doc his chewed out by his woman in front of all his customers. Friday begins an upswing for Laura, whose guitar arrives, but a downturn for Paterson, whose bus breaks down. He'll be further shook up when Everett gets dramatic at Doc's that night. That day, Paterson's written his most unabashed love poem yet (an ironic turn of events as it turns out). The weekend will be time for celebrating Laura's successful cupcake venture at the local farmer's market, dinner and a movie (black and white, of course), but Marvin's competitive nature comes to the fore while they're out. The production has a dreamlike quality, both visually and aurally when it isn't simply reflecting everyday life with compositions that frequently recall Edward Hopper paintings. Images outside of Paterson's bus windows dissolve into another, light refracts, voices and external noise come into and out of focus. Jarmusch repeats shots, but they're always different, sometimes obviously so (the daily opening bed overhead), other times more subtly (the exterior of Paterson's home in dawn, dusk, daylight and evening). He also repeats lines of poetry as Paterson works out his latest or remembers those of another, the nobility of Ohio Blue Tip matches assured after this. Art direction is full of repeating motifs. Adam Driver is perfection here, the essence of a polite, supportive romantic, his head in the clouds but his feet firmly planted. Jarmusch's strong writing and directorial hand keeps Farahani just shy of becoming a manic pixie dream girl (one wishes one knew just what brought these two together). The film concludes beautifully, Sunday bringing a new beginning by way of "Mystery Train's" Masatoshi Nagase. Grade: