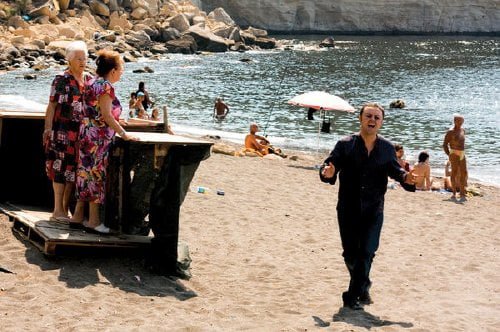 In 2009, actor/director John Turturro and his documentary team journeyed to Naples, Italy to explore the influence of music and dance on the Neapolitan landscape. The result is a toe-tapping expression of joy that captures the heart of the viewer with its “Passione.”

Now here's something different - a look at how centuries have shaped a city and its citizens through its music. Some have described this as one long music video, but it's not anything like that, even if a few of its segments are. Turturro pops up occasionally as a guide (and as a dancer in one of the more music video-ish numbers) and many of the musicians he's chosen also speak about love, passion, prostitution, prison and the racism which cropped after American WWII GIs left behind Black babies. One of these, James Senese, plays the title song on sax. The tattooed Pietra Montecorvino sings about walking the streets, then reinvents herself later for a quite different take on Naples and oh, what a voice. Gennaro Cosmo Parlato showcases Naples most dramatic elements, performing about the city (see picture above) with black tears streaming down his face. Camerawork and editing are terrific, with one number deftly balancing a band, a dancer (flamenco!), architechtural details and kids on the street to make one whole impression. We see the city's Morrocan influence in 'Lay That Pistol Down,' an incredible number performed by three disparate singers which starts off as what can best be described as an Irish jig! The film has a couple of late going faults - the greatness of Caruso is debated, then not followed up with any archival footage of Caruso and the film's closing number is its weakest, but this is definitely something very unique and often mesmerizing.

Turturro brings us to one of the great crossroads of the world – Napoli. While museums, scenery and food could be the focus of the film, all of which Naples has in copious, the filmmakers aim their cameras and microphones at the singers and dancers of that city. The result is an exciting, energetic tome about sound, motion and their influences on day to day life in Naples. The dancing, featuring the many beauties of that beautiful city, is vibrant in movement and color and the energy these dancers display tired me out. (Ah, to be young again.) However, the music, with songs of infidelity, romance, sorrow and joy, is my draw to “Passione.” The varied influences from around the world are obvious as the broad tapestry of music plays out. We hear the sounds of Arabia, North Africa, American R&B and Portuguese fado music and all are evident in the compositions that have evolved in Naples since the year 1200. Although shot on a small budget, the film’s techs are nicely crafted with cinematographer Marco Pontecorvo capturing the dancers and singers, and Naples itself, with clarity and fluidity, making me want to visit there some day. The rapid, deftly handled editing helps make this homage to a city and its music a joyful experience.