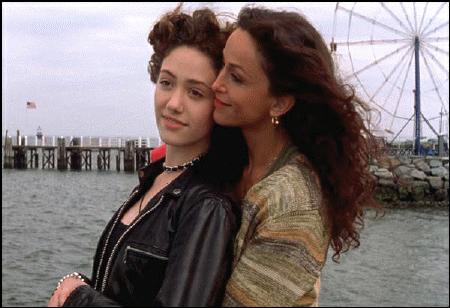 The fishing community of New Bedford, Massachusetts is a little piece of Portugal in America. Here Celia Amonte (Sofia Milos, TV's "C.S.I.: Miami") raises her seventeen year old daughter Vicky (14 year old Emmy Rossum, "An American Rhapsody") in the two-family home of her mother-in-law Angelica (Lupe Ontiveros, "Real Women Have Curves") while still mourning the loss of her husband Joseph (Anthero Montenegro) seven years before. Vicky, under the already button-pushing guise of going out on Internet dates, has been gambling at a local casino where she meets card counter Charles Beck (Jason Isaacs, "Harry Potter and the Chamber of Secrets"). When he coincidentally catches Vicky's mom singing fado in a local restaurant he and Vicky make a deal - he'll teach her to count cards in exchange for getting a date with her mom in "Passionada."

Because it is a love story set within a distinct ethnic community, "Passionada" is being compared to "My Big Fat Greek Wedding," but this film is more rooted in realism than that Windex-infested sitcom. That said, while there are several good performances and a nice visual sense to the film, it suffers from an uneven story and characterizations. Vicky, for example, is wonderfully played by Rossum, but we're given little idea just what drives her to become a card shark or whether any of the dates she talks about are real. She does reject local fisherman hunk Gianni (Chris Tardio, "Analyze That"), a guy any woman would go gaga over, because he 'smells like his catch' and convinces her 'very married' widowed mom to go on a blind date with Roberto (Russ Vigilante), a crude idiot even a stranger would recognize as a mismatch. The Jermanok brothers do give her some amusing dialogue, such as advising Charlie about her mom 'Fish. She's comfortable with fish.' Then she tells him 'You can't predict what I'll say, but you can predict I'll say it.' Celia, on the other hand, one never doubts as a hard-working single mom fully focused on her teenage daughter. Sofia Milos gives her a sad-edged pragmatism and one believes Celia at least thinks she is content with what she once had. Milos is also convincing as a fado singer performing at the local Harbor House Restaurant (Portugal's contemporary fado singer Misia is heard on the soundtrack). Charles Beck is given a pair of colorful and wealthy friends, Lois (Theresa Russell, "The Believer") and Danny Vargas (Seymour Cassel, "The Royal Tenenbaums"), whom we must presume are former scam partners. His pursuit of Celia is amusing, but Charlie is forced to carry a fake facade (he's got nothing, but borrows the Vargas's Jaguar, yacht and home and invents a fish processing business) to create third act conflict and it is carried on to a degree only seen in movies. Isaac has some nice chemistry with Milos, but he acts overly earnest when he must to win her back. Mother-in-law Angelica is straight from the cliche book, a seemingly disapproving older woman who dispenses crowd-pleasing advice when it's 'least expected.' During New Bedford's annual Feast of the Blessed Sacrament, Angelica is swept onto the dance floor by local fish monger Anthony (Luis Colina, "The Crow: Salvation") in a clear play for tri-generational romance (Gianni has also succeeded in getting Vicky to spend some time with him here) that doesn't work because Colina appears to belong to Celia's age bracket. Old pros Cassel and Russell are solid and hilarious support. Russell nimbly fixes her hubby a martini in a booth at the Shawmut Diner from a portable mini-bar (including cocktail shaker and olives) she apparently keeps on her person. She's in love with love and coaxes whomever she can to propel old friend Charlie's chances with Celia. Cassel is less wielding behind his ever present smile (and martini) and is most amusing posing as Charlie's employee on his own yacht. Despite the uneven screenplay, director Dan Ireland ("The Whole Wide World") does a good job creating a specific type of life. Production designer John Frick ("Spy Kids 2: Island of Lost Dreams") gives New Bedford perhaps a quainter sheen than the blue collar fishing town really has, but it's nice to see the Amontes living in a real working class two-family house filled with flamenco dolls and other native bric-a-brac. Cinematographer Claudio Rocha ("The Whole Wide World") captures harbor activity during advantageous lighting times and deposits us into a festive crowd, but he shoots a seductive foodie scene like a menu card from Denny's with straight overhead shots of various Portuguese seafood dishes. Fortunately the romance the food inspires is more intimately shot. "Passionada" is a romantic fish tale that could have used a little more finessing, but it's heartfelt and Milos and Rossum have a solid mother-daughter vibe.

Celia Amonte (Sofia Millos) is a beautiful widow in her mid-30's living in the Portuguese-American fishing enclave of New Bedford, Massachusetts. She lost her beloved husband to the sea seven years before and has not stopped mourning her loss - despite her teenaged daughter Vicky's (Emmy Rossum) attempts to get her dating again. But, when an unlikely stranger, Charlie Beck (Jason Isaacs), an Englishman and professional gambler, comes to town, Celia begins to feel a passion she thought was long lost in "Passionada." This is the story of three generations of Portuguese woman - Vicky, Celia and Angelica (Lupe Ontiveros), Celia's mother-in-law - living together in their two-family home in New Bedford. Celia, the dutiful wife, has suffered the loss of her husband stoically, but alone, as is the tradition for the woman in the Portuguese community. Vicky, however, has other plans as she surfs the Internet looking for a suitable match for her mom. She finds a young stud on the web, a real hunk, and Vicky sets up a meet - much to Celia's chagrin. When Vicky isn't trying to find a man for her mom, she spends her time sneaking off to the local gambling casino to try to learn the art of counting cards in blackjack. She meets another gambler, a professional, named Charlie Beck (Jason Isaacs), who gets unceremoniously booted off of the premises for his own card counting. Later on, while Charlie and his friends visit a local eatery, he sees Celia onstage singing a mournful Fado song (Fado is the heartfelt Portuguese folk music). Her beauty and her soulful voice smite him, but she, faithful to her late husband, refuses his advances. Charlie can't get Celia out of his mind, finds out her name and address and pays an impromptu visit to her home. Again, Celia rejects him but Vicky cuts a deal with Charlie - she'll guarantee a date with her mom if he will teach her all of the tricks in bilking the casino in blackjack. Charlie, of course, agrees and the slow, steady dating ritual of a mature couple begins. But, Charlie, who drives a vintage Jaguar XKE convertible, is not the wealthy man he appears to be. Dan and Lois Rasuk (Seymour Cassel and Teresa Russell) are longtime friends of Charlie and the real source of his apparent affluence. The underemployed gambler takes a bit of advantage of his friends, not that they mind, and besides using their sports car, also begs to borrow Dan's prized yacht (with Dan on board as the "captain"). Charley and Celia have a lovely summer's day outing and the romantic attraction and passion is set into motion. But, Charlie's secret is bound to come out and Celia will need to make a choice. "Passionada" is better film than it has a right to be. The slight romantic story has been done many times before and the happy ending outcome of the film is a given - you know from the start what will transpire. But, the caliber of the actors, the deft hand of director Dan Ireland and the fine look of the film make this a better than average outing. Sophia Milos has the poise and beauty to command the attention of the camera. She puts a melancholy, wistful spin on her Celia when we first meet her on the anniversary of her husband's death. She is bound by tradition to remain a widow and mourn her loss, but the passion she keeps bottled up inside is uncorked when she opens her heart to Charlie. Milos is so convincing as the beautiful Celia it was a shock to be reminded that she also played (very well) Annalisa Zucca, the tough mob boss who goes up against Tony Soprano in the HBO series "The Sopranos." I hope the actress gets more screen time. Jason Isaacs is proving to be an incredibly versatile actor who can play any kind of role, from the evil British officer in "The Patriot" to the heroic Army ranger in "Black Hawk Down." In "Passionada" he does a fine job of breathing life into Charlie Beck and is a believable romantic lead. Emmy Rossum, as Vicky, is convincing as Celia's high energy, motorcycle-riding daughter. Lupe Ontiveros (one of my favorites) fits the bill as Angelica Amonte, Celia's mother-in-law. She appears to be reproachful of Celia's love interest but changes things 180 degrees with a short speech to her daughter-in-law about love and loss. Filling in the background, wonderfully, are Seymour Cassel and Teresa Russell as Charlie's very good friends. The technical aspects of "Passionada" also help to make this a cut-above average movie. Claudio Rocha's lensing bathes everything in a soft, summery glow that compliments the New Bedford location and the handsome cast. The production makes the location seem like a beautiful foreign land instead of a New England fishing community. Smart marketing could get "Passionada" some decent box office if they play it in the numerous Portuguese communities - it is already pretty popular in New Bedford. It is also the kind of film that could generate some general attention with femme auds looking for a quality romance, attractive characters and a sweet, sometimes funny story.