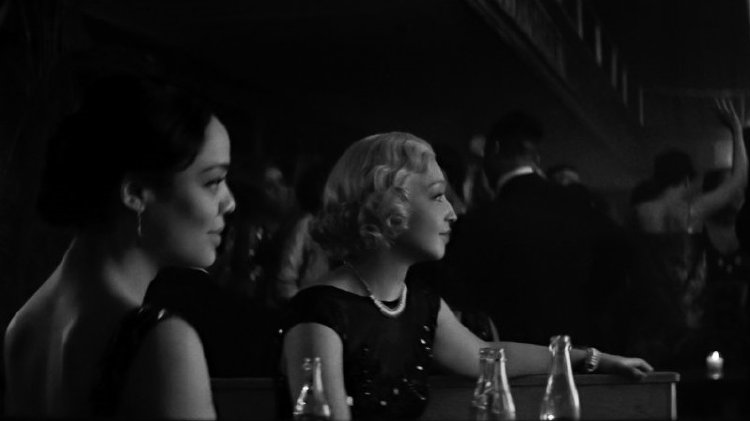 After shopping for a birthday present for her son in a New York City wilting from heat, Irene Redfield (Tessa Thompson) gets into a cab whose driver suggests she cool off at The Drayton, where there is always a breeze.  Dipping her head beneath her cloche as she passes its white doorman, Irene sits in a bright conservatory sipping tea when she notices a woman across the room.  Clare Kendry (Ruth Negga) approaches, an old friend not seen in years, and convinces Irene to join her for a more intimate chat in her suite and Irene learns Clare’s white husband, John (Alexander Skarsgård), not only believes his wife is white but openly admits he hates Blacks.  Clare has forced her friend into “Passing.”

For her first turn behind the camera, writer/director Rebecca Hall adapts Nella Larsen's 1929 novella, a book that reflected the history of her own maternal grandfather.  Shot in black and white (cinematography by Eduard Grau) in a 1.33 : 1 aspect ratio, Hall’s period film is refined and elegant on the surface, insidious undercurrents roiling underneath.  There is a remarkable amount of subtext in Hall’s film which explores not only race, but class and sexual identity, its two main characters utterly different sides of the same coin.  “Passing” is one hell of an audacious filmmaking debut.

After having observed Clare’s luxe surroundings visiting New York from Chicago, we move into Irene’s well heeled world in Harlem.  She lives in a multi-story brownstone with her husband, Dr. Brian Redfield (André Holland) and sons Ted (Justus Davis Graham) and Junior (Ethan Barrett).  She spends her days with charity work for the Negro League and napping by an upstairs window, her evenings divided between social gatherings and protecting her sons from her husband’s attempts to prepare them for the outside world, Irene’s own way of denying her race.  When she arrives home from that shopping trip to find Brian asleep in a chair, she lovingly slips his shoes off, then cradles his face, kissing him as he awakens.  Brian’s reaction tells us that this is unusual and indeed, later we will witness Irene keeping his romantic overtures at bay – is she denying more than her race?  She’s been ignoring a series of letters from Clare, who has since moved back to New York, until one day Irene’s maid Zulena (Ashley Ware Jenkins) opens the door to none other than Clare herself.

Irene is flustered, but regains her composure, covering by pointing out the potential danger Clare has put herself into just by coming to Harlem.  And here lies the difference between the two – while Irene considers herself a genteel woman of high morals, Clare chases the good things in life, however ‘unsafe’ that makes her.  Soon she’s become a permanent fixture in the Redfields’ social life, Irene both foisting Clare upon her husband, then fretting when Brian’s attentions remain fixed.  (It is of note that ‘Reenie’ is also unsettled when she finds Clare sitting outside with Zu, pointedly ordering the maid back into the kitchen as she takes her seat.)

The Harlem Renaissance the film is set within also gives Hall a chance to explore the era’s equivalent of cultural appropriation, a type of ‘exotic tourism’ which brings esteemed writer Hugh Wentworth (Bill Camp) and his wife to Irene’s society dances.  Thompson’s verbal sparring with Camp is one of intellectual equals, something Camp shows appreciation for in Hugh’s eyes.  Hall has assembled a terrific cast and Thompson is more than up to the task, the actress signaling all kinds of emotion in between the lines, her demeanor and diction perfect for Irene’s time and station.  Negga makes Clare difficult to pin down, all desperate loneliness for her friend one minute, knowingly taking advantage the next, a ‘life of the party’ who is both engaging and exhausting, sympathetic yet suspicious.

The film’s production has been very specifically tuned to its subject, Hall’s voice distinctly feminine and intellectually challenging.  In the press notes, she relates a serendipitous meeting with David Bowie, one of the only people she’d met who’d read Larsen’s book (of course!  A book about someone presenting themselves as ‘other’), whose encouragement spurred her on, just as she learned a piece of inspirational music she ended up using throughout was by Ethiopian exile Emahoy Tsegue-Maryam Guebrou and called ‘Homeless Wanderer.’   Hall may humbly find her first foray into filmmaking guided by luck, but she exhibits talent to spare.  “Passing” is one of 2021’s most riveting, though provoking films.