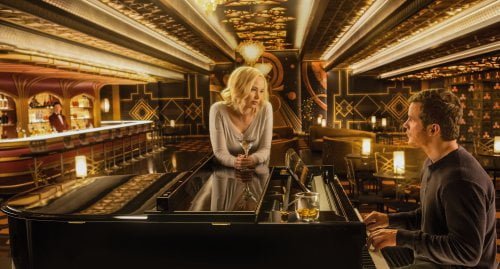 As the Starship Avalon travels on autopilot through space on a 120 year journey to a colony called Homestead II, over 5,000 rest in hibernation pods. But the ship hits a particularly large debris field which cause a series of malfunctions. Pod 1498 containing Jim Preston (Chris Pratt) opens up and the disoriented man wanders about trying to find answers until the observatory's computer informs him they are 90 years away from their destination. Preston spends a year alone but falls in love with Aurora Lane (Jennifer Lawrence), a beautiful young writer whose words move him and wrestles with the morality of waking her up to his own fate in "Passengers."

The marketing for this film has been selling it as a love story in space, but that's not entirely accurate. It's difficult to understand why Jon Spaihts' ("Prometheus," "Doctor Strange") screenplay was put on the Black List as it is essentially a pile of contrivances supporting science fiction concepts we've seen before and a moral question it neatly sidesteps. Director Morten Tyldum ("The Imitation Game") has delivered a good looking film with two good looking stars that's entertaining enough, but in the end one walks away thinking 'Is that all there is?' Once Jim realizes his fate (a message he sends back to earth will not be delivered for decades), he takes the advice of the android tending bar. Arthur (Michael Sheen) suggests he 'live a little.' Having been denied the upgraded dining options for Gold Class passengers, Jim breaks into the Venice Suite and begins living large. After a year of overindulgence, Dance Party and basketball, the now hirsute Jim contemplates blasting himself into space but cannot quite push the final button in the air lock. He opens Aurora's pod and hides. Aurora goes through much the same initial reactions Jim did, but he's there to tell her how many options he's already tried. He's cautious, tormented by his decision, but eventually he asks her on a proper 'date' and the two's relationship turns romantic. But just as he's ready to pop the question with a ring he's crafted, Arthur innocently spills the beans. Aurora considers Jim's action tantamount to murder. This is certainly a heavy moral issue, but rather than explore it further, the filmmakers amp up the action. The small malfunctions which have been occurring more and more frequently take more serious turns (in one spectacular set piece, the ship loses gravity while Aurora is swimming in its ultimate infinity pool). Jim's character is offered redemption via the direst danger. "Passengers" is the type of movie that constantly undermines itself in setting up its plot. If there needs to be an obstacle because there is only one autodoc in the ship's medical space, so be it, despite the one to 5,500+ passenger absurdity. As the entire ship begins to break down, only one more pod ever opens, its crew member's (Laurence Fishburne) privileges needed to advance the story. We are told over and over that there is no way to go back into hibernation in an opened pod because one has never failed before, yet the explanation for its failure is a burned out chip. These kind of convenient events become exasperating. Jim and Aurora's explanations for why they're taking the journey also feel weak, especially given the film's overriding theme of the necessity human connection. The ship design is impressive, its concourse looks like a minimalist ocean liner's, its exterior a twirling spiral. A close encounter with a star as the Avalon slingshots around it is beautiful. But Arthur's lush piano lounge is so reminiscent of "The Shining's" Overlook Hotel, I kept waiting from him to pull an axe out from behind the bar (no fault of Sheen's who's quite good here). The film devolves into "Gravity" crossed with "Silent Running," it's wrap is too pat by half, leaving the viewer with more questions than answers. And why is Andy Garcia even in this film? "Passengers" is a missed opportunity, a film that has a lot going for it only to squander its pluses. It's a silly popcorn movie masquerading as something deeper. Grade: